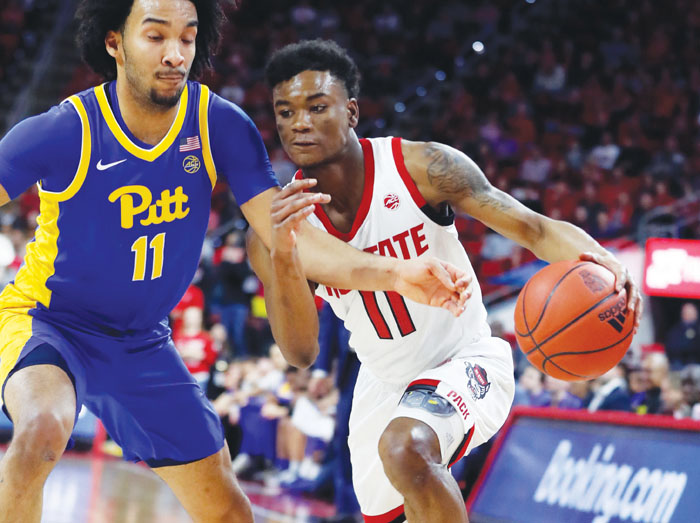 If the talk about bubble teams and NCAA Tournament bids was just about the number of wins and losses it would be a simple conversation.

But the Division I Men’s Basketball Committee uses the NET rankings and a four-tiered “quadrant” system to determine who is in or out. And that can be confusing.

Here’s a look at key elements to committee evaluations ahead of the March 15 bracket reveal:

The process starts with the NCAA Evaluation Tool, or NET.

The NCAA moved last season from the RPI to the NET, a more analytical formula incorporating factors such as game results, strength of schedule, game location, scoring margin and net efficiency for both ends of the court.

For example, Houston was No. 4, followed by Kentucky at sixth and North Carolina at seventh. Yet the committee reversed the order when putting each in the Midwest Region, with the Tar Heels as the top seed.

In short, it’s less about where teams stand in the NET compared to where their opponents do. And that’s where quadrants come in.

The NCAA adopted a four-tiered system for 2017-18 to better evaluate game results. It uses the NET to sort games from Quadrant 1 at the top through Quadrant 4, with games away from home carrying more weight.

It’s worth noting: game results can move between quadrants throughout the course of the season depending on the fluctuations of an opponent’s NET ranking.

“Quad 1” wins are the headliners on any resume.

For example, Kansas – No. 1 in the AP Top 25 – entered March with an 11-3 record in Quadrant 1. That record included wins on a neutral court against Dayton (third in NET) and at Baylor (fifth) along with losses at home to Baylor, to Duke (sixth) on a neutral court and at Villanova (13th).

Committee chairman Kevin White, Duke’s athletics director, pointed to Quadrant 1’s impact during last month’s reveal of the top 16 seeds so far. Gonzaga got the third No. 1 seed for the West Region ahead of unbeaten San Diego State, earning a potential closer-to-home trip to Los Angeles instead of New York for the East Regional.

“It’s such a fine line,” White said. “I think at the end of the day … it was the fact that the Zags had two really good wins – we thought maybe better wins – over Arizona and Oregon.”

Wins landing here still can help a team’s resume, even if they’re not of the headline-grabbing variety.

This is the most likely category for a team to suffer a “bad” loss.

For schools in the five power conferences (Atlantic Coast, Big 12, Big Ten, Pac-12 and Southeastern), this is where many games against teams near the bottom of their league standings end up.

While losses here can wound a resume, they don’t happen often. Last year’s 36 at-large teams went a combined 219-4 in Quadrant 4 as of Selection Sunday. That included St. John’s, Arizona State, Temple and Belmont – the last four teams in – going 39-2, with both losses by the Sun Devils.

There’s one other noteworthy component: schedule strength, particularly when it comes to what teams control outside of conference play.

Schakel scored 14 of his 17 points in the second half as the fifth-ranked Aztecs rallied for a 73-60 win over Air Force in the quarterfinals of the Mountain West Conference tournament on Thursday.

Schakel, who shot 1 of 5 in the first half, hit four 3-pointers in the second half for the top-seeded Aztecs (29-1), who rode a 21-3 run to their 13th consecutive quarterfinal victory.

Yanni Wetzell and Malachi Flynn had 16 points each for San Diego State.

, which is hoping to earn a No. 1 seed in the NCAA Tournament. After surviving the scare from Air Force, SDSU plays the winner of Boise State-UNLV in the semifinals.

AJ Walker scored 18 points for Air Force (12-20), which advanced by beating Fresno State on Wednesday. Walker came off a 24-point game against the Bulldogs.

“It’s Thursday, but it felt like a Saturday championship game the way the two teams played and slugged at each other,” Falcons coach Dave Pilipovich said. “We were good today. We did some really good things.”

Seniors Caleb Morris (12 points) and Sid Tomes (10 points) were the other Falcons in double figures.

“Credit to them,” Tomes said. “That’s why they’re ranked so high in the country.”

“I have a very coachable team,” Aztecs coach Brian Dutcher said. “I’ve told them I’m tired of teams shooting over 50% on us in the first half. So they let Air Force shoot 60. They followed my instructions.”

“A lot of the shots were just good shots on their part,” he said. “We have to give credit where credit is due.”

But the Falcons shot just 27.3% in the second, opening the door for the Aztecs.

Air Force took a 44-39 lead on Morris’ 3-pointer. After a dunk from Wetzell, Schakel then hit back-to-back 3s that gave San Diego State its first lead since early in the first half.

Matt Mitchell hit San Diego State’s fifth 3 of the half for a 60-47 lead with 7:05 remaining, capping off the run.

“They had their run, and they played like their season was on the line,” Wetzell said. “We do definitely have to get off to a better start.”

San Diego State improved to 33-15 all-time in the Mountain West tournament, while Air Force is 0-17 in quarterfinal games.

“We made some shots early, and when you do that, that basket becomes twice as big and it opens up a lot,” Pilipovich said. “Then you know it’s probably not going to continue that way, but the first half was emotional for us. It just fell into our lap a little bit.”