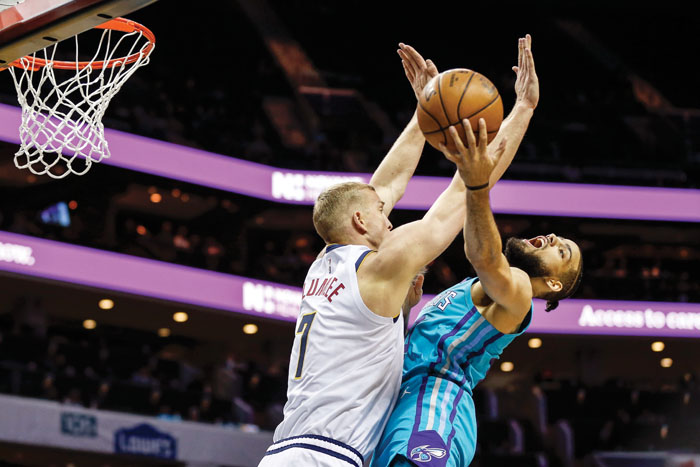 CHARLOTTE (AP) — Jamal Murray hit a running, off-balance 13-footer from the baseline with 5.1 seconds left and the Denver Nuggets overcame an eight-point fourth quarter deficit to beat the Charlotte Hornets 114-112 on Thursday night.

Murray had 18 points, and Nikola Jokic added 14 points, 11 rebounds and eight assists. The Nuggets entered the game in third place in the Western Conference, a game behind the Los Angeles Clippers.

Devonte Graham had 24 points and seven assists for the Hornets. P.J, Washington added 20 points and Terry Rozier had 19. The Hornets had a chance to win, but Rozier’s 3-pointer at the buzzer rimmed out.

Jokic became frustrated at times with the officiating, picking up his third foul late in the first half, his fourth just five minutes into the third quarter and fifth with 2:38 left in the game.

He argued with officials after a non-call under the Hornets’ basket, then wouldn’t allow Charlotte to inbound the ball, attempting to intercept the ball when an official flipped it to Graham because he wasn’t done discussing the call.

A short while later, Jokic was whistled for his fourth foul after pushing off against Cody Zeller and headed to the bench shaking his head.

The Hornets rallied to take a 94-86 lead with eight minutes left in regulation with Jokic watching from the bench. But the Nuggets battled back to tie it with five minutes left. On the tying basket, Will Barton threw an inbounds pass to himself off the back of Charlotte’s Cody Martin and dunked it.

The Hornets limited Jokic to six points, five rebounds and four assists in the first half, but the All-Star center was tough down the stretch, posting up and scoring and creating players for teammates with his passes. He scored eight points in the fourth quarter.

Hornets: A female fan who was sitting courtside took a forearm to the head from the 7-foot Zeller, who was hustling the save a ball from going out of bounds. The game was stopped briefly while she was attended to by medical personal. She left the game shortly after the collision and did not return to her seat.

Hornets: Wrap up a four-game homestand against Houston on Saturday night.

STEPHEN CURRY SET TO RETURN FOR WARRIORS AGAINST RAPTORS

SAN FRANCISCO (AP) — Stephen Curry is confident he has put his left hand through every possible test aside from actually getting into an NBA game.

He will get that chance Thursday night, when the two-time MVP is set to return following a more than four-month absence with a broken left hand to play for Golden State against the Toronto Raptors.

Curry said he is comfortable enough to play, though it may be months before his hand feels completely “normal” again to where he can compare it to the right side. Yet he still plans to play in the Tokyo Olympics this summer with the Team USA training camp scheduled to open in July.

“Hopefully, there aren’t any thoughts and I get to play my game the way I see it and just be able to react and make plays without having second thoughts or hesitation,” Curry said after shootaround Thursday morning at Chase Center.

“If I need to make a left-handed pass, no matter where it is, or finish with my left or defend and get a deflection or take a hit with it, that I’ll be able to do all that without thinking about it. Everything I’ve done to prepare, I’ve put it through every test I think possible without being in a game-like setting. I’m sure there will be some moments where it will pop in your head and kind of make sure it’s all right but after that you just keep playing.”

Curry said he is slated to play somewhere in the range of 24 to 28 minutes in his first game back — and reminded everybody he doesn’t much care for “minutes restrictions.”

The Warriors announced late Wednesday that Curry had been medically cleared to play and would be in the lineup Thursday in a rematch of last year’s NBA Finals, which Toronto won in six games. The two-time NBA MVP missed 58 games after falling on his left hand Oct. 30 versus Phoenix.

He practiced Monday with the G League Santa Cruz Warriors, then was recalled back to the NBA team later in the day.

“It was so much fun, for real,” Curry said. “One, just to be in a different setting. I’ve been grinding and rehabbing here for almost four months. It’s kind of a weird place where you’re with the team but you’re not really, so you get a different change of scenery, guys that were just excited to play and compete. We had a pretty good run.”

Curry, who turns 32 on March 14, had hoped to return last Sunday against Washington but his timeline wasn’t too far delayed. He is averaging 20.3 points, 6.5 assists and 5.0 rebounds over just four games this season. At 14-48, Golden State sits in last place in the Western Conference and had a nine-game home losing streak going into Thursday night.

He is eager to be part of the final 20 games, even if there will be no playoff runs this time after five straight trips to the NBA Finals.

“It’s about setting a goal so you can work toward that. Obviously, I understood the thought process, the extra four days, and going down to Santa Cruz and knowing we didn’t have enough bodies here to have that set up here. Nobody likes to wait more than they have to. I’m not the most patient guy, but understanding again the thought process, making sure everybody in the organization, the voices that matter, were in alignment on exactly when I should come back.”

Curry’s initial game back also will be his first on the court with Andrew Wiggins, who was acquired by the Warriors from Minnesota on Feb. 6 for guard D’Angelo Russell, guard Jacob Evans and forward Omari Spellman.

“I’m very excited. I feel like everybody is,” Wiggins said. “He’s the type of player that single-handedly he’s going to come and change the way everyone plays for the better. So, I’m excited. He’s a game-changer.”

Wiggins is scoring 20.1 points in his first nine games with the Warriors.

The Warriors have already ruled out Curry’s Splash Brother, Klay Thompson, for the entire season as he recovers from surgery last July 2 to repair a torn ACL in his left knee suffered in the decisive Game 6 on June 13.