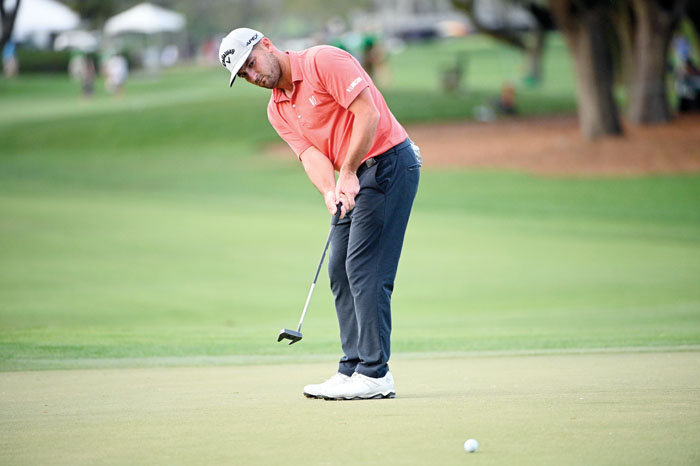 Matt Every watches his putt on the ninth green during the first round of the Arnold Palmer Invitational golf tournament, Thursday, March 5, 2020, in Orlando, Fla. (AP Photo/Phelan M. Ebenhack)

ORLANDO, Fla. (AP) — The leading two players at Bay Hill are no surprise, even if they have next to nothing in common.

Rory McIlroy, the No. 1 player in the world who hasn’t finished out of the top 10 in any tournament since September, shot a 6-under 66 on Thursday morning in the Arnold Palmer Invitational.

Matt Every, the No. 309 player in the world whose only two PGA Tour victories in 237 starts were back-to-back at Bay Hill, played in the tough afternoon wind and was one shot better with a 65.

Not only was it Every’s lowest round at Bay Hill, it was 20 shots better than his last round six days ago in the Honda Classic, when he shot 85.

Every, who served a three-month suspension at the end of last year for using cannabis that he said was prescribed legally for mental health treatment, played bogey-free and put on a clinic with his irons, the strength of his game. He poured it on his back nine with birdie putts of 35, 45 and 30 feet.

It wasn’t bad for McIlroy.

He avoided a big number early and delivered his best shot late for the best score among the early starters, when the wind only started to get strong at the end.

McIlroy had his sixth consecutive opening round of 68 or lower, another great start. It just didn’t feel that way early.

Trying to hammer an 8-iron to a back flag on his second hole of the day at No. 11, the ball landed short and left of the green and rolled into the water. He took a penalty drop, hit a pedestrian chip and escaped with a bogey by making a 10-foot putt.

“To hole that putt for bogey … making 5 instead of 6 there is a big deal,” McIlroy said. “One over through 2 instead of 2 over is sort of a different feeling. And to turn that nine around and turn in 1 under, I felt pretty good about myself going to the front nine.”

He made three birdies and an eagle — a 3-iron from a fairway bunker to 25 feet — and was most satisfied by taking advantage of easier scoring conditions.

Scottie Scheffler boosted his bid for a Masters invitation with a bogey-free 67 and joined Talor Gooch two shots behind. Scheffler, the player of the year on the Korn Ferry Tour, is No. 51 in the world and needs to get in the top 50 after the Match Play at the end of the month.

Another Masters hopeful, Christiaan Bezuidenhout, was in the group at 68 along with Keith Mitchell and Graeme McDowell.

Bay Hill was plenty tough even before the wind arrived because of the thick rough framing fairways and greens that became firmer and faster under a warm Florida sun.

It felt that way for Phil Mickelson in the afternoon and Adam Scott in the morning. Both shot 77. Only 18 players from the 120-man field broke 70.

Every, even with his Bay Hill victories in 2014 and 2015, had a round out of nowhere. His 85 at the Honda Classic last Friday is a little misleading. He was on his way to missing the cut when he was determined to hit the proper shot to a back pin on a par 3 over the water. He hit 5-iron four times into the water. He hit 4-iron onto the green and made 11.

“I wasn’t leaving that tee until I hit the shot I wanted,” Every said. “And I flushed every one of them, exactly in the same spot in the water.”

With two balls left, he went with the 4-iron. And he finished the round and signed for his score.

The card he signed Thursday was much better.

McIlroy has gone six consecutive events worldwide without finishing worse than sixth, so this was expected. Even after his bogey on No. 11, and missing a 3-foot birdie putt on the par-5 12th, he was never really bothered.

“One over through six, there’s still 66 holes left in this golf tournament,” he said.

He began turning it around with a 5-iron into about 25 feet for a two-putt birdie on the 16th, and a flawlessly played 18th hole with a 3-wood off the tee and a 9-iron to 10 feet behind the flag.

“Sort of had a bit of good pep in my step going into the first tee, and then I played some great golf after that,” he said.

It was that 3-iron from the bunker on the par-5 fourth that provided the strongest illustration that this is a player in full flight as the Masters — the only major keeping him from a career Grand Slam — is right around the corner.

His caddie, Harry Diamond, told him it was his best shot of the year. It’s early March. But it was special.

“I had 260,” McIlroy said. “I said to Harry, ‘If I can catch this 3-iron good and maybe pitch 10 or 15 yards short, maybe trundle up the hill’ … but short was always better than long. At it just came out perfectly and got up to pin high.”