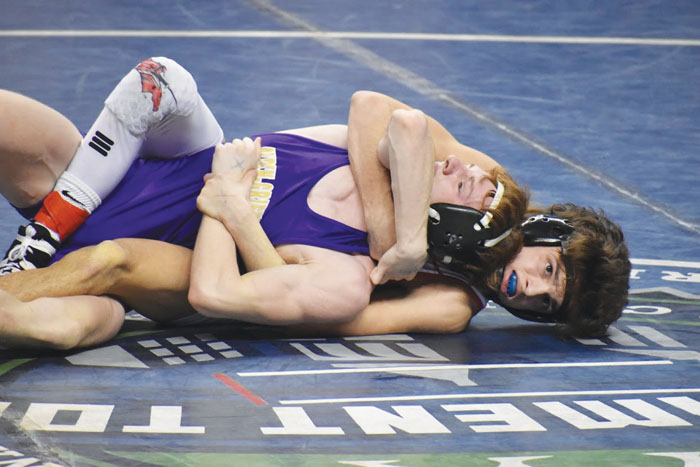 LANDIS —  In the 2A Midwest Regional and the 2A state wrestling championships, South Rowan sophomore 113-pounder Jacob Cox smashed opponents, 90-1.

Seriously. Ninety to one.

That’s an insane degree of domination at that level for anyone, much less a sophomore who may have two more state titles in front of him.

But Golden has never seen anyone control everyone in front of  him the way Cox did during his recent post-season march.

“Jacob is special, and it starts with just being focused, and I’d say super-focused,” Golden said. “He’s super-focused in everything he does, and that includes his academics. He’s up at the top of his class. Wrestlers like to fool around a little bit before practice starts, but as soon as Jacob gets to the mat he’s focused and ready to go to work. He’s wrestled almost his whole life. It’s really important to him.”

Cox was named this week as the Dutch Meyer Award Winner for 2019-20. That goes to the Rowan wrestler of the year as voted by the county’s coaches.

Cox remembers he started his love affair with wrestling in first grade, or maybe even kindergarten. His father is Adam Cox, a Northwest Cabarrus graduate who was state runner-up in 3A in 1998 and state champ in 1999 before wrestling at N.C. State. Cox is a respected club coach himself and got his son started in the sport early.

“I don’t take any credit for how good Jacob is,” Golden said. “His dad molded him into being great.”

From an early age, Jacob took to wrestling like a duck to water. Lots of workouts. Lots of tournaments. Lots of major competition, some of it at the national level. He’s battled some of the best in the country in the smaller weight classes.

“The biggest thing I have going for me is my drive,” Cox said. “I’ve got that, and I’ve got a desire to succeed and a desire to get better. I’m fortunate that I’ve had great workout partners like (East Rowan state runner-up at 120) Nate Burrage and Hough’s Richard Treanor. Richard is a two-time state champ at 113 in 4A and an All-American. After you wrestle guys like Nate and Richard, most of the matches aren’t that hard.”

While he’s technically a “little guy” in the wrestling world, Cox has linebacker arms from years of lifting and training.

“The first time I wrestled with him I was stunned by how strong he was,” Golden said. “I make sure not to get on the mat with him now unless he’s been going at it for a while and is tired.”

As a freshman, he was advanced enough and experienced enough that he believed with all his heart that he could win the state championship. He made a strong run at it on his first trip to the big coliseum in Greensboro.

“I’m in the semifinals, we’re tied in the third period, and then I made a mistake with 20 seconds left and my opponent (Reidsville’s Elijah Boyd) got a takedown,” Cox said.

That 4-2 loss didn’t end the tournament for Cox. He bounced back to beat two opponents. He finished third, a tremendous accomplishment for a freshman. He went 35-2.

Still, he left Greensboro feeling he’d let people down and  that he’d let himself down.

But in the weeks to come that disappointment gradually transformed  into additional motivation.

“I think only being third lit a fire under me,” Cox said. “I want to be the best.”

Last spring, about a month after the state championships, Cox wrestled at 106 pounds and went 6-2 in the High School Nationals held in Virginia Beach, Va.

“In a way it was intimidating because I was wrestling people that looked a whole lot bigger than me,” Cox said. “But then when you beat some of those people, it gives you confidence.”

Whipping some of the nation’s best was a springboard into a summer of constant lifting, workouts and wrestling, and Cox just got fitter, tougher and stronger as headed into his sophomore year.

Cox generally tore apart the competition this season and rolled through the 2A Midwest Regional without being scored on.

Durham came in and helped Cox prepare for the state tournament and Cox’s return to Greensboro.

There was a weather delay on the first day of the tournament that pushed the schedule back, but Cox said he used that unexpected day off to his advantage. It helped that he’d been through the state tournament before. He knew exactly what was coming and what he needed to do.

“We were already up there in Greensboro, so the delay wasn’t a big deal,” Cox said. “I worked out with Nate Burrage, and got myself really focused. Wrestling is very mental. You want to have the mindset that you can crush anyone.”

Cox won by technical fall (15-0) in the first round. He pinned his second opponent. The semifinal, where he’d been stopped a year earlier, proved no obstacle. He won 16-1, for another technical fall.

In the championship match, late on Saturday, he was matched up with an Ayden-Grifton wrestler, Landon Stocks, who came in at 46-6. Cox won 16-0, another dominant tech fall, and finished the season with a 53-3 record.

“The state tournament is no joke, but I never felt like I was in any trouble,” Cox said. “The people I train with had me very well-prepared. Every move anyone tried against me, I’d already seen it.”

Even after practically cruising to a state title, Cox is far from satisfied.

A day after the state championships, he was back in the gym, getting mind and body ready for a return trip to the High School Nationals in Virginia Beach.

“I finished in the top 16 to 24 last time, but this time I’d like to be in the top eight and make All-American,” Cox said.

He’s as good in school as he is on the mat. He makes all A’s while taking AP classes. His mother is a math teacher at Northwest Cabarrus, and he’s inherited that gene as well as the wrestling gene.

“Math comes easy to me and I also like science a lot,” Cox said. “History and English,  I’m not as excited about.”

Cox does have a life off the mat. He likes to hunt and fish. He enjoys boating in the summer months. The family lives near the Warrior, but he doesn’t list golf as one of his interests.

Wrestlers like to say that gold never gets old. Long-range, Cox would like to become South’s first three-time champion, but he’s well aware he has to win the second one before he can win the third one, so it’s one day at a time, one training session at a time.

He follows an Ohio State training program. He does eat, but it’s all healthy. Lean meat, avocados, fish and chicken are the items on the menu. Oatmeal is an occasional treat.

“I don’t want to eat anything that’s going to slow me down or is going to be hard to work off,” Cox said.

As far as wrestling in college, Cox is interested, but it’s going to depend on whether it fits in with his educational goals. He’d like to become an engineer.

But designing things is in the future. For now, he’s a wrestler.

“You know he’s going to keep going at wrestling as hard as he can year-round,” Golden said. “I’d expect him to move up in weight class as he naturally grows, but I do expect more state championships in his future. The drive and focus he has is very rare.”