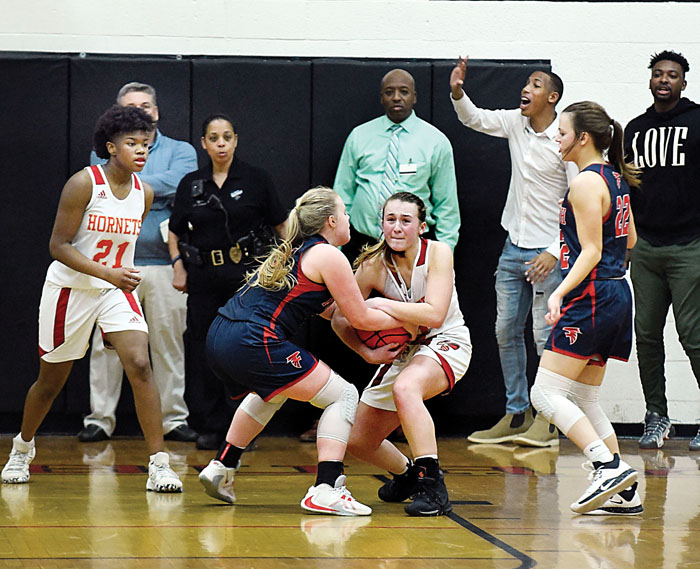 SALISBURY —  Salisbury’s girls basketball team will face its biggest challenge of the season on Saturday in the regional final — quite literally the biggest.

The next opponent is Newton-Conover’s Red Devils, and the third-seeded Red Devils (27-2) are centered around, by all accounts, a once-in-a-lifetime player,

Newton-Conover senior center Chyna Cornwell has signed with Rutgers University. It’s not just that Cornwell stands 6-foot-3, the problem is that she runs the floor like she’s 5-foot-3.

When Newton-Conover rallied to beat second-seeded East Burke in overtime in the fourth round, Cornwell blocked East Burke’s first three shots in the overtime and two more at the end of the game.

So that’s something new. Salisbury hasn’t encountered many shot-blockers.

For the season, she averages 26.2 points and 16.7 rebounds, and presumably, there have been a lot of blowouts where she sat down early.

If there’s a weakness to Cornwell’s game, it’s the free-throw line. She shoots only 49 percent from there, and that could be a serious factor in a close game.

Top-seeded Salisbury (29-1) had three routine playoff wins against overmatched opponents, and then put it all together and surprised quite a few people with a tremendous win against a seasoned Forbush squad on Wednesday in the SHS gym. Forbush had pounded the Hornets in the fourth round a year ago.

Senior Anayia Fulson leads the Hornets, who are coached by former Catawba star Lakai Brice. Fulson had 19 points on Wednesday and may have played the best game of a fine career. She’s scored 1,366 career points  and continues to move up the Hornets’ all-time list.

Sophomore Rachel McCullough has scored in double figures in seven of her last eight games. Freshmen Kyla Bryant and Jamecia Huntley scored in double figures on Wednesday, and the 5-foot-10 Huntley who will have to provide a lot of the defense against Cornwell, had a terrific rebounding game. Salisbury gets a lot of hustle plays from Jaleiah Gibson and Mary Morgan. They came through with tough rebounds in key situations on Wednesday.

Salisbury’s offense has been up and down, but a stingy defense has been a constant. Newton-Conover averages 66 points, but the Hornets would like to play this one in the 50s.

Saturday’s game will tip off at noon at Catawba Valley Community College in Hickory.

While regional games are technically at regional sites, this will basically be a home game for Newton-Conover, which is about 10 minutes away from CVCC.

Top-seeded Farmville Central and third-seeded Kinston are tangling for the East championship at 4 p.m. on Saturday at East Carolina.