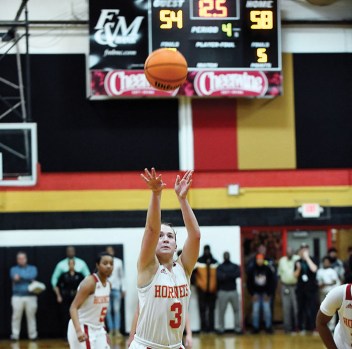 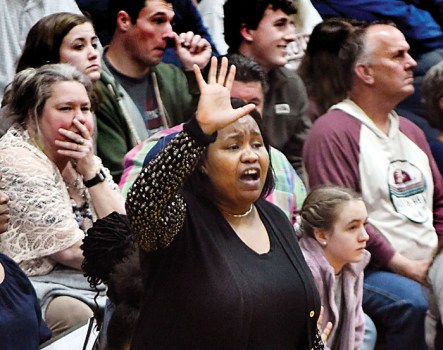 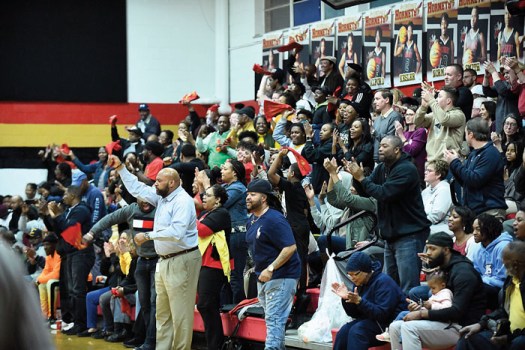 SAL's fans.. . photo by Wayne Hinshaw, for the Salisbury Post 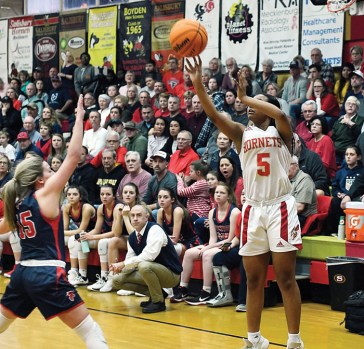 SAL's Kyla Bryant 5 shooting over over Hope Grimes 15. photo by Wayne Hinshaw, for the Salisbury Post 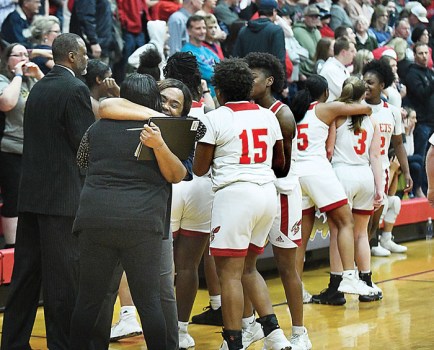 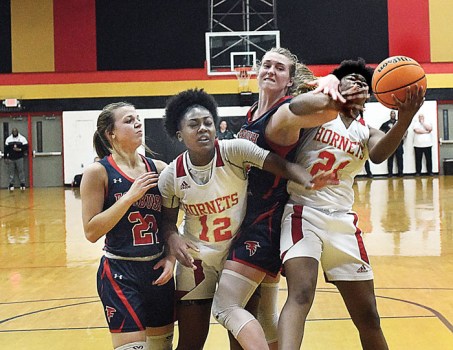 SALISBURY — They weren’t too young, after all.

Salisbury sophomore Rachel McCullough and freshman Kyla Bryant looked like nervous children in the first half, but they were feisty grown-ups in the second half, as the Hornets beat Forbush, 59-54, in an intense matchup in Wednesday’s fourth round of the 2A state playoffs.

Salisbury, a program that was an annual force on the state level a decade ago,  is officially back. The Hornets, with three freshmen and two sophomores in their top six, will play third-seeded Newton-Conover (27-2) on Saturday at noon at Hickory’s Catawba Valley Community College in the West Region final.

“We were the No. 1 seed, but I think just about everyone looked at us as the underdogs tonight,” Salisbury coach Lakai Brice said. “We are young, really young, but this is a special group. They’ve worked so hard to get here and they believe in themselves, the coaches and each other.”

Fourth-seeded Forbush  (28-3) brought a seasoned team to a packed Salisbury gym. Parkley Hennings, the all-time leading scorer for Forbush, was the centerpiece for the Falcons, but they also had two guards who signed with Catawba — Nicole Scott, the all-time assists leader at Forbush, and Hope Grimes, who joined Hennings and Scott in the 1,000-point club earlier this season.

It was the same group of girls that carved up Salisbury like a Thanksgiving turkey in the third quarter in the fourth round in 2019 and pulled away to win, 55-41.

Salisbury senior Anayia Fulson and freshman Jamecia Huntley were spectacular in the first half. Fulson was slashing to the hoop. Huntley was bouncing around like she was on a trampoline. They kept the Hornets in it, even after the Hornets lost Jaleiah Gibson in the second quarter to an injury. Gibson wouldn’t return to the floor until late in the game, but sixth person Mary Morgan, a freshman, filled in capably.

“Mary did great, did everything we asked her to do,” Fulson said. “She got rebounds. She made layups. She played tough defense.”

The 5-foot-11 Hennings had 16 points by halftime, including two 3-pointers. With Gibson down, and with Forbush leading 28-25 at the break, the Falcons seemed to be in fine shape to repeat last season’s win in the SHS gym.

At the break, McCullough hadn’t scored. Bryant had one free throw in the scorebook. Those are two of Salisbury’s top three scorers, and they’d been invisible.

“We had to get Kyla going, and we knew that,” said Brice, who is Bryant’s mother as well as her coach. “She hadn’t made a shot yet. We designed a play for her coming out of the half. That was a key time.”

The Hornets (29-1) executed. Bryant ran off screens, got open, and let it fly. Her 3-pointer from the left corner ripped through the cords. The game was tied, and the gym was electrified.

Bryant was a different player after that shot.

“The main thing that changed for me and for Rachel (McCullough) was rebounding,” Bryant said. “They were having to send two people to block out Jamecia, so Rachel and I had to rebound. We got rebounds in the second half.”

Fulson connected for a 3-pointer moments after Bryant’s big shot. Forbush answered, but then McCullough pulled up on a break and drilled a 3. And when McCullough gets hot, the Hornets are a handful.

They were great in that third quarter, all of them. They won the third quarter, 20-8, a reversal of last season’s third-quarter disaster.  When that wild quarter ended, the Hornets led 45-36.

But Forbush was a long way from done. Hennings made a 3-pointer to start the fourth quarter.

With 1:30 left, the crowd screaming and pleading, and Salisbury clinging to that one-point lead, Fulson put it on her shoulders. She headed for the rim and drew a foul.

Her first free throw was good. Her second shot missed, but it was the best miss of the season for Salisbury. Gibson was back in the game, and she wrestled for that offensive rebound. That led to a second-chance Fulson layup and a 56-52 lead.

“That was the biggest rebound of the game and Jaleiah went and got it,” Fulson said. “That was the rebound we needed to win tonight, and I can’t tell you how much I wanted to win this one. I’ve wanted to beat Forbush for a year.”

Forbush got back to 56-54 on a driving layup by Scott. She also was fouled, but she missed the free throw.

Huntley put Salisbury up 57-54 when she split two free throws with 24 seconds left, and now the Hornets were grimly defending the 3-point line.

Grimes got a clean look from straightaway with 12.5 seconds left, but several Hornets won the fight for the rebound and McCullough made the clinching free throws moments later.

“Rebounding was the thing,” Huntley said. “When I was getting a lot of rebounds we got hyped, and when they made it harder for me to get rebounds, my teammates got rebounds and that got me hyped.”

It was a game that lived up to the hype.

“Jamecia is just so athletic and Anayia is someone we can always depend on,” Bryant said. “They kept us in the game in the first half. Then, in the second half, we all played the way we can play. We wanted to prove ourselves.”

Brice credited coach Robert Hairston, a defensive guru who has been instrumental in the success of many Salisbury and West Rowan teams, as the match that got this Salisbury flame started.

“Coach Hairston is my mentor, and he gave me the foundation that’s built the program we have now,” Brice said. “Sometimes we turn it over and play young on offense, but we always play defense.”

Brice also is getting some coaching assistance from Andrew Mitchell, who guided North Rowan boys and Salisbury girls teams to state titles.