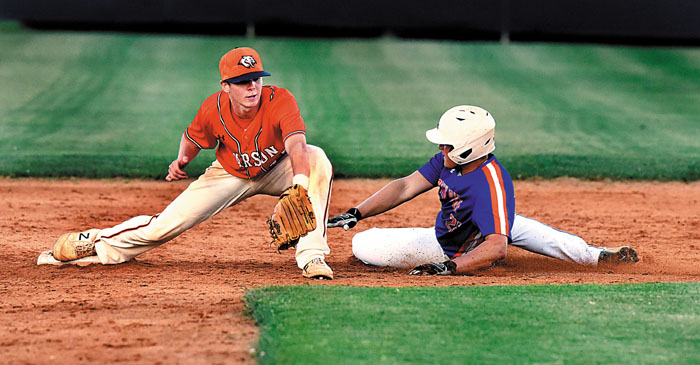 Wayne Hinshaw file photo/for the Salisbury Post ... Zeb Burns gets a force out at second base during the Marvin Ridge series.

CHINA GROVE — Carson graduated North Carolina Player of the Year Owen White, the best  in program history — and got even better.

The Cougars were a school-record 28-4 in 2019 and were one win away from playing in the 3A state championship series. Cole Hales took several steps forward. So did Deacon Wike. So did Luke Barringer, who hit seven of Carson’s 10 homers.

Now Hales, Wike and Barringer  have graduated, along with long-time catcher Garrett Alewine.

But everyone’s learned their lesson when it comes to Carson. No one is writing off the Cougars, who have averaged 21 wins over the last 10 seasons and are coached by Chris Cauble, the record-holder for baseball coaching wins at Rowan County high schools with 380.

“This is the second straight season we’ve lost our top guys and started over on the mound,” Cauble said. “But we’re looking for that next man up, and we’ve got guys who are capable of doing what Hales and Wike did last season. We’ve got some mound depth and we’ve got some good arms.”

Cauble is optimistic that Carson will be good enough on the mound that Aaron Misenheimer, the No. 3 pitcher last season, can be No. 3 again. Misenheimer is good. He was 5-2.

Catawba signee Ryan Street has been coming on strong since last season ended. He was impressive in the fall and scrimmages and opened this season with a five-inning shutout of Northwest Cabarrus.

“He got in the weight room and got bigger,” Cauble said. “We’re counting on him as our No. 2.”

Cauble is counting on lefty Logan Rogers as his No. 1. Rogers has battled some arm issues, but he’s ready for a big senior season.

“When we saw him as a freshman and sophomore, we thought he was good enough to be a No. 1 at some point,” Cauble said. “He was really good in the preseason, and now we’ve just got to make sure he stays healthy.”

Catching may be fine, but it’s not settled yet. Alewine won’t be easy to replace. He was exceptional defensively for many years and he delivered key hits.

The catching candidates are Richard Prange, whose family relocated to Rowan from Florida; Zack Proctor, a transfer from East Rowan, and freshman Cameron Burleyson.

“We’ll take a look at all three and hopefully one of them will do so well that he takes the job,” said Cauble, a former catcher. “That’s a critical spot. It doesn’t matter how good your pitchers are if you don’t have good catching.”

The infield is more settled. Street played third base last year when Hales pitched, so he’s got experience there. Burns is set at shortstop and will make some eye-popping plays with his quickness and strong arm. Misenheimer played a lot a second base last season, and don’t be surprised to see Cameron “CP” Pyle move from the outfield to the infield when Misenheimer pitches. Rogers figures to start at first base when he doesn’t pitch. When Rogers is on the mound, Jake Harris is the most likely replacement. Harris is also a DH candidate.

“That’s a bat we need in the lineup,” Cauble said.

Carson won’t be able to replace Barringer’s prodigious power in the outfield, but Cauble expects the Cougars to be faster in the outfield than last year. The most likely defensive alignment is Davis, who transferred from East Rowan, in left; Pyle in center, and Dylan Driver in right field. Pyle and Driver are returning regulars. Driver is bigger than he was last year and is hitting with more power. Davis has a lot of potential as a lead-off batter and stole three bases in Carson’s second game.

Caden Hudson is another solid outfielder with a good bat and he’s a potential third baseman when Street pitches.

TJ Jones is another outfielder who can run.

Aaron Bradshaw could get some at-bats. His best defensive position is right field, but his strength is hitting.

Also on the varsity are second basemen Cole Hopkins and Cameron Kennerly. Drinkard and Ethan Wilhelm can play first base. Samuel Safrit is a young pitcher who might see action for the jayvees and the varsity.

Carson doesn’t have any obvious superstars heading into this season but not many people thought Hales and Wike would be amazing when the 2019 season got under way, and we know how that turned out. Between them, they won 20 games.

Burns was good last season, but could take the next step up. He’s capable of .375 with some pop.

Pyle will be another key. The Cougars need to get him back on track at the plate.

“He was fantastic offensively as a freshman and he was fantastic defensively last year but had some struggles at the plate,” Cauble said. “We’re looking for him to put it all together.”

If everything falls into place, if Rogers and Street are this year’s 1-2 mound punch , the Cougars will contend for the NPC title again. They’ve won the last two.

“Championships are always a goal,” Cauble said. “The goal is to get back to where we were last year.”