Do you want to hear the latest ‘Rumors’? 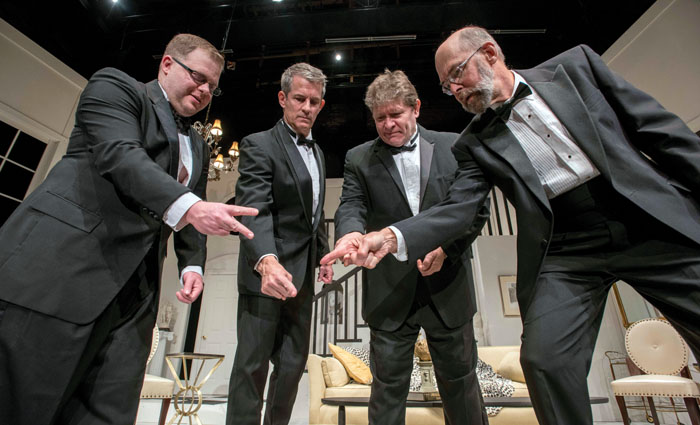 Rumor has it that “Rumors,” the latest Piedmont Players production at the Meroney Theatre, will leave you puzzled, then tickled, then surprised.

This classic Neil Simon comedy is about a group of ridiculously rich people behaving ridiculously. The comedy is a farce, which means crazy things happen that are convoluted and unbelievable, and there are usually a lot of doors.

Director and designer Reid Leonard provided the doors and collected a cast that has to lie, invent, twist and control the craziest of circumstances.

First, you find out someone has been shot, and two other people, Chris and Ken, have arrived on scene just in time to figure out what’s going on — sort of.

Abigail Skibsted — Chris —  is cute in her bright red dress, and a little ditzy — which is practically a requirement in a comedy, as she makes things up, tries to figure things out, compounds lie upon lie and finally turns to the bottle as her only means of coping.

Matthew Spry is a very loud Ken, and you’ll learn why later in the play. He sputters and blusters and shouts and runs up and down stairs.

They are at Charles and Myra’s house to celebrate the couple’s 10th anniversary, only, there’s no Myra, and Charles remains, um, indisposed the entire night.

Other couples are expected, and Ken and Chris try to figure out what to tell them, and what to tell the doctor when they call. It’s a delicate situation, because Charles is deputy mayor of New York City, and he can’t be involved in any scandal.

Neither can Ken or Chris — they are both lawyers.

Then Lenny and Claire arrive and Claire is as catty as can be. Her philosophy is, if you can’t say anything nice about someone, come sit by me. Lenny, Charles’ accountant, is large and loud and, it turns out, an inventive liar. Eliza Smith is oh-so-witchy as Claire, and Brian Rassler is obnoxious and overbearing as Lenny.

Next to arrive are Cookie and Ernie, played by Cindy Phillips and Marty Walker. Ernie is Charles’ analyst, and actually schedules a group session by conference call while he’s at his friend’s house. Cookie, much to the disapproval of the expensively dressed Clair and Chris, is wearing a 60-year-old Russian dress that belonged to her grandmother. Cookie has a cooking show. No, really.

The guests notice pretty quickly that the servants are gone. Food is sitting in the kitchen, ready to be cooked, but untouched. Something odd is going on in this house.

Late to the party are Glenn and Cassie, played by John Rendleman and Summer Perry. Rendleman is a bit slimy, but he is running for state senate. Cassie is nuts. She carries a quartz crystal around and massages it, caresses it, and must regularly wash it. Through the crystal, she has determined her husband is having an affair.

You may remember writer Sir Walter Scott’s famous line, “Oh, what a tangled web we weave when first we practice to deceive.” Uh hunh. That’s the entire premise of this play.

So hilarity ensues as the cover-up stories get more and more elaborate and each couple tries to figure out what the other couple knows. Truth? Fuzzy at best.

The first act dragged a bit on Patron’s Night, as if the cast was just getting warmed up. It’s important to listen closely or you won’t be able to keep up.

The second act was livelier, both in performance and action, with a laugh-out-loud ending.

With a 20 minute intermission, the play ran a little over two hours. It does contain profanity as these frustrated couples try to work out their problems, while only making them worse. But it’s a funny play overall.