High school baseball: East has a slugger and plenty of pitching 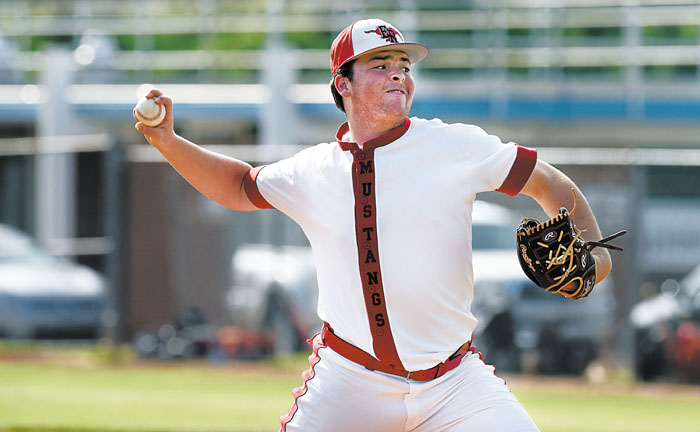 Wayne Hinshaw file photo/for the Salisbury Post ... East Rowan pitcher Jake Hunter, shown during a game last year, against West Rowan. Hunter returns as the ace on the mound for the Mustangs this season.

That’s a major difference from 2019 when Mize started the season on the shelf with an injury following an outfield collision. When he got back in the lineup, he did OK — .329, three homers, 20 RBIs — but anyone who has seen Mize swing the bat during the summer months in American Legion ball knows that he’s capable of a whole lot more.

This could be Mize’s year to batter baseballs and to wreck records.

This won’t be a rebuilding year for East Rowan, but it will be a transition year.  Hatley, who was a star for West Rowan, Catawba  College and Rowan County American Legion, is the new head coach. He follows Brian Hightower, who had 287 wins (and 132 losses) in 15 seasons. The occasionally turbulent, always eventful Hightower era ended last spring.

East has enjoyed solid, contending teams for a very long time, but the Mustangs’ last regular-season league championship was in 2014. East’s last truly great team was the state championship crew of 2010. In recent seasons, it’s been West Rowan and Carson that have been taking home the trophies. East has been conference runner-up three of the last four seasons. That’s been frustrating because baseball is East’s sport.

This will be another strong East team. Potentially, it’s a great one. East not only has Mize in the middle of its lineup, it has catcher Charlie Klingler, a perennial all-county player, at the top. There’s also a pitching staff that appears to be the county’s deepest and most talented. East’s No. 3 would be the No. 1 a whole lot of places.

Jake Hunter was having a surprisingly good basketball season for 14 games when he went down with a stress fracture. He was in a boot for about a month, so he’s a little behind as this baseball season gets under way. But no one expects him to stay behind long. Hunter, who is committed to East Carolina, had a fabulous sophomore season on the mound. He was 6-1, including a no-hitter in the playoffs. He fanned 102 and posted an ERA of 0.32.

The next two hurlers, steady junior JD Basinger and tall sophomore Cameron Padgett, will be No. 2 and No. 3, in some order.

Basinger has proven himself and won three times last season. Padgett ‘s mound time was limited by an injury in 2019, but he’s a major talent with a lot of upside. He’ll be a workhorse this year and the next two.

On opening day against Cox Mill, Basinger and Padgett shared the load and combined for 10 strikeouts.

“Mako’s ceiling is the roof,” Hatley said. “Hopefully, we’ll be able to give everyone some chances early. We’ve got a lot of three-game weeks. We’ll get the pitching roles sorted out.”

Except for Mize, who probably will man center field, the lineup isn’t nearly as scary as the pitching, but Klingler will get things started. He’s a .300 hitter who gets on base . He usually scores once he gets there.

Griffin Warden is only a sophomore, but he can swing the bat and will be an outfield starter in one of the corners. He was in right field in the opener.

Henderson will be in the lineup, either at shortstop or in the outfield.

Mako will get a chance to be the starting first baseman. White figures to handle third base. Austin Fulk is the probable starter at second base, with Bryson Shive also competing for that spot.

Most of East’s pitchers are good athletes who can swing the bat and handle a position in the field. That versatility is essential on a 15-man roster. Padgett is a capable shortstop, while Basinger can play the outfield. Hunter has some power and could be used at first base or DH.

East also will get help from young catchers Morgan Padgett and Tristan Miller.

“I like this team a lot, really like the energy,” Hatley said. “These guys have been on the grind for a while. They’ve worked about as hard as you can possibly work in the off-season, and now they’re excited about getting started.”