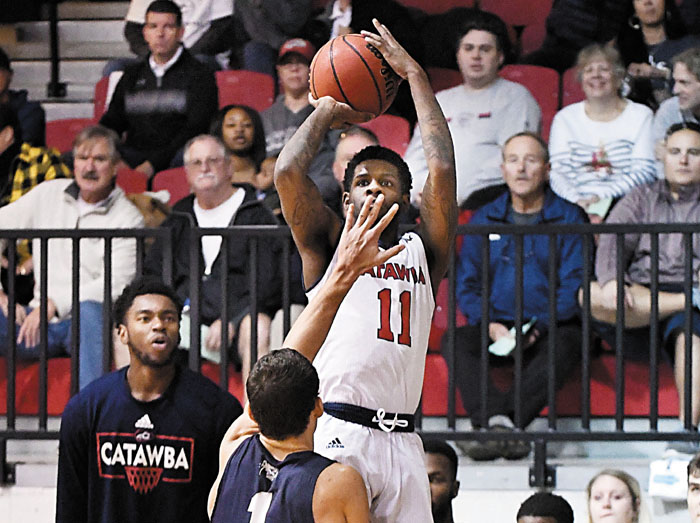 Wayne Hinshaw file photo/for the Salisbury Post ... Catawba’s Marcell Haskett (11), shown during an earlier game this season, scored 38 points on Wednesday night at Goodman Gym, leading the Indians past Newberry, 89-87, in a first-round game of the South Atlantic Conference Tournament.

SALISBURY — We haven’t heard Marcell Haskett’s name in a while, but it appears he shouldn’t be forgotten.

The Catawba senior turned his last waltz around Goodman Gym into a spotlight dance Wednesday night, when he single-handedly lifted the Indians to an 89-87 win over Newberry in the first round of the South Atlantic Conference Tournament.

“You can’t enjoy this too much,” Haskett smiled, moments after pouring in a career-best 38 points — including a decisive, scoop-and-score layup with 1.1 seconds to play. “Now we get to practice the next couple of days and try to win another basketball game.”

Third-seeded Catawba (20-9), which captured the conference tournament a year ago, faces a stiff challenge from second-seeded Queens in Saturday’s 7:30 p.m. semifinal at Furman University in Greenville, S.C. The Indians have never beaten Queens in SAC play.

“People say it’s a rivalry game, but I don’t see it that way,” senior Malik Constantine said. “They’ve smacked us around the last few years. I think they’ve beaten us 15 or 16 times in a row. That’s not a rivalry.”

For certain, Catawba will have to choke up and shorten its swing. It reached the semis by shooting 56.1 percent from the field (37-for-66) and draining nine 3-pointers. No one’s performance was more illuminating that Haskett’s. The best-of-breed shooting guard hit 14-of-20 field goal attempts and threaded six-of-11 threes.

“He was good from beginning to end,” gushed sixth-year Catawba coach Rob Perron. “I call him a one-man run because he can really take over a game. When he gets his fade-away going, he’s got a full gamut of shots. And when he gets going, he’s hard to stop. Even though he’s a smaller guy, when he gets some space he can make shots.”

That didn’t surprise Newberry coach Jason Taylor. “(Haskett) has done that against lots of people,” he said. “He’s a talented player on a talented team.”

Haskett had 17 points at halftime as Catawba forged a 44-36 lead. Then he seemingly donned tights and a cape as the second half unspooled, threading three consecutive 3-pointers and scoring 13 points in the first 3:40.

Catawba led by as much at 59-46 when Haskett canned a bomb from the left side with 16:20 to play. Newberry (14-15), which split a pair of overtime decisions with the Indians this winter, launched the first of several rousing comebacks over the next few minutes. Three-pointers by Sikander Nielsen and T.J. Brown trimmed the Wolves’ deficit to 63-39 and teammate QuanDaveon McCollum’s power-drive layup from the left block made it a two-point game with 11:53 on the clock.

“Basketball is still a game of runs,” Constantine reminded, after contributing 15 points and five rebounds. “All you need to do is see one shot go in and you believe. Newberry’s got some really good players who know how to win tight games.”

Catawba regrouped and went ahead, 85-74, when Ben Zemonek’s layup capped an 8-2 spurt with 3:04 to go. Included in the rally were Haskett’s fadeaway from the left baseline and a major-league dunk by teammate Terrence Whitfield. But again Newberry charged back, using an 11-0 run that included three baskets from downtown to knotted the score, 85-85.

The waning seconds provided a frantic, teeth-grinding finish. Constantine broke the tie when he drove the lane against 6-foot-5 Angelo Sales and scored on a left-handed hook shot with 20 seconds to play. “He was right on me and playing with four fouls,” Constantine said. “I just wanted to see if he could stop me.”

Ten seconds later the score was tied for fifth time, courtesy of Luke Gibson’s short jumper from inside the paint. Following a pair of timeouts — one charged to each team — the stage was set for Haskett’s game-winning heroics. With his back to the basket near the right baseline, he spiraled to his left and scored the game’s final points on a well-contested layup.

“I thought he did a good job of changing pace,” said Perron. “When he lifted up, he kind of changed his height and his pace. That gave him just enough room to make the shot.”

Now the Indians turn their attention to formidable Queens and Saturday’s semifinal.

“We won this last year — and it’s always right there in your mind,” said Haskett. “But if you’re not trying to win a championship, why even play college basketball?”

NOTES: Queens (23-6) advanced with a 106-96 first-round victory against Lenoir-Rhyne. The Royals have won nine straight games, including a pair of 10-point wins over Catawba. The final is scheduled for 4 p.m. Sunday at Timmons Arena. … Constantine shot 6-for-10 from the field and scored his 1,000th career point on a putback with 12:42 remaining in the first half. He now has 1,009 points. … The win was Perron’s 100th as Catawba’s head coach. … Newberry was paced by Gibson, an Albemarle product who shot 10-for-16 and scored 23 points. The Wolves shot 48.6 percent from the floor (35-for-72) and placed four scorers in double figures. McCollum led all rebounders with 10.