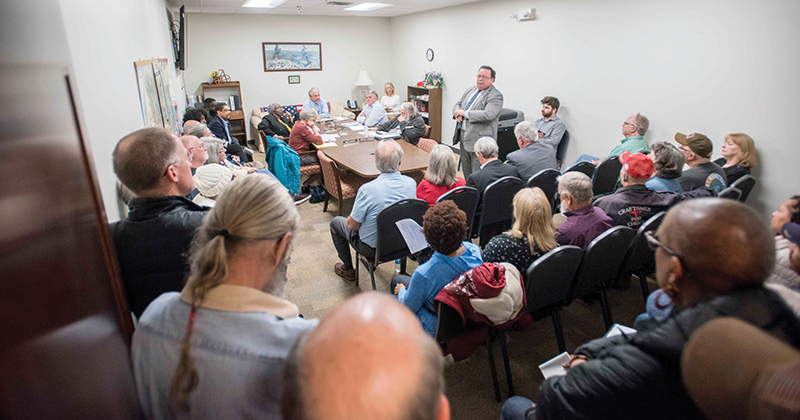 Salisbury Post file photo - The small room was packed during a meeting in March. The members of the Rowan County Board of Elections held a public meeting at the end of the Primary Election day to address early voting and proposed expanding to include Sunday voting. Salisbury,North Carolina,3/3/20.

SALISBURY – People lined up out the door and into the lobby at the Rowan County Board of Elections on Tuesday night to attend a meeting of the board called to discuss the fate of Sunday voting.

And after passionate public comments, two tie votes and some debate, the board moved forward with a proposal to request funding from Rowan County commissioners that would include early voting on two Sundays, with four hours of voting on each.

The public comment period at the beginning of the meeting featured a long line of speakers, both for and against adding some Sundays to the county’s early one-stop voting.

Supporters emphasized the impact the change could have for African-American voter turnout, that voting should be as convenient as possible and the question of “why not?” Detractors claimed the addition would be unnecessary and that it would cost additional tax dollars. Detractors also made biblical references to not performing work on Sunday.

One man who spoke against the measure said he is disabled and still makes sure he got to the polling site to vote. Another said he would rather see elected officials work on giving people an hour off of work to vote during the workday. One speaker in favor of adding Sundays to the schedule said it is a humans right issue. A second said, “We want to do things that are not done as they were yesterday, they’re done better.”

Among the speakers was United Auto Workers Local 3520 President Corey Hill, who said he supported Sunday voting “for many reasons.”

“I sat and I listened to people’s religious beliefs. I have a very strong religious belief. I attend church on Sundays. I hear people say its not necessary to have polls open, because it’s just not necessary because we have absentee votes, but I also look at people’s rights,” Hill said. “It’s not necessary? I remember before 1963, we didn’t think it was necessary for African Americans to vote either, and when we talk about the church place, that’s where they gathered to pray and ask for the opportunity for a redeemer to hear them and answer their prayers to have the opportunity to go and cast a vote in this country, on Sunday.”

His comments ended with cheers from attendees.

After the public comment period, elections board member George Benson, a Democratic appointee, made a motion present a department budget requesting funding for voting expenditures that would include early voting on two Sundays, with four hours of voting each.

The motion passed only after chair John Hudson broke a tie. Before that, however, member Dwight “Dave” Collins, a Republican appointee, made a second motion to table the first for a later meeting. Member Mary Blanton, a Republican appointee, said the board could not make a reasoned decision until it knew what commissioners were doing with regard to funding, but the county is required to fund elections.

Rev. Roy Dennis, a retired Army Captain, spoke in support of Sunday voting at the beginning of the meeting and took issue with the order of the votes on the motions, noting that the board didn’t vote on the first motion before taking up the second.

Dennis said people have the right to oppose Sunday voting, but it should be done decently and in order.

“If they don’t want to do it and they’ve got the vote, fine,” Dennis said. “I don’t like it, but that’s what it is so you’ve got to accept that, but conduct it in order.”