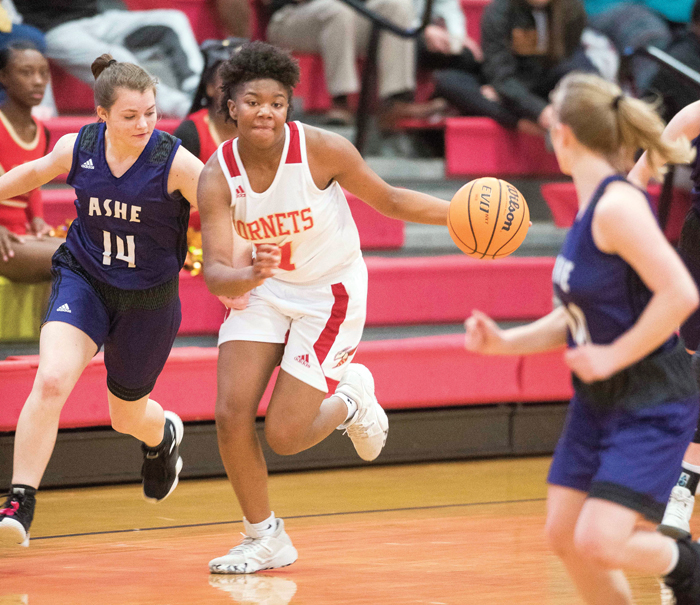 SALISBURY — Last year, Salisbury’s girls basketball season was a good one — 25-5 — but it ended badly.

Forbush exploded in the third quarter and beat the Hornets, 55-41, in the SHS gym in the fourth round. It was a loss that ended the career of Salisbury standout Bryanna Troutman. Troutman, now a freshman at Wingate, scored 18 of Salisbury’s 41.

Tonight, Forbush returns to Salisbury. The fourth-seeded Falcons (28-2) from East Bend and the top-seeded Hornets (28-1) again will meet in the fourth round. Tip-off is set for 6:30 p.m.

The winner advances to play Newton-Conover in the 2A West regional final in Hickory on Saturday. Third-seeded Newton-Conover went on the road and knocked out second-seeded East Burke, 58-55, on Tuesday.

The regional games in Hickory will be played at Lenoir-Rhyne University and Catawba Valley Community College. Times and specific sites have not yet been determined.

Returning starters for Salisbury from last year’s clash with Forbush include senior Anayia Fulson, who scored 13 in that game, and sophomores Rachel McCullough and Jaleiah Gibson, who combined for seven points. Coach Lakai Brice’s Hornets have been bolstered by the addition of freshmen Kyla Bryant, Jamecia Huntley and Mary Morgan, and have put together one of the better seasons in school history.

Forbush lost, 70-45, to eventual state champ Mountain Heritage in last season’s regional final, but Forbush has avenged that loss this season. Playing at home, Forbush wiped out Mountain Heritage, 68-50, in the third round.

This season, Forbush has lost only to undefeated 3A powerhouse Freedom in Freedom’s Christmas tournament and to 4A Glenn (24-2) in a season-opening tourney in Winston-Salem.

Forbush basically has the same team that coach Bradley Shore brought to Salisbury last season. Parkley Hennings, Nicole Scott and Hope Grimes combined for 49 of Forbush’s 55 points against the Hornets last time, and they’re all still around for the rematch.

Hennings is a talented 5-foot-11 forward who has chosen to play college volleyball at Lenoir-Rhyne. She was conference player of the year and conference tournament MVP and is the leading scorer in the history of Forbush’s program.

Scott is a very quick guard who is the all-time assists leader at Forbush, while Grimes is a very good shooter. Scott and Grimes both have signed with Catawba, and each is a 1,000-point scorer.

In its big revenge victory against Mountain Heritage, Forbush got double-figure scoring from Hennings, Scott and Grimes and sophomore Kyndall Ellison.

Like Forbush, Salisbury hasn’t lost to a 2A team this season. The Hornets’ only setback came in a Christmas tournament semifinal against 3A West Rowan.

Salisbury has won 20 in a row.  So has Forbush. Neither team has lost since the calendar flipped to 2020.