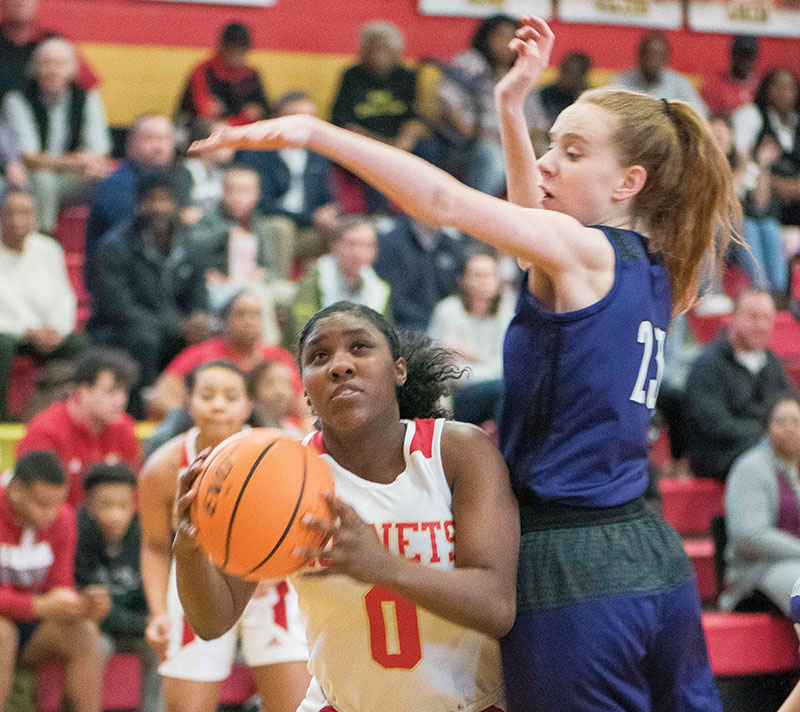 SALISBURY — Ashe County’s girls had two 6-footers, but Salisbury got every rebound.

Physically strong from sweaty hours in the weight room, the Hornets overpowered Ashe County and romped 52-24 in Monday’s third-round 2A playoff game.

It wasn’t even as  close as it sounds. Ashe, which was shut out in the third quarter, closed the game with a 5-0 min-run against Salisbury reserves.

“Coach talked about how we had to rebound tonight — everybody had to rebound because they were taller than us,” Salisbury sophomore Jaleiah Gibson said. “But games like this are why we spent the summer in the weight room. We went out there to get rebounds, and this is a team. We started feeding off each other.”

The hungriest Hornet was Gibson. She’s Salisbury fifth scorer, but she had eight points in the first quarter by running the floor and assaulting the glass. She scattered the thinner bodies wearing purple uniforms like pins in a bowling alley.

“This was probably the best game she’s ever played,” Salisbury head coach Lakai Brice said. “Jaleiah didn’t just do a great job of getting rebounds. She was attacking, putting them back.”

Top-seeded Salisbury (28-1) won its 20th game in a row. Eighth-seeded Ashe County closed the books at 21-7.  Salisbury will take on No. 4 seed Forbush (28-2) in the SHS gym on Wednesday (time TBA). Forbush beat a Bryanna Troutman-led Hornets team in the fourth round last season to advance to the regional final. Forbush girls made the journey from Yadkin County to scout the Hornets last night.

Ashe County made the trip down the mountains from West Jefferson by activity bus. That’s not easy and it probably was a factor in Salisbury’s quick start.

Ashe played a tight zone early, but Salisbury shot the Huskies out of it. Rachel McCullough got free and drilled a 3-pointer for a 9-2 lead. Kyla Bryant made a 3 for 14-5, and McCullough swished another long one for 17-8. When Bryant went wheeling in for a reverse layup to close the first quarter, the Hornets led 23-8, and Ashe was on the ropes.

Ashe’s leading scorer Hallie Treva, a guard headed to Tusculum, was silent in the first quarter.

“She was running me all over the place off screens,” Salisbury senior guard Anayia Fulson said. “I was getting tired, but I was determined to hold her below the number of points she usually scores. That was the goal.”

Treva, a 1,000-point scorer, usually gets 15 to 20, but she would score only five, including a 3-pointer in the fourth quarter. She left the floor in the final minutes and received an ovation from Ashe fans.

“Anayia did a great job of limiting their best player’s touches,” Brice said. “She also did a good job of attacking her on our offensive end and getting her in some foul trouble.”

When Ashe County tried man-to-man defense in the second quarter, Fulson proved a tough matchup and got to the hoop for three buckets. She had a beautiful floater to end the first half for a 35-16 lead. Salisbury was efficient on those final possessions of quarters.

“We’ve worked hard on our offensive execution,” Brice said. “Everyone was patient.”

The third quarter was a defensive clinic by the Hornets. Ashe came in averaging 50-plus points per game, but couldn’t scratch for eight minutes.

Brice was thrilled with that third quarter. The Hornets were able to play aggressive defense without fouling much. That was one of the Hornets’ objectives — to keep Ashe off the foul line.

“They use a lot of ball screens, but we were talking and helping each other out,” Gibson said.

Salisbury outscored Ashe 15-0 in the third quarter, with a spinning Jamecia Huntley bucket off a sweet pass by Bryant and a surprisingly forceful McCullough three-point play providing the highlights.

It was 50-16 heading to the fourth, although the visitors did manage to avoid a 40-point deficit and a running clock.

Kenadie Hudler, a small guard, led Ashe with six points. The 6-foot Jones girls were held to four points apiece. It was never a picnic for Ashe to score.

“We kept up the defensive intensity the whole game,” McCullough said.

Forbush is going to be tough for the Hornets. The Falcons were juniors last season. They still have the same cast of characters — coach Bradley Shore, Parkley Hennings, Hope Grimes and Nicole Scott — that beat the Hornets 55-41 a year ago.

But Salisbury is so young that it’s still getting better, even at this point in the season. Monday’s game was about as well as the Hornets have played. They couldn’t have been much better on offense in the first half or on defense in the second half.

Fulson, who scored 18 points, did a little of everything. McCullough was making shots. Bryant was handling the ball smoothly, hitting cutters and making good decisions. Gibson and Huntley brought unlimited energy. The bench didn’t provide points, but it offered quality minutes and rest for the starters.

“We like where we are,” Fulson said. “Our defense is where we want it to be.”