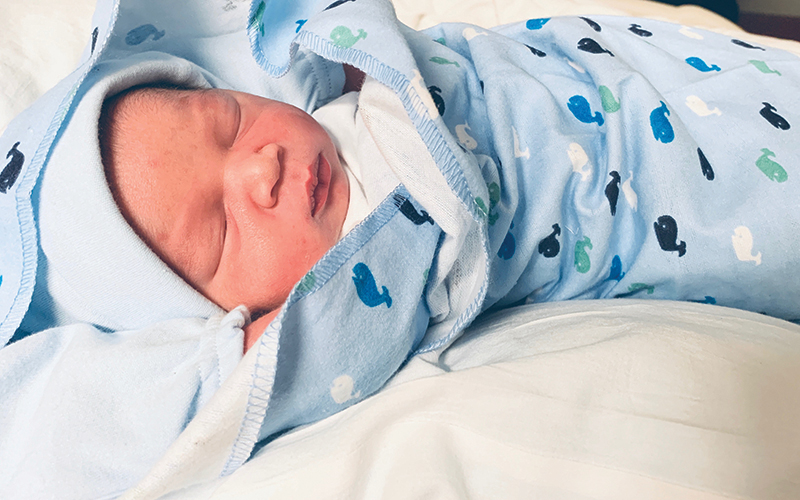 And to celebrate his special day, Suber said they received flowers from a local flower shop and donuts from Krispy Kreme.

Mason was expected to be born on March 30, but he was born five weeks early and, notably, on a day that only comes every four years — Feb. 29.

Suber said her pregnancy didn’t have any complications. Her newborn son weighed 6 pounds and 7 ounces. He measured 18.5 inches long at his time of birth.

While his first name honors his grandfather, Mason Reddick, who lives in Virginia, his middle name pays tribute to his father’s’ favorite professional basketball player, Kobe Bryant, who died of a helicopter crash in January. Suber, however, is a Lebron James fan who couldn’t “see myself calling my son, ‘Kobe,'” despite her husband’s push for a long time.

Her husband won on that one.

Mason has three older siblings — 15-year-old Xavier, 6-year-old Gavin and 1-year-old Yasmin. Only Xavier has been able to meet Mason because of concerns about children under the age of 13 being near infants due to the rising concern of the coronavirus. But Suber said Xavier met his baby brother “with a smile on his face.”

Mason is not Suber’s first premature baby, as Yasmin was born a month early last year, she said.

Mason’s grandmother, Doretha Reddick, said she is “grateful he can carry on the Reddick name” as he is her first grandson with their last name.

Suber added that the staff at Novant Health was “amazing,” and Mason was the only Leap Year baby that nurses were aware of.

Suber wants to celebrate Mason’s birthday every year on both Feb. 28 and March 1; Mason’s nana, Doretha, agrees. But Marcus jokingly said Mason will be “the oldest toddler” at every party because he’ll only get a birthday once every four years.

Blotter: Man charged with more than 20 counts of…