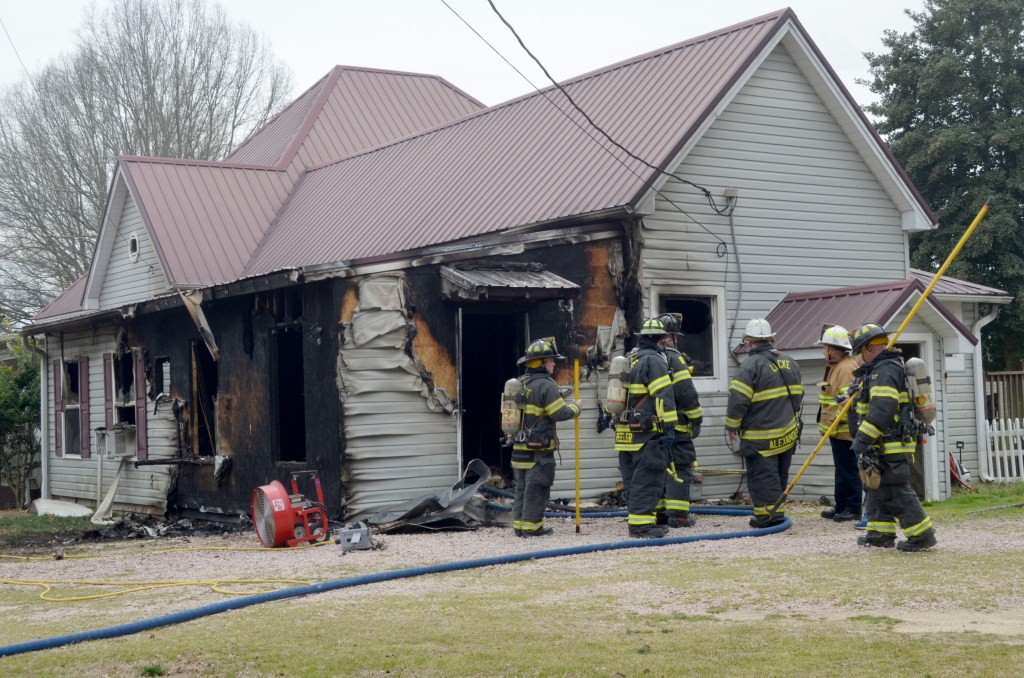 Firefighters responded Monday morning to this house fire at 502 S. Zion St. where two pet dogs perished. The homeowners were not home at the time. Landis Fire Chief Ron Miller said the fire was contained to this back area that is believed to be the living room. The Red Cross is assisting the couple who were displaced. Shavonne Potts/Salisbury Post

LANDIS — A Landis couple was displaced from their home following a Monday morning fire at their South Zion Street home. The couple’s two dogs, a boxer and chihuahua died in the fire, said Landis Fire Chief Ron Miller.

The fire was reported shortly after 11:30 a.m. at 502 S. Zion St., located on the corner of West Hoke Street. The homeowners were not there, but Landis firefighters who were in the area spotted smoke.

The fire was extinguished quickly. The fire was mostly confined to the back area of the home in what is believed to be a back living room off the kitchen, Miller said.

“We are devastated for this family,” said neighbor and Landis Mayor Meredith Smith.

A boxer named Minnie and chihuahua named Cooper were found still inside the home a few hours later. Firefighters remained at the home, putting out hot spots and searching for the family’s dogs.

The 42 rescue personnel representing the following agencies responded to the fire: Landis, Kannapolis, China Grove, Mount Mitchell, Bostian Heights, Locke, South Salisbury and Enochville fire departments as well as Rowan EMS, Rowan Rescue, the American Red Cross and the Rowan Fire Service Division. The county fire marshal’s office will continue the investigation as to the cause of the fire.