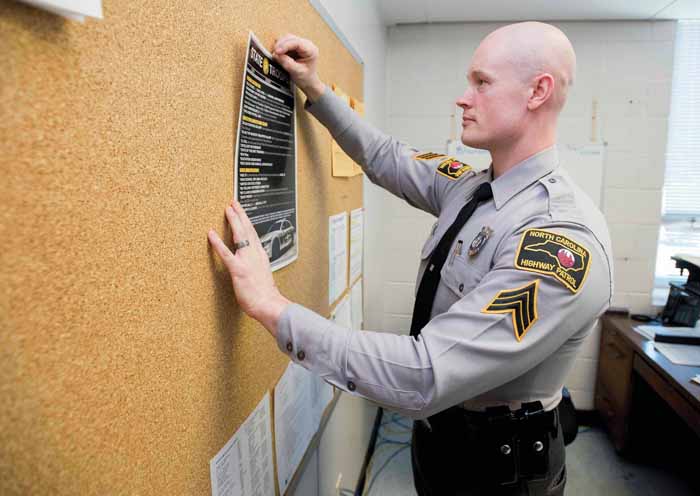 JON C. LAKEY/SALISBURY POST NCSHP Sgt. David Morgan finds a empty spot to hang a recruitment poster. The Rowan County office of the North Carolina Highway Patrol is continuously looking for Troopers to fill in the ranks. Rowan County is not unique in the search for recruits. Salisbury,North Carolina,2/27/20.

SALISBURY — There are 1,6oo troopers who cover nearly 80,000 miles of North Carolina highways, but that number isn’t enough.

Currently, the North Carolina State Highway Patrol has 200 available positions for troopers statewide. Each county in the state has an allotment of troopers. And although there is a need for 20 troopers in Rowan County, the allotment is 17, said Highway Patrol 1st Sgt. Garrett Barger. Currently, there are five vacant positions in Rowan County. Including in those vacancies, two are current officers on administrative leave and one is serving in the military, leaving 12 troopers covering all of Rowan County.

“I can’t tell you the last time we had 17 troopers in this district. As far back as I can remember, it hasn’t ever been full,” Barger said. “As of right now, the goal is to have all of your allotments full.”

Each county falls within one of eight troops — A through H. and Rowan County is included in Troop E along with Stokes, Stanly, Forsyth, Yadkin, Davie, Davidson, Cabarrus, Surry and Montgomery counties.

“The only way we can fill those spots is through getting people through patrol school. The problem now is we can’t catch up because we have people leaving so fast through retirement or resigning or getting fired. We can’t catch up to where we need to be,” Barger said.

The reality is the state needs more troopers. And the law enforcement market is competitive, with agencies upping their salaries and benefits packages to make themselves stand out among the rest.

“Everybody wants to give you just a little bit more,” Barger said.

The troopers of 20 years ago thought about their career in the long term, whereas today’s generation is asking “what can you do for me today,” Barger said. He said the newest recruits want to know who offers the most money and who has the “coolest gadgets.”

On Aug. 8, 2019, Gov. Roy Cooper signed House Bill 226 into law, which mandated salary increases for state employees. In that, the Highway Patrol received a 2.5% salary increase.

He said some potential employees don’t look at benefits, but Caroll noted the highway patrol has great long-term benefits. On average, full retirement is 103% of salary. So, troopers can retire essentially making the same or a better salary, Barger said.

“We have a great retirement. I think our retirement is a big plus,” Carroll said.

Carroll has been a recruiter for five years and he’s seen other counties experience similar vacancies within the State Highway Patrol.

“There is a lot of people retiring and this is a difficult job. There’s a lot of responsibility and liability,” Carroll said.

The Highway Patrol attributes shortages to lower pay and high risks. But they say another reason for vacancies is pervasive dissatisfaction with law enforcement, which has made it a career that is less appealing to some.

Since there are a limited number of troopers working each shift, Barger, like many other supervisors throughout the state, looks closely at the statistics. Because of limited manpower, he studies the high traffic days and times so that he can adequately staff each shift.

“There’s a balance there to providing the needs of the citizens and time for the guys. I try to keep it where they can have every other weekend off,” Barger said.

Then, there are usually four people working. Also, there is typically a greater number of driving-while-impaired incidents on Friday and Saturday, which means more troopers on the roadway.

Since there are shortages, troopers work either eight or 10-hour shifts to equal 40 hours per week.

The application process is extensive, Carroll said, including a background check, a physical fitness test and psychological evaluation.

“We want people that don’t just talk a good talk but that walk the walk,” Carroll said.

The agency is looking for people who represent its core values — loyalty, integrity and professionalism.

Carroll said he has reached out to the National Guard, whose members can work full-time with the highway patrol and maintain their part-time status with the Guard. He has periodic recruiting events at college and job fairs as well as speaking with potential law enforcement candidates who are in the midst of basic law enforcement training.

“We’re allowed to come in and talk to those students. A lot of people I get are word of mouth,” Carroll said.

Each troop has placed recruitment flyers within its communities that list salary and benefits and basic qualifications.

“We’re just trying to get the word out,” Carroll said.

Currently, there are two options for patrol school: fast track, those who already have law enforcement experience, and longer-term school.

The longer-term school has gone from 29 weeks to 27 weeks; the short school is from 15 to 12 weeks. Potential troopers stay overnight while in school and return home on the weekends. Throughout trooper school, candidates are paid $37,323 and, upon graduation, can receive a starting pay of $46,228 with the top trooper making $67,453 after six years due to a 6.5% raise every 12 months.

Also, the G.I. Bill can be used during patrol school and or up to three years after graduation.

Candidates must be 21 by the first day of patrol school but no older than 39.

There’s a lot more freedom with being a trooper, said Sgt. David Morgan. When a trooper begins his or her day, they can check-in from home to start. There’s no roll call and, instead of driving a personal vehicle to the station, they are assigned patrol vehicles that they can take home.

“Our pay has come up and is way more competitive than we were. So now we are kind of running neck and neck with some of these other lead agencies,” Morgan said.

Barger said one of the best ways to recruit potential candidates is to let them see a trooper exemplifying the core values.

“Some people can be a little standoffish about law enforcement. We have to get back in front of people. I try to be what I’d want people to see,” Barger said.

For more about the State Highway Patrol visit ncdps.gov.