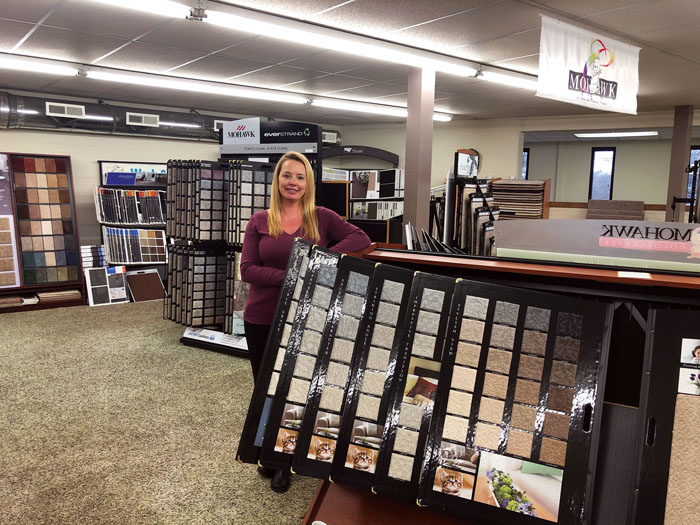 LEXINGTON — From Lexington to Beverly Hills to Phoenix to Charleston, local business owner JoAnn Kelly has made her mark in several states across the country.

And now the 45-year-old is back in Lexington with her 12-year-old daughter, Teagan, running a company that’s been in business for nearly 40 years.

In early February, Kelly bought Creative Carpets Discount Sales, Inc., located at 600 MLK Jr. Blvd in Lexington, from Frank and Debbie Polston, who she has known for three decades.

And with her more than 20 years of experience working with business leaders and contractors, Kelly said she now gets to do it all for herself.

“It was an opportunity because I had to run so many different companies. I worked directly with owners and presidents for the last 22 years. I made them a lot of money,” Kelly said. “Now, I figured since I’m in my 40s, this business opportunity came along. And I knew the business.”

Kelly started her career at Catawba College, where she graduated with a bachelor’s degree in communications in 1996. After a year-long stint in Wilmington and then 11 years in Beverly Hills, Kelly got another degree in accounting from University of California, Los Angeles, before earning her master’s in business administration degree from University of Phoenix.

Before purchasing Creative Carpets, Kelly worked as a corporate controller for The Boss Designs in High Point. The local furniture company, formerly known as Jack Cartwright Inc., was purchased by a United Kingdom firm in 2015 to serve as the U.S. headquarters. There, she said the environment was “male-oriented,” and she didn’t feel appreciated despite being asked to do more.

That prompted her purchase of Creative Carpets, where now she gets to “do the same thing I’ve been doing for decades, but now for myself.”

She bought the stock outright to maintain the longevity of the 40-year-old business. She intends to maintain the same reputation while using her communication skills to establish an online and social media presence. Both the Polstons, she said, have been present to help her with the transition.

Kelly said she always likes to bring her story back to Catawba College and its “family environment.” With teary-eyes, she credited her former professor Dr. Karl Hales as her inspiration. Hales founded the communications department at Catawba and taught it for almost 40 years before retiring in 2005.