Fleetwood the leader going into final round of Honda Classic 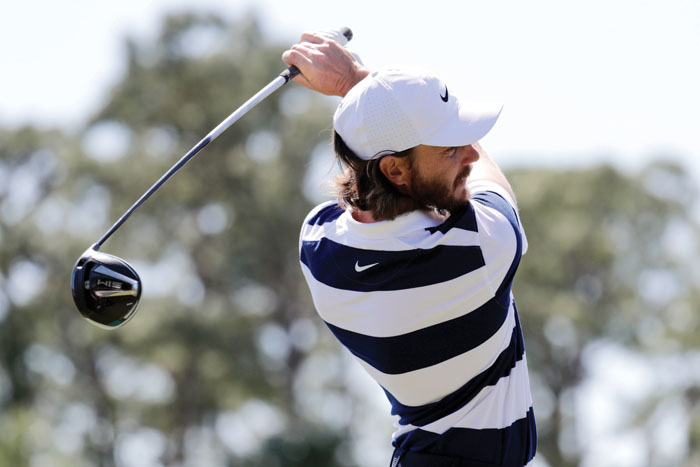 Tommy Fleetwood of England hits from the second tee during the third round of the Honda Classic golf tournament, Saturday, Feb. 29, 2020, in Palm Beach Gardens, Fla. (AP Photo/Lynne Sladky)

By TIM REYNOLDS AP Sports Writer
PALM BEACH GARDENS, Fla. (AP) — Tommy Fleetwood has won in Scotland, England, the United Arab Emirates, France, South Africa, even Kazakhstan.
Victory in the U.S. hasn’t happened yet.
The Englishman is in position to change that Sunday.
Fleetwood birdied four of his final six holes on the way to a 3-under 67 in the third round of The Honda Classic on Saturday, moving to 5 under for the week and one shot ahead of Brendan Steele at PGA National. Fleetwood, ranked No. 12 in the world, has been close to getting that elusive win on U.S. soil with two runner-up finishes.
“If you’re going to win around here, you’ve proven yourself as an all-around golfer,” Fleetwood said. “Realistically, yeah, it probably is another step in my career. I’m not going to lie and say, ‘Ah, I don’t really mind about winning in America.’ Of course I do. I want to win everywhere I play and the PGA Tour is for sure one of those places where I haven’t done it yet.”
Steele shot 71. He was alone on the lead through 36 holes at 5 under, birdied two of his first three on Saturday to get to 7 under and then made four bogeys in an eight-hole span.
But he survived, which was the order of the day for the leaders.
“It feels like a major championship toughness-wise,” said Daniel Berger, who is three shots back.
Fleetwood rolled in a birdie from nearly 50 feet on the par-3 17th to highlight his big finish. But he thought his two most important shots on Saturday were putts that dropped on the 10th and 15th holes.
And both were for bogey.
Let that speak for how challenging PGA National was — yet again. Of the 69 players who made the cut, only 11 broke par on Saturday. Fleetwood’s 67 was the second-best round of the day; Mackenzie Hughes, who made the cut on the number Friday, shot a 4-under 66 on Saturday and went from tied for 59th to start the day to tied for eighth with 18 holes left.
Fleetwood’s score of 5 under is the highest by any leader through 54 holes since the Honda moved to PGA National.
“It’s just a strong test of your all-around game,” Fleetwood said.
Luke Donald birdied the last to finish a 71 and get to 3 under for the week, two shots off the lead. Lee Westwood (71) was tied with Donald going into the final round, surviving an up-and-down day where he birdied two of his first three holes — and then made just one more in the last 15 holes.
“I didn’t have my A game today,” Westwood said. “But, ground it out and didn’t do too much damage. I don’t feel like two shots is much around this golf course.”
True, but the Honda — at least the current incarnation of it — is not exactly known for comeback victories.
Since the tournament moved to PGA National, 12 of the 13 winners have been either first or second after 54 holes. And in terms of deficits overcome, the biggest has been three shots — Padraig Harrington rallied after being three back of Ian Poulter in 2015, and Ernie Els was three shots behind Donald, Matt Jones and Mark Calcavecchia in 2008 before prevailing.
Berger (69), Charl Schwartzel (70) and Sungjae Im (70) were tied for fifth at 2 under, three back of Fleetwood.
There was a five-way tie for the lead — Schwartzel, Steele, Im, Donald and Fleetwood — on the back side for a brief spell Saturday at 4 under.
It didn’t last long as all five dropped a shot within a span of about 15 minutes, a span in which Schwartzel got a reminder of how fast things can change at PGA National.
He put his tee ball in the bunker on the par-4 16th, then saw his second shot hit the lip of the sand and plummet into the water to set up a double bogey.
“I thought I was really good today out there,” Schwartzel said. “I played well, made a stupid decision on 16, but hit good shots after that and kept going. It’s a tough golf course.”
DIVOTS: If Ryan Palmer (2-under 68 Saturday, even par through three rounds) signs his card and officially finishes Sunday, he’ll become a Honda millionaire. He’s earned $999,167.54 in 13 previous appearances. … Grayson Murray aced the par-3 17th with a pitching wedge, then tossed the ball into a grandstand filled with revelers after pumping his fist probably a couple dozen times. Murray is 1-over for the week, but 4-under on his three trips to 17 and didn’t exactly follow strategy Saturday. “My caddie was telling me to go 15 feet left and I would have taken that any day, but I had other plans,” said Murray, who a 1, three 3s, 12 4s, a 5 and a 7 — thanks to a triple-bogey on the par-4 4th — on his card.