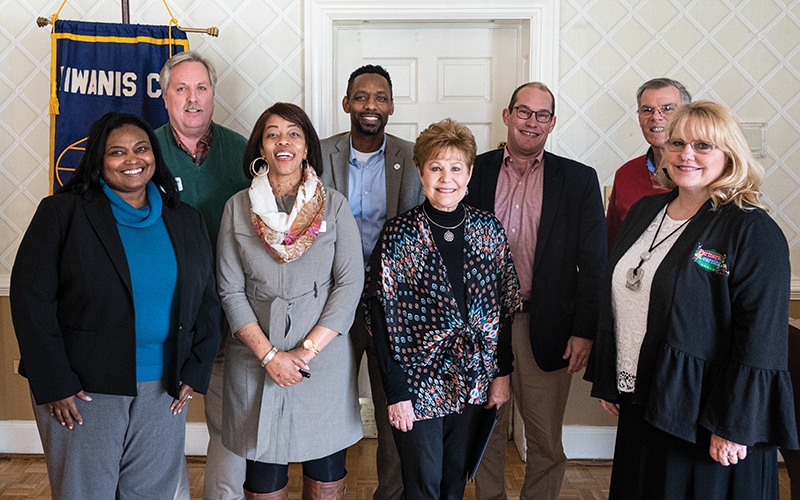 Josh Bergeron / Salisbury Post - The Salisbury Kiwanis Club on Friday honored eight people on Friday with awards as part of its centennial celebration, one of whom was the late Charles Dunlap, who died in January. Pictured here from left is (back row) Kiwanis Club President Glenn Taylor and honorees Nick Means, Jason Walser, Mike Jacobson as well as (front row) April Kuhn, Cassandra Rankin, Francis Simpson and Norma Honeycutt.

Means asked Alisha Byrd-Clark to join him as he spoke about her husband, Alex Clark, who died Saturday at the age of 49. Clark used his life history to mentor young men in the Salisbury area and, with Byrd-Clark, formed two companion nonprofits — COMPASS and Gemstones Academy. As the couple, both before and after their marriage, mentored local boys and girls, they also gave away thousands of dollars in college scholarships.

“She has talked about the importance of pouring into the youth. If you don’t have anyone pouring into you, you’re going to become empty,” Means said as he asked Byrd-Clark to join him at the front of the room. “I want to thank her for helping me become the man that I am today and to honor her husband, brother Alex Clark.”

Means left the audience with a quote: “Whenever you’re dealing with children, be who you needed when you were their age.”

The Salisbury Kiwanis Club, celebrating its 100th anniversary this year, plans to present 100 awards to local folks, dead or alive, who exemplify its mission: a group of volunteers “dedicated to improving the world one child and one community at a time.” Friday represented the second set of awardees.

Means was nominated for the award because of his work with North Rowan High as a football and basketball coach and for his work with Man Up Monday, a program where groups of local men spend time with students who may not otherwise have male role models in their lives.

A nomination form for Means said he “is an excellent example of making a difference” one child at a time.

Others awarded Friday were:

• Mike Jacobson was nominated for his 10 years as a volunteer at Faith Elementary School. He retired from Duke Energy and concentrates his volunteer efforts on lower grades. He eats lunch with students, brings doughnuts and games for their enjoyment and is well-known by the teachers and staff and students at the school. He’s fondly called “Mr. Mike.”

• The late Charles R. “Chuck” Dunlap, who died in January, was nominated for his work in the North Rowan community and for his legacy as the high school’s “Music Man.” From 1958 to 2000, he was North Rowan High School’s first and only band director. The band program grew to one of the largest in the country and performed across the nation, too. A letter to the editor published Feb. 6 in the Salisbury Post (“North Rowan’s Dunlap will be missed in community”) said “he kept many students out of trouble by giving them a purpose and making them work hard through endless practice and discipline.”

• April Kuhn, the chief legal officer for Rowan-Salisbury Schools, was nominated for her career and work in education. She has worked for the school system since 2015 and as a labor and education consultant for the N.C. Association of Educators. She also was managing member of a Mooresville-based law firm from 2013 to 2016. Kuhn’s nomination form said she “is dedicated to the inclusion of all children in our school district. She thinks deeply about the services needed for children of trauma, children who are hungry and children who need extra support to participate.”

• Frances Simpson was nominated, in part, for her hours of volunteer work at Shive Elementary School. She’s logged more than 500 hours per school year as a volunteer at Shive since 2017. She also worked full time in Rowan-Salisbury Schools for 30 years. She’s taught Sunday school for 30 years and helped fundraise for 18 years with the Sweet Potato Queens for Relay for Life and Wallace Cancer Institute. Simpson’s nomination form said she “combines her caring for children with her enthusiastic effervescent personality.”

• Jason Walser was nominated for being “the epitome of service to the community,” including serving on the Smart Start Rowan Board of Directors and its committees for 20 years. He also served as interim board chair for a time. Presently, Walser works for the Robertson Family Foundation, where a portion of his work lately has been focused on seeing Bell Tower Green Park in downtown Salisbury to completion.

• Cassandra Rankin was nominated for her years of work as the family services coordinator at Prevent Child Abuse Rowan. Rankin’s nomination form said she is a “beacon of hope” and supports families through every part of the process where a child requires a forensic interview due to concerns of abuse. “Her position often requires a great deal of work behind the scenes with little formal recognition,” her nomination form said. “Countless children and their families have been lifted up through Ms. Rankin’s work.”

• Norma Honeycutt, who works as executive director of Partners in Learning, was nominated by several different people. Those who nominated Honeycutt said she’s passionate about supporting children and families; works one on one with children in their homes so they can receive support and therapy they need; uses her own money to buy toys, books, clothing or other supplies for families; and “goes above and. beyond to make a positive impact in children’s lives.