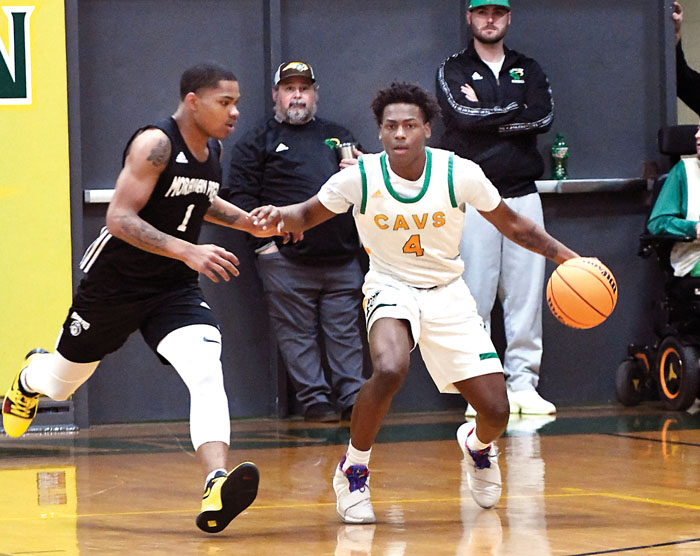 The Cavaliers were overmatched in the third round of the 1A state playoffs, where host Winston-Salem Prep dealt them a season-ending, 71-51 loss.

“Naturally, when the season ends, you’re disappointed,” coach Jason Causby said, moments after seventh-seeded North (22-8) had its seven-game winning streak halted. “But I’m proud of what we accomplished. We graduated our top four scorers from last year’s team, then turned around and won 22 games, including two state playoff games. I don’t know too many high school programs that can say that.”

It marked the final game for North seniors Denerio Robinson, Brandon Jefferson and reserve Malcolm Wilson. Robinson, who muscled inside for a couple of power layups in the opening four minutes, took the loss particularly hard.

“We just didn’t play our best game — and that’s what we needed,” the 6-foot-5 forward said. “In the locker room, it seemed like we were all logged on. We said, ‘All we have to do is play our best.’ But this wasn’t our best.”

It wasn’t even close. W-S Prep (20-8), the state’s No. 3-ranked 1A squad, drained four 3-pointers in the first quarter and jumped ahead of the shell-shocked Cavs, 21-6. When 6-7 post player Zaire Patterson flushed down a sledgehammer dunk early in the second period, he capped a 10-0 scoring blitz that put the hosts ahead by 17 points.

“That just gave us energy,” said Prep’s Stephen Minor, the senior guard who buried six-of-12 three-point attempts and paced all scorers with a season-high 31 points. “We wanted to score as much as we could, as fast as we could, and just stay locked in. We attacked the whole game and kept pushing them downhill.”

North pushed back in the second quarter, when Jefferson, Kendrell Goodes and Quashawn Carpenter each beamed in 3-balls. Teammate Zay Davis hit a 16-foot jumper from straight away with 36 seconds remaining in the half and James Gladden scored on a floater down the lane, drawing North within 35-26 at the break.

“My concern coming in was how would we start?” Causby said, in the subdued North locker room. “We couldn’t stand around and be in awe, or get caught up being tight in a game of this magnitude. But that’s what we did in the first quarter. We couldn’t score, but I don’t think I envisioned them hitting four threes that quickly.”

North finally found some traction early in the third period, when 6-10 sophomore Brandon White scored on a declarative, two-handed jam and Carpenter found an aperture down the lane for a layup that made it 37-30. Following a W-S Prep misfire, the Cavs had a chance to inch within five points — but a costly turnover was parlayed into a Minor jumper and the Phoenix fortified its lead.

“We just weren’t playing hard enough,” White said, after finishing with a double-double (15 points, 12 rebounds). “They came out banging and we didn’t punch back. The rest of the game was frustrating, but I tied to hold myself together and get us back in it.”

That never happened. W-S Prep got another 3-pointer from Minor late in the third quarter and held a 52-25 edge, entering the final stanza. In the fourth, North’s season was circling the drain, and a 12-2 run stretched Prep’s lead to 64-37 with 4:49 to play.

“In the playoffs, you have to get better each round,” winning coach Andre Gould said, shortly after Prep advanced to this week’s regionals. “We have a motto: Be better today than you were yesterday. And be better tomorrow than you were today. We address it game-by-game.”

Gould said Prep concentrated on cutting off drives down the lane and defending corner shots. He was especially impressed with North’s Carpenter, the sophomore point-guard who tallied 13 points — including the Cavs’ last two buckets, 3-pointers from NBA range with the clock melting away.

“We kept trying to find a weakness in him, but we never did,” Gould said. “He plays well with both hands. We did our best to stay in front of him and not let him get going.”

Despite the lopsided outcome, Causby found reason to smile afterward. He carefully steered the Cavs beyond expectations in what was essentially a rebuild that never went underwater.

“We had a chance,” he insisted. “Down single digits at halftime, after being on the ropes and on the verge of being run out of the gym in the first quarter, and we battled back. In the second half, we kind of felt sorry for ourselves and it got out of hand. I knew what we were up against, but I’m proud of the strides this team made as the year went along.”

NOTES: North had won 11 of of its previous 12 games, including playoff victories against North Stanly and North Stokes. The Cavs will have nine returning players next season. … White added two crowd-defying dunks in the second half. … W-S Prep’s Anthony Sellars, a 6-6 junior, contributed 14 points and 13 rebounds. Patterson yanked down 14 rebounds. … Prep will face Mountain Island Charter (24-5) in the regionals on Tuesday. The Raptors grounded Starmount, 80-63, in Saturday’s third round.