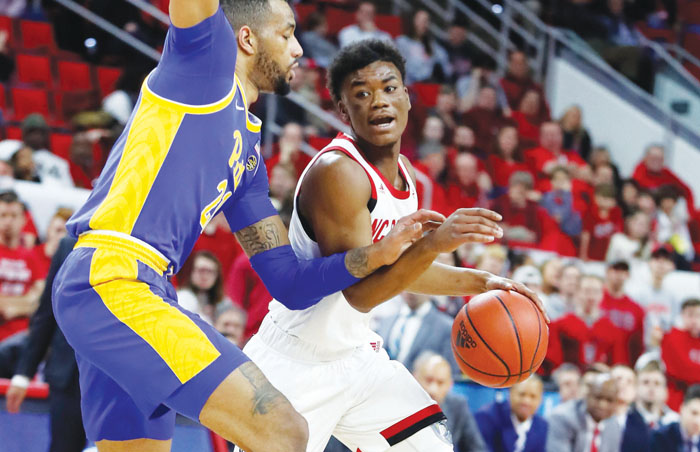 RALEIGH (AP) — Facing the prospect of a loss that would severely damage its NCAA Tournament hopes, N.C. State tightened up its defense late and got a big scoring boost from reserve forward Jericole Hellems to bounce back for a 77-73 win over Pittsburgh on Saturday.

Coach Kevin Keatts admitted that he doesn’t know exactly what to tell his players at this time of year. He feels the need to tell them just how important each game is to their NCAA Tournament credentials, but he’s afraid they will be tight or nervous if he spends too much time talking about it.

Whether he mentions it or not, the players know.

“Right now we talk about it a lot,” said freshman center Manny Bates, who scored a career-high 13 points. “Every game is a big game for us, so we’re just going to have to come in and play our hearts out.”

Nonetheless, N.C. State (18-11, 9-9 ACC) trailed 58-51 with 10 minutes remaining as Pitt looked more like the desperate team for most of the game. But the Wolfpack tightened up its defense and forced the Panthers to miss eight of their next nine field goal attempts.

Hellems, meanwhile, scored nine points in three minutes, including a 3-pointer from the baseline with 6:53 remaining that gave the Wolfpack its first lead of the game at 62-61. Hellems also sprinted down the floor for a layup and a tip-in and scored on a 15-foot jumper during his personal scoring binge.

Pitt briefly regained the lead with two Eric Hamilton free throws, but the Wolfpack scored the next eight points to grab a 70-63 lead and held on to win.

“For us, it was just being positive and staying positive throughout the whole game, uplifting each other so we can finish the game off strong the way we did,” Hellems said.

Au’Diese Toney scored 24 points to lead the Panthers, while Xavier Johnson added 13 points and Justin Champagnie and Hamilton had 10 apiece. Pitt (15-15, 6-13) suffered its sixth straight loss as its overall record fell to .500.

The loss came just a week after Pitt fell by three at home against Virginia. In his second season as coach, Jeff Capel didn’t seem interested in moral victories.

“The bottom line is that we have to win basketball games,” Capel said.

The same is true for N.C. State, which was caught off guard by Pitt’s hot shooting for most of the game. The Panthers were averaging just 29.2% from 3-point range but made five of their first seven from beyond the arc as the Wolfpack opted not to close out hard on most of their shooters.

But led by Devon Daniels, who held Xavier Johnson to three points in the second half after he scored 10 before halftime, the Wolfpack found their defensive rhythm just in time.

“We found a way to win a game when we were not playing very good basketball,” Keatts said. “I thought the last five or six minutes of the game was when we started to play.”

The victory for the Tar Heels (12-17, 5-13 Atlantic Coast Conference) snapped a modest two-game winning streak by the Orange (16-13, 9-9) and put a serious damper on their postseason chances.

The Tar Heels, who ended a seven-game losing streak on Tuesday night with an 85-79 victory over North Carolina State after an awful start, broke open a tight game by hitting six 3-pointers in the first six minutes of the second half.

Anthony hit three of them, Brandon Robinson had two and reserve Christian Keeling’s at 14:00 boosted the lead to 64-48. North Carolina, which entered the game shooting 28% from 3, finished 11 of 26 from long range and outscored the Orange 22-10 on second-chance points.

Keeling continued his recent strong play with 18 points for UNC, which hit 9 of 14 from the arc in the second half after going 2 of 12 in the first.

Bourama Sidibe had 17 points and 15 rebounds for his fourth double-double of the season, and Buddy Boeheim had 22 points to lead Syracuse. Elijah Hughes, the ACC’s leading scorer, finished with 19 points on 5-of-16 shooting and freshman point guard Joe Girard had nine points on 3-of-12 shooting for the Orange.

In his previous five games, Buddy Boeheim had shot 6 of 28 from deep, and had been held scoreless twice in 47 minutes of play in two of the previous four games. Boeheim, who was dealing with an ankle sprain suffered in a win at Pitt on Wednesday night, was 9 of 17 from the field.

WINSTON-SALEM (AP) — Olivier Sarr won the battle of big men as Wake Forest dealt a significant blow to Notre Dame’s NCAA Tournament hopes on Saturday with an 84-73 victory over the visiting Fighting Irish.

Chaundee Brown added 15 points for the Deacons, including a 3-pointer that snapped an 11-0 Notre Dame run early in the second half, allowing the Irish to rally and eventually take the lead. Brandon Childress, playing in his final home game, had 14 points.

The Deacons made 7 of 15 3-point field-goal attempts.

Nate Laszewski came off the bench to score 15 points for the Irish.

Sarr made a variety of shots, including hooks, tips and turnarounds against the 6-9 Mooney and 6-11 Juwan Durham.

CHARLOTTESVILLE, Va. (AP) — Mamadi Diakite made a short, go-ahead jumper with 37 seconds left and Jay Huff blocked Vernon Carey Jr.’s shot under the basket with 3.7 remaining as Virginia ended a three-game home losing streak against No. 7 Duke with a 52-50 victory on Saturday.

Huff led Virginia (21-7, 13-5 Atlantic Coast Conference) with 15 points, nine rebounds and 10 blocked shots, none bigger than when he rejected Carey’s attempt from in close with the Cavaliers leading 51-50. Huff also ripped the ball away, was fouled and made one of two free throws at the other end.

Tre Jones tried an off-balance 3-pointer at the buzzer, but missed, allowing the surging Cavaliers to claim their sixth victory in a row and leap-frog the Blue Devils into third place in the ACC standings with a week left in the regular season.

The game was tied at 25 at halftime and at 39 and 45, the latter with 4:52 to play, and the teams swapped the lead the rest of the way. Diakite’s short shot gave Virginia the lead for good at 51-50, and Huff’s block on Carey finished a sterling defensive effort.