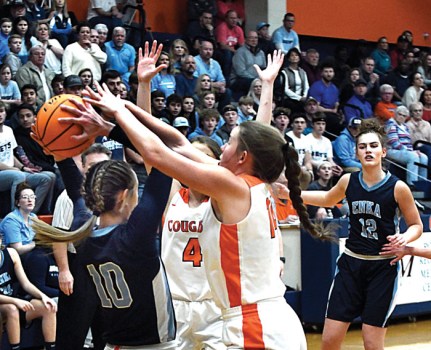 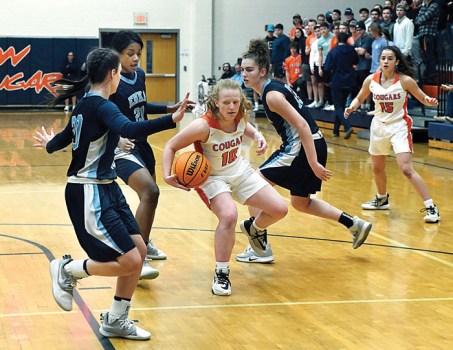 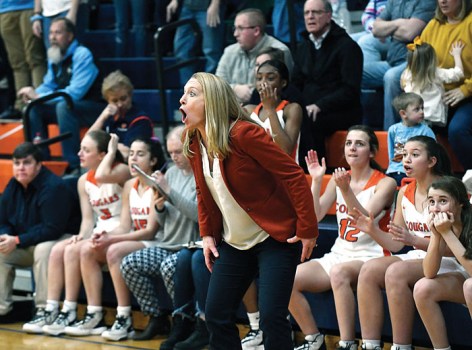 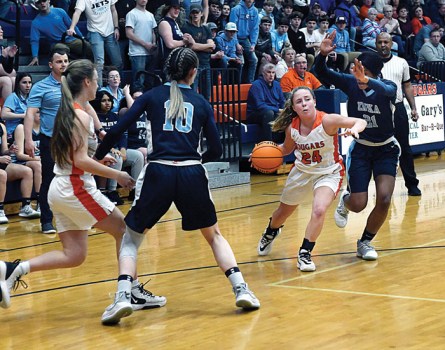 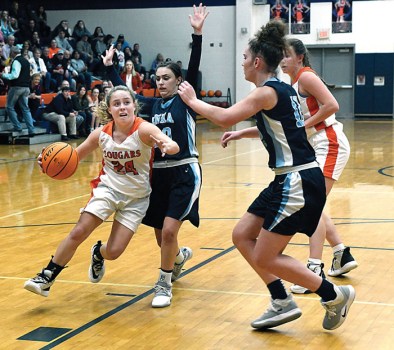 Carson had the ball with a one-point lead, but Enka standout Emily Carver made a steal. Carver missed a 10-foot pull-up, but teammates kept the ball alive, she stayed with it, and she snared the offensive rebound. Her three-point play put Enka up by two.

That was the critical moment in Enka’s wild, 60-58 victory at Carson in the third round of the 3A state playoffs.

“Those ‘and-ones,’ those are always big turnaround plays,” Carson’s Carleigh Perry said. “That one hurt.”

It was a blow for the home team, although Carson (25-4) still had every chance to win, right down to its final trip down the floor. With the fourth-seeded Cougars trailing by two, Colbie Perry got a shot she likes a lot — a 3-pointer out of the left corner. It didn’t go down, and fifth-seeded Enka (24-4) temporarily had the rebound secured, but Carson forced a tie-up and owned the possession arrow. With the clock ticking down to four seconds, Maci Cooper also got her favorite shot, a foot beyond the 3-point line on the right wing, but open. Cooper’s shot was on line but struck the front of the rim and bounded high over the backboard. Carson’s hopes also hopped out of the gym.

Carson wouldn’t get another serious opportunity. After a missed free throw and an Enka lane violation, Carson got the ball one last time, but had to go the length of the court in two seconds. Enka defended Lani Isley’s inbounds pass heavily and with long arms, and Carleigh Perry’s anguished heave from 55 feet was a last-ditch attempt with no chance.

“We had our chances late,” Carson coach Brooke Stouder said. “Open looks, good shots for us. They just didn’t fall.”

Carson shot more accurately and turned the ball over less than it did in Thursday’s win over Enka’s rival, Asheville, but the Cougars weren’t as good on the boards as they were against Asheville.

“We didn’t rebound well,” Stouder said. “They got 14 second-chance points. That was the difference.”

Enka is in Candler, in the Blue Ridge Mountains, about 140 miles west of China Grove, but the Sugar Jets brought an zealous crowd to China Grove.

“That crowd, and I know some of it was their crowd, fired everyone up,” Carleigh Perry. “We were fired up, even in warmups. We were ready.”

Carson got scalding hot a few minutes into the game and reeled off 15 straight points. Taylor Conrad got the Cougars started with two layups. When Ellie Wilhelm, Maci Cooper and Colbie Perry banged consecutive 3-pointers, Carson led by a dozen at 17-5.

“We couldn’t have asked for a better start,” Stouder said.

But then Carver got going. A junior with Division I offers (Appalachian State, Western Carolina, UNC Asheville, etc.), she can slice to the hoop or make 3-pointers. She shot an incredible 26 free throws in Thursday’s second round and scored 35 points. Carson didn’t have any answers for Carver for quite a while, and Enka went from down 12 to up four in a hurry.

“A game of runs and we’ve been in our share of those,” young Enka coach Aaron Reagan said. “Carson plays incredibly hard, as hard as anyone we’ve seen this year. We got down, but we continued to battle.”

By the end of the half, things were swinging back Carson’s way again. Colbie Perry fed Carleigh Perry for a forceful three-point play for 34-all, and the Perry cousins punched the air simultaneously. Colbie Perry made a 3-pointer to propel the Cougars to the locker room with a 37-34 lead.

“What we talked about about the half was the box-outs,” Carleigh Perry said. “They were hurting us more with their second shots than their first shots.”

Carson had a chance to take control in the third quarter because Carver didn’t score in that quarter. Wilhelm was playing good defense on her and she was in some foul trouble and wasn’t forcing anything. That was a critical juncture, but Carver’s teammates, Hadleigh Dill, a freshman, and Hannah Daves, a sophomore, stepped forward. Dill made a couple of big oness, including a 3-pointer when Carson had the Sugar Jets down eight and reeling.

“Just a really key stretch there where different girls, especially Dill, stepped up and scored for us,” Reagan said. “Carver may not have scored in that stretch, but she gives the rest of our team confidence just being out there. When she got her third foul, she sat down for about 45 seconds, but we knew we had to have her on the floor.”

Cooper suffered an ankle injury Thursday, so it was a surprise she played. She made a 3-pointer to close the third quarter. When she hit another one to open the fourth, Carson led 52-47, but Carver quickly was on the attack again, and the Cougars had their hands full holding her off. Colbie Perry hit a 3-pointer, but Carson fans were still yelling when Dill nailed one for Enka.

“They’re just really good,” Stouder said. “We made a lot of big shots tonight, but we still couldn’t get any separation.”

Carson was clinging to a 55-54 lead when Carver made her game-changing three-point play with 3:30 on the clock. Daves made two clutch free throws — she banked the second one — to put Enka up 59-55 — and the visitors started chewing clock in their delay game.

Wilhelm, who got banged up in a collision  and had to leave the game late, made a free throw for Carson, and Hannah Isley slashed for a bucket that cut Enka’s lead to 59-58 with 1:11 remaining, but those were the Cougars’ last points.

Carver made a free throw for Enka’s final point with 35 seconds left.

It got wild after that. Carson had several chances, but the Sugar Jets held on, and Enka fans surged on to the court to celebrate when it was over.

“We’ve got a great fan base,” Reagan said. “They appreciate how hard we play, and they support us no matter where we go.”

Carver led the Sugar Jets with 26 points. Dill had 14.

Carleigh Perry shot 5-for-10 and had 13 points and seven rebounds to lead Carson. Colbie Perry’s 12 points all came on 3-pointers, as did Cooper’s nine. Hannah Isley had four attacking hoops for her eight points.

While Enka moves on to battle top-seeded Freedom in Morganton, Carson packs away the uniforms, but 25-4 was a remarkable season for an undersized team that also isn’t overloaded with quickness and leaping ability. Basically, the Cougars just fought. Every night.

“We got a lot of leadership from a great senior class and we found ways to beat really good teams and to win championships,” Stouder said. “We may have lacked some things, but we always made up for what we lacked with heart and hustle. This was a very tough loss, but we’ll look back on a great season. These girls gave me everything they had — and maybe even some more after that.”