Man who fell off 75-foot bridge reunited with rescuers 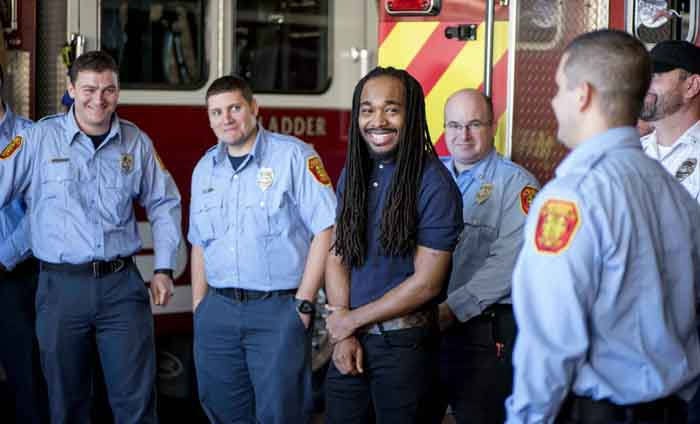 JON C. LAKEY/SALISBURY POST Jeremiah Cribb (center) is all smiles as Salisbury Firefighter Jacob Vodochodsky (right) steps forward to make a few comments about the rescue. Cribbs stopped by the Salisbury Fire Station late Thursday to thank first responders, firefighters and EMTs for coming to his aid on I-85 last week. Salisbury,North Carolina,2/27/20.

SALISBURY — A week ago, Jeremiah Cribb was found lying in a mud pit after he took a 75-foot fall from the Yadkin River bridge on Interstate 85. On Thursday, he was reunited with the 16 emergency responders who rescued him.

The 24-year-old was trying to dodge a speeding tractor-trailer after he pulled over to help a disabled motorist. Cribb, a driver for FedEx, was headed to Greensboro around 2 a.m. Feb. 19 when he came upon an automobile accident in the northbound lane.

He stopped to help. When a tractor-trailer struck the disabled vehicle, Cribb tried to avoid being struck, too, but was instead seriously injured. Cribb jumped over the bridge’s concrete barrier, believing there was a grassy area on the other side.

Salisbury and Miller’s Ferry firefighters rappelled down to Cribb and ushered him into a waiting ambulance. Cribb had few injuries despite falling over seven stories. Most people he’s encountered since the incident can’t believe he’s not more seriously injured or dead, Cribb said.

When asked what he thought of his rescuers, Cribb said he was appreciative and happy to see them.

“Thank you is not enough,” the 24-year-old said after shaking hands and exchanging hugs with his rescuers.

Cribb said he saw some of the photos of the incident and said he thought to himself, “I’m not supposed to be seeing these photographs,” he said.

Recalling Thursday the first moments after the fall, Cribb said he checked himself and was disbelief that he’d fell so far. The drop took mere seconds before impact with the ground, he said.

Cribb said he’s been called a hero because he stopped to do what many would not have done — help another motorist. But he said that’s not the case.

“If this would have gone any other way, nobody would’ve known my name,” Cribb said. “I was just doing something that I do on a regular basis. Something I love doing is helping people. So if it would’ve came to a different outcome it would’ve just been a regular workday for me.”

Salisbury Firefighter Jacob Vodochodsky was the first rescuer to reach Cribb. He was followed by firefighter Kinston Nesbitt — both of whom rappelled off the bridge to gain access to Cribb.

Nesbitt said he expected Cribb to have serious injuries, but he saw Cribb standing when he reached the bottom of the bridge.

Cribb told the firefighter that he was sore and in pain. He ended up having a partially collapsed lung and three broken ribs.

It was an exciting rescue, Nesbitt said, but “that’s what we train to do.”

“It turned out to be a great outcome. I was expecting something a little more complicated,” Nesbitt said.

Salisbury Fire Department Battalion Chief Nick Martin said that Nesbitt and Vodochodsky as well as all firefighters “live for the opportunity to serve.”

“That night was absolutely a tremendous opportunity for them to do what they’ve been called to do and what they prepared to do,” Martin said of the rescuers.

But there’s something more important worth noting, Martin said.

“Jeremiah became one of us; to stop on a bridge on 85 mph roadway, at 3 in the morning in the rain,” he said. “He stopped to help people and that’s what we do.”

Martin said some firefighters felt as if they were rescuing one of their own.

“We’re trained to do this, we’re equipped to do this and we’re expected to do this. He did what we do but without the benefit of all that training and equipment. We’re very proud of him for that,” Martin said.

A GoFundMe campaign has been created for Cribb, who will be out of work for the next few months. He has plans to donate some of the proceeds to others.