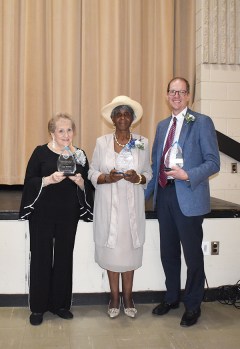 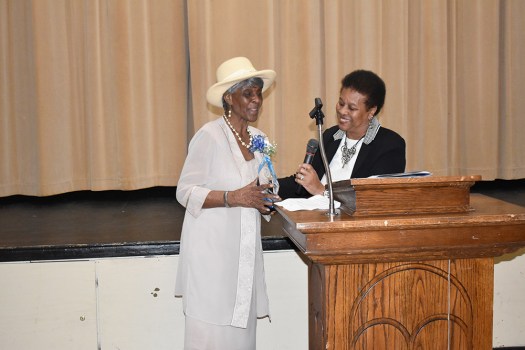 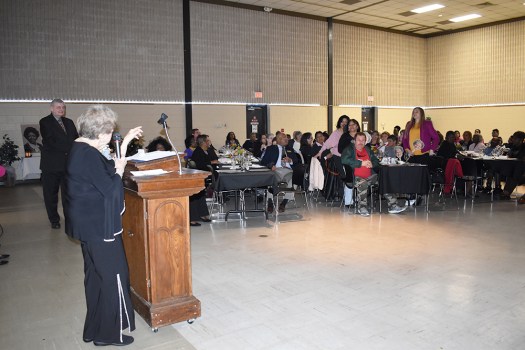 Honoree Char Molrine asks her Literary Council students to stand to be recognized. 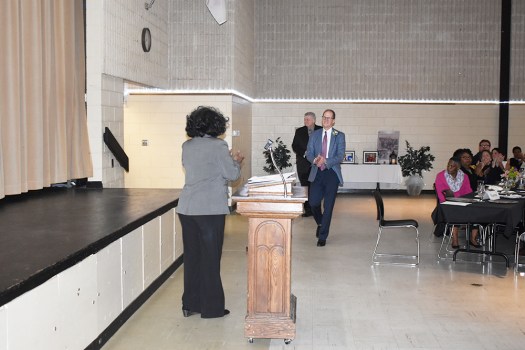 SALISBURY — To keep the legacy of Elizabeth Duncan Koontz, the Human Relations Council recognized community members Thursday for their service at the annual humanitarian awards.

Alcorn, a Salisbury native and the founder and CEO of Global Contact Services, was recognized for creating ApSeed, a nonprofit that provides a free, age-specific touchpad to low-income children. More than 8,000 touchpads have been distributed.

Bates was recognized for her service with Society of St. Andrews, where she collects leftover fruit and vegetable crops to distribute to the community. She has also volunteered with Meals on Wheels for 42 years.

Molrine is known for her years of volunteering with the Rape Crisis Council, Guardian ad Litem, Red Cross, Rowan Helping Ministry, Literacy Council and as chairperson of the Trinity Oaks Scholarship.

John Schaffer, chair the Elizabeth Duncan Koontz Committee, said the evening aims to celebrate the memory of the national education and civil rights leader from Salisbury in addition to acknowledging the honorees.

“Their presence, their nomination and their winning is testimony to what they have done to foster the likelihood, the memory and accomplishments of Mrs. Koontz,” Schaffer said.

DeeDee Wright presented Alcorn his award, saying she didn’t know the Salisbury businessman but that she did know Koontz.

“She would be very proud of the work Mr. Alcorn is doing for our community relative to education,” Wright said. “She was a firm believer in education and she believed that every child should have the opportunity to thrive and grow at the best of their ability.”

Koontz and Alcorn were cut from the same cloth, she said.

Alcorn said the award shows the community’s continuation of Koontz’s legacy and that its residents are trying to achieve what she achieved. He vowed to make sure the community does everything it can for equality, the disadvantaged and helping the next generation.

Committee member Brenda Brown said she met Bates six months ago when she signed up to volunteer with Meals on Wheels. Brown soon learned Bates was an “Energizer Bunny.” Brown called Bates “the mother of Spencer, East Spencer and Salisbury.”

“We want to say on Feb. 27 thank you for being that phenomenal woman always smiling, always willing to give us the helping hand,” Brown said.

Bates said she always looked up to Koontz.

Dora Wood said she has known Molrine for 15 years. Using the letters in Molrine’s first name, Wood said Molrine was a community-minded person, humanitarian, active and ready to do anything.

Mayor Pro Tem Al Heggins said the humanitarian awards allow the city “to give flowers to the living.”

Rowan County Commissioners Chair Greg Edds said the community needs to be constantly reminded of the remarkable person Koontz was.

On behalf of the commissioners and the more that 800 county employees, “we’re grateful to be standing in the shadow cast by a truly remarkable woman.”

Speakers Thursday also shared accomplishments of Koontz, who broke race and gender barriers. She was the first African-American to serve as president of the National Education Association and was appointed by President Nixon to lead the Women’s Bureau at the Department of Labor.

Anthony David, Livingstone College chief operating officer, said when Koontz became the president of the National Education Association in 1968, it was the same year that Martin Luther King, Jr and Sen. Robert  F. Kennedy were assassinated and as the protest at the Summer Olympics.

David said Koontz believed the community should “use our united power to bring about change.”

Schaffer thanked the honorees for their decades of work.

“We hope that we can aspire to the goodness that they have done already,” he said.