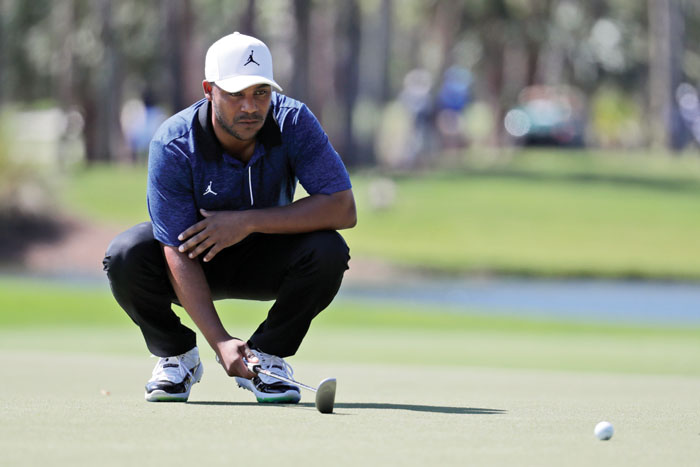 Harold Varner III lines up a putt on the eighth hole during the first round of the Honda Classic golf tournament Thursday, Feb. 27, 2020, in Palm Beach Gardens, Fla. (AP Photo/Lynne Sladky)

PALM BEACH GARDENS, Fla. (AP) — Sponsor exemptions are basically free-play gifts handed out by the people in charge of golf tournaments, a handful of invitations available most weeks to those who wouldn’t have otherwise qualified for an event.

Tom Lewis and Harris English were among the recipients for The Honda Classic.

They made the most of those chances Thursday.

Lewis and English each shot 4-under 66 at PGA National, sharing the lead after the opening round. Lee Westwood — also in the field thanks to a sponsor exemption — was a shot back with Zach Johnson, J.T. Poston, Brian Stuard and Cameron Tringale.

“I didn’t hit it my best, but I knew it was going to be one of those rounds you’re going to have to grind it out,” said English, a two-time winner on the PGA Tour in 2013, but winless since. “It’s windy out there, you’re going to have a lot of cross-winds, and it played really tough. My short game was on point, and I made some really good putts.”

Sometimes, no putt was required: English holed out from about 25 yards on the par-4 11th, catching a great lie after a drop because his second shot came to rest on a sprinkler head.

“That was as good as I can do,” English said.

It was a rare easy-looking shot at PGA National. The average score was just a smidge below 2 over, on a day where wind gusts often topped 20 mph.

“It’s just live and survive, basically,” said Matthew NeSmith, who had a hole-in-one on the par-3 fifth.

Westwood hit 11 of 14 fairways and was thoroughly pleased with how the day went.

“Everybody should play like that,” Westwood said. “Everybody who’s out here is in a privileged position with nothing to lose. We should all be having fun. But at the age of nearly 47 it seems even easier. I don’t play anywhere I don’t want to play. I just play great tournaments and the ones I want to play in, and I set my own schedule, and it’s just great fun.”

Lewis made his splashy entrance into golf headlines in 2011, when the then-amateur Englishman was a surprise co-leader after the opening round of the British Open. He played that opening round with Tom Watson, the five-time British Open winner who happens to be Lewis’ namesake and his father’s favorite player. He wound up as the European Tour’s rookie of the year that season.

Not much has gone right since.

“I struggled for a while, and then I think really things got so low that you couldn’t get any lower,” Lewis said. “So it was like, ‘Well, only good things can happen now.’”

Good things happened in bunches Thursday, when Lewis had a bogey-free round.

“It can just happen,” Lewis said, a few minutes before he sat in relative anonymity inside the resort’s hotel lobby and had lunch while fans walked by mostly oblivious to the fact that they were passing a co-leader. “Just one shot, one putt at the right time or good break and then all of a sudden it can snowball. I need to take a lot of belief from today.”

Plenty of others weren’t as chipper as Lewis and English were when their days at PGA National was over.

Third-ranked Brooks Koepka, in his hometown tournament, made a triple bogey and a double bogey in a four-hole span on the front side on his way to a 74.

“Didn’t feel like I played that bad,” Koepka said.

Defending champion Keith Mitchell finished birdie-birdie and still shot 75. Rickie Fowler, who won the Honda in 2017 and tied for second with Koepka last year, made one birdie all day and shot 76.

“It’s a fine line,” Fowler said. “Just got it going in the wrong direction.”

That happens at PGA National. Only 22 of the 144 players broke par.

DIVOTS: U.S. Open champion Gary Woodland (70) made a great birdie on the par-5 18th, chunking his third-shot chip from about 15 yards off the green and then rolling in a putt from the fringe anyway. … Viktor Hovland, the winner last week in Puerto Rico, shot 77 and beat only two players — Jim Furyk (78) and Satoshi Kodaira (80). … Koepka’s triple bogey on the par-4 sixth was his first in his last 447 competitive holes. … English likes to have breakfast two hours before early rounds, but a 6:45 a.m. tee time Friday could complicate matters. “Not sure it’s open at 4:45,” he said. Another issue: Forecasters say it’ll only be around 47 degrees when play starts Friday.