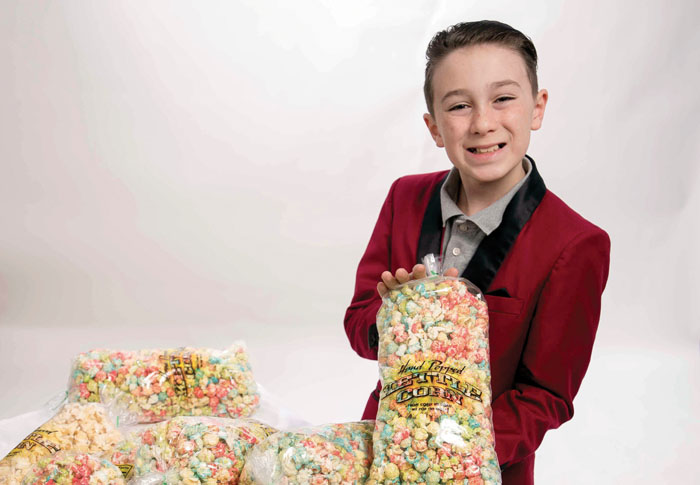 JON C. LAKEY/SALISBURY POST Rylan Furr (10 years old) poses with a table of regular kettle corn and rainbow kettle corn that he plans to give out to those who are homeless in the community. Salisbury,North Carolina,2/21/20.

Most students would just sell kettle corn for their school’s PTA fundraiser, but Rylan Furr is not most students. He has taken donations instead to do something nice for people who have very little. He gave all his kettle corn to local people experiencing homelessness and did something similar when the group had a cotton candy fundraiser. He collected money for the sugary treat and took it to a local retirement home to give to residents.

“It’s just a feeling that attaches to you,” Furr said. “Once you do it you can’t let it go.”

Killian said it is not out of character for Furr to think about others, and in class he is very studious, taking the time to make sure his work is correct.

Furr also loves to cook, and Killian said it is not uncommon for him to make people’s favorite meals — just to do something nice.

Furr said the experience has been heartbreaking when he has visited homeless shelters. Furr said he needs to learn more about what causes people to become homeless because he does not quite understand it yet.

He said he wants to spread care for people who may be living on the street.

“A lot of people just walk by and don’t even say anything to them, they just stare,” Furr said. “I will volunteer and everything. I think it’s not right. Every person is someone.”

Furr’s altruism goes beyond handing out treats to people who are going through difficult times. He makes a point of shaking the hand of any veteran he meets. He said he enjoys doing things for other people — that he likes to see the smiles on people’s faces

“I learn so much from him,” Furr’s mother Melissa Secreast said.

“Our entire living room was full of cotton candy, because he got such a huge response,” Secreast said.

There was so much — too much — cotton candy for the retirement home that he delivered the rest around businesses in Spencer.

Furr was a second grader when he gave out all the cotton candy, and Secreast joked that he would have kept the leftovers if she was in his position.

“He has one bag of this popcorn though, Secreast said.