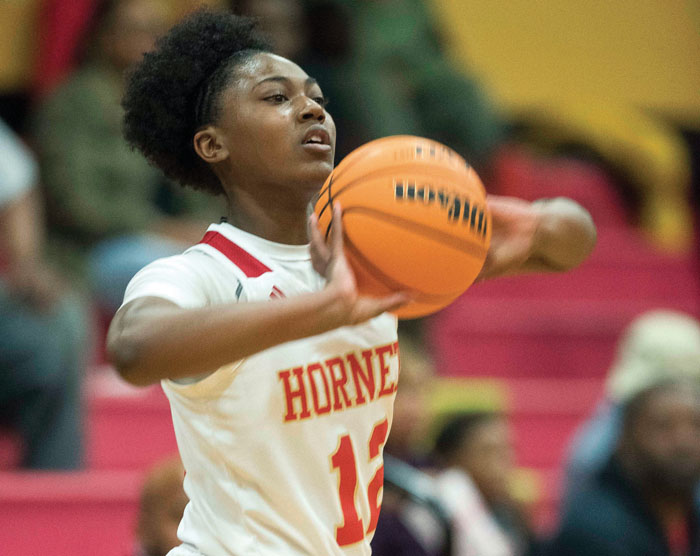 The No. 1-seeded Hornets defeated Wilkes Central, 53-33, in a state 2A second-round playoff game here at the Salisbury gym — their 19th straight victory. Fulson led the way with 17 points, eight rebounds, four steals and plenty of assists.

And if that score sounds familiar, the Hornets beat East Gaston in Tuesday’s playoff opener, 55-33. Salisbury, now 27-1, will be hard to beat if it holds everyone to 33 points.

Salisbury turned the tables last night, sprinting to a 12-0 advantage before the Eagles could take flight.

“We knew coming in that Wilkes Central was a scrappy team that thrives on quick starts,” said Salisbury coach Lakai Brice. “Our game plan was to get out to our own quick start. We wanted to win the first four minutes.”

Mission accomplished. Salisbury’s much bigger, quicker defense smothered the visitors, allowing the Eagles just one basket during a 16-5 first quarter.

“Their length and size really bothered us,” said Wilkes Central coach Greg Davenport. “We didn’t get many shots and when we got a few, we couldn’t make ‘em.

“We knew that we’d have to handle their pressure,” he continued. “And, for the most part, I didn’t think we turned it over that much. But what we didn’t take into account, and it’s something hard to see on film, is the size. It’s not that Salisbury is that tall, but they’re solid and physical. They killed us on the boards.”

Wilkes Central had 10 turnovers for the game and the “boards” revealed a 48-23 rebounding advantage for the Hornets, led by freshman Jamecia Huntley’s 14 and the eight from Fulson. Senior guard Jenesha Mashore even came off the bench with five rebounds.

Both teams struggled with foul problems throughout the game. The Eagles’ free-throw shooting (18-of-25) kept them in the game, as Wilkes Central was just 7-of-40 from the floor (17.5 percent).

However, when the Eagles did cut the Salisbury lead to 16-10, early in the second period, Fulson took over. Over the next two minutes, Fulson scored the next seven points and assisted Huntley for two more. It was suddenly 23-10, with 4:08 left in the half and Davenport was calling a timeout.

“That’s what a senior point guard does,” Brice said, of Fulson’s performance. “It’s her last year and she doesn’t want to lose, so I put the ball in her hands. She’s got to make things happen and that’s what Anayia did for us tonight.”

Fulson acknowledged that defense was on her mind more than offense and took Brice’s praise in stride.

“I always have the mentality to lead my team,” said Fulson. “Our job was to stop them from shooting threes and from getting to the basket. That’s how they won their first game and we were ready for them.”

Other than putting Wilkes Central at the free-throw line, Salisbury’s defense was remarkable. The Eagles’ leading scorer, Erica Wyatt, had six points, four coming in the final period when the game had already been decided.

Through the first three quarters, Wyatt, who got into foul trouble early, was 0-for-3 from the field and had only two free throws in the book.

A small Wilkes Central rally had gotten the Eagles to within 28-17 by halftime, but led by scoring from all five starters — Rachel McCullough, Kyla Bryant and Jaleiah Gibson, along with Fulson and Huntley — Salisbury won the third quarter, 15-6, to go up 43-23, heading into the last period.

One drawback for Salisbury was a miserable night at the foul line. McCullough, the Hornets’ top free-throw shooter, never got to the line. However, her teammates did, making just 10-of-25 (40 percent).

“We had less turnovers than our first game, but missed a lot of free throws, so we corrected one thing but have to get better on another,” added Brice. “That’s always a key for us, making free throws and layups and limiting turnovers. All of that didn’t happen tonight, but we still got the win. We did a good job of rebounding and pushed on transition. Aniya and Rachel got some shots and Huntley really brought some energy. She did a fabulous job of controlling the boards and really getting after it.

“Our size was a little overwhelming for them, I thought,” continued Brice. “I’m not sure they realized how big and strong our girls are, even though most of them are freshmen and sophomores. Going forward, we’ve still got to get better in executing our offense. We did a better job this game, not taking quick shots, but I thought our defense was the key to our victory. ”

NOTE: Salisbury’s third-round game is scheduled to be at home on Saturday, but the opponent has yet to be determined. The Forest Hills at Ashe County game was postponed Thursday due to winter weather that hit that area yesterday.