MLS embarks on 25th season by looking back, and forward 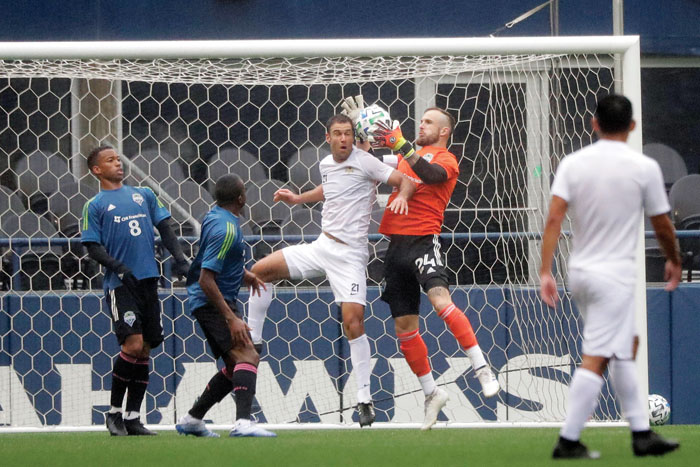 As Major League Soccer embarks on its 25th season with two new expansion teams, it seems worth noting how far the league has come in that quarter-century.

And what better way to look at that evolution than to ask its first employee.

MLS President and Deputy Commissioner Mark Abbott has been around since long before legends like Landon Donovan, Carlos Valderrama and David Beckham graced the league.

Abbott has seen the expansion of MLS from 10 teams in 1996 to 26 teams this season. Four more are on the way.

He joined MLS three years before its first season and wrote the league’s business plan. He rode out the dark days of contraction in 2002 before the re-emergence of the league under current Commissioner Don Garber.

He’s seen soccer go from the “next big thing’’ to a legitimate major league sport.

“If you think about the modern era of professional soccer, beginning with the World Cup in the United States in 1994, if you think about how people were 6 or 7 or 8 years old at the time, and maybe that was the first time they were watching a sport or sporting event. Now they’re in their late 20s or early 30s. So you have an entire generation of people who grew up with soccer as a mainstream sport in this country, which was different than the way I grew up. And so I think it has been a process of the market developing, and the league making investments to help develop that market.” Abbott said. “Clearly in the last few years, when you see what’s happening in some of these markets where you get 70,000 people in Atlanta, or what happened with our MLS Cup in Seattle, or what’s happening with our El Trafico game in Los Angeles, you realize this league means a lot to a lot of people.”

“The children that are now in their 30s, the biggest sport to them growing up was soccer. And that’s kind of where we’re at,” Larentowicz said. “So the iron is hot, it’s time to strike. I think the league is doing that, expanding and trying to really push that. That generation is here.”

The stats back him up. A Nielsen survey showed interest in MLS grew 27% between 2012 and 2018. And a Gallup poll from two years ago showed soccer was tied with basketball in popularity behind American football among fans ages 18-34.

The 25th season will be the first for teams in Nashville and Miami. Charlotte, Austin, Sacramento and St. Louis will get clubs in the next two seasons, bringing MLS to 30 teams.

For now, the plan is to sit tight at 30, Abbott said. As the 1994 World Cup on home soil led to the start of the league, the 2026 World Cup, a joint effort between the United States, Mexico and Canada, is on the horizon.

“We began with the league launching as an outgrowth of the World Cup here in 1994, and it will be our 30th season (in 2026) and I think an opportunity really to show the country and the world that soccer, and Major League Soccer, is a major-league sport and one of the top leagues in the world.”

But before getting too far ahead, here’s what to look for when the 25th season of Major League Soccer begins this weekend:

The LA Galaxy, no stranger to big-time signings, brought in Javier Hernandez — better known as Chicharito — to replace another big name, Zlatan Ibrahimovic. The speedy Mexican international has spent the last decade in Europe. He’ll be tasked with replacing the offensive firepower of Ibrahimovic, who had a franchise-record 30 goals last season before he bolted for Milan.

The 31-year-old Chicharito is the top goal-scorer in the history of the Mexican national team, which has a fervent following among Los Angeles’ expansive Latino population. His signing has already resulted in a boost in ticket sales, and points to an epic El Trafico rivalry with LAFC and fellow Mexican international Carlos Vela.

MLS and its players agreed to a new five-year contract this month, avoiding the possibility of a work stoppage to start the season.

It includes greater investment in player spending, and flexibility for the league’s teams in spending those funds. It also expands free agency and allows teams to take more charter flights, which the players had prioritized.

After some seven years of planning, David Beckham’s MLS team is at last a reality. Inter Miami, with its sleek Miami Vice-reminiscent pink logo complete with herons, appears to be off to a solid start.

While Miami FC looks to make a splash, Nashville SC appears to be looking more at the long game and building a connection with the city and its fans. Coach Gary Smith, who led the Colorado Rapids to the 2010 MLS Cup title, has built a foundation of capable veterans like Dax McCarty and Walker Zimmerman to complement young talent like Hany Mukhtar.

“I think the core and the spine of our group is very capable, it’s strong and experienced, which will serve us well,” Smith said. “I’ve actually been most impressed with the way that the group has managed the ball — not necessarily creatively, but how we’ve set about our business in possession and some of the choices that are made.”

Ten players from Mexico’s top league, Liga MX, have joined MLS in the offseason. They include Miami’s Pizarro, D.C. United’s Edison Flores, Sporting K.C’s Alan Pulido, and Vancouver’s Lucas Cavallini, who was lured back to his native country by the Whitecaps.

Nine of those players have represented their countries in international play, with more than 200 appearances and 38 goals between them.

MLS is expanding its tournament with Liga MX. The competition debuted last season with four teams from each league. Last year’s winner was Cruz Azul, which downed Tigres UANL 2-1 in Las Vegas in September.

This season there will be eight teams on each side. The Philadelphia Union, Real Salt Lake, Minnesota United, LA Galaxy, Toronto, D.C. United, Portland and the Red Bulls will be pitted against Monterrey and other Liga MX clubs to be determined.

Braves’ Foltynewicz ready to put 2019 season behind him