SALISBURY — Republican Greg Gebhardt is running for lieutenant governor on a platform focused on veterans, voter ID and vocational trades. 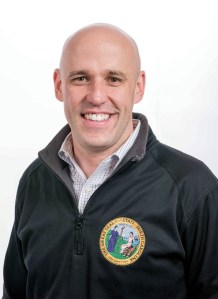 Gebhardt is an Iraq War veteran and currently serves in the National Guard. He says the state needs to invest more in veterans’ mental health initiatives. While transitioning from active duty to civilian life, Gebhardt said he struggled with his mental health.

“What about the young soldier that doesn’t have that at their disposal?” he said. “What are we doing to address their mental health concerns?”

He wants to invest more time, money and resources into mental health resources for veterans.

Gebhardt said the stigma that men don’t suffer from mental health needs to be removed. He said sharing his story, especially as a lieutenant governor in a state with a large military presence, would help move the conversation forward.

He also wants to retain veterans in the state by championing legislation that supports a 0% income tax on their retirement pay.

“We’re running out of plumbers, electricians, HVAC techs, welders, certified nursing assistants,” Gebhardt said. “Why are we not letting these kids know about these opportunities?”

Across the state, the option for vocational training should be known as students enter high school, he said. Students can take classes at a community college in order to get a certificate in a trade by graduation. He said this model would help the economy.

“They’re a productive taxpaying citizen giving back to the system whereas it took me 16 years to pay off one year of college,” Gebhardt said. “What that meant is I didn’t have that disposable income to put back into the economy to make the economy run because I was saddled with student loan debt.”

Gebhardt is a proponent of the state’s voter ID law that’s current the topic of a court battle. As a staffer for Rep. David Lewis, R-53, Gebhardt said he helped draft the legislation.

U.S. District Judge Loretta Biggs formally blocked the  photo ID requirement in December. He said “it’s reprehensible that an activist judge overturned the will of over 2 million North Carolinians with the stroke of her pen.”

He compared showing a voter ID at a polling place to buying a shotgun at Walmart.

“I think we could still work on our agenda under a Cooper administration,” Gebhardt said.

The Republican lieutenant governor candidate race is crowded with Gebhardt among nine running. But Gebhart said he is the only one with a plan.

“Others in the race stand up and say they love God, they love guns and they love babies,” Gebhardt said. “Well I love all of those things, too. What are you going to do with the office to advocate for those things? … I’m just an average kid who comes from a very average family.

He said his story is not too uncommon.