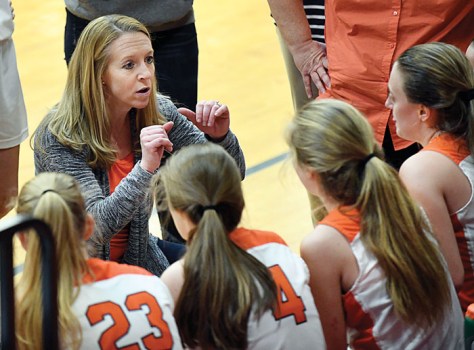 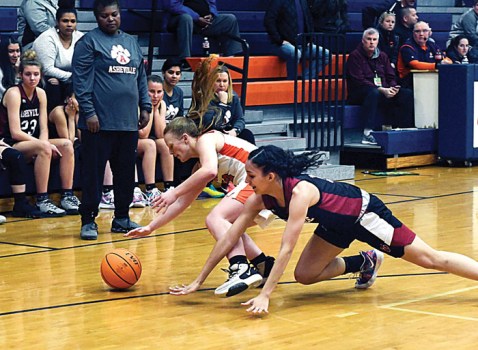 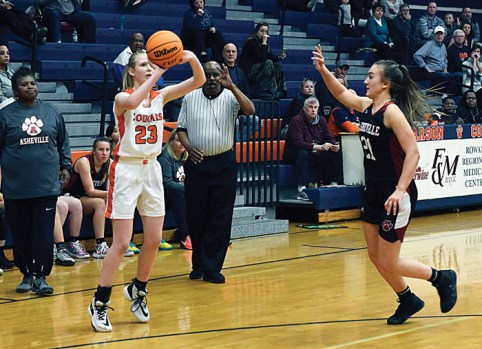 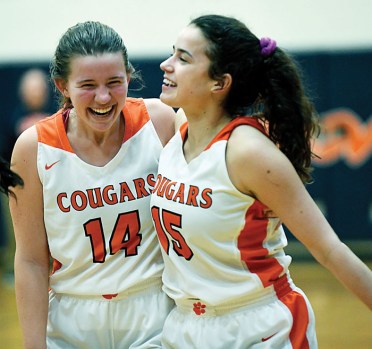 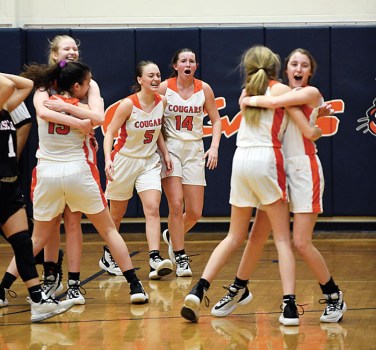 CHINA GROVE — Can you really win a second-round 3A playoff game while making 31 turnovers?

Carson’s girls supplied the answer to that question on Thursday, and the answer is yes. There were major misadventures in the ball-handling and passing aspects of the game, and part of that was officials letting the teams play. Grabs and holds and pushes that normally draw whistles in the mid-court area were simply “play-on” situations.

Carson has some rather frail-looking girls, but there was no shortage of grit from any of them.

Fourth-seeded Carson got 15 points. most of them humongous, from sophomore reserve Hannah Isley and survived Asheville, 52-49. Survived is the only verb that works.

Carson lost leading scorer Maci Cooper to an ankle injury after she’d been on the floor about a minute. The 3-pointers that are the lifeblood of Carson weren’t falling. Carson had three players with four fouls heading to the stretch run. Carson missed three big one-and-ones. But … no problem.

“All I can say is we wouldn’t cave,” Carson head coach Brooke Stouder. “We just wouldn’t cave. Through it all, we kept coming.”

Asheville (22-5) came in averaging 70 points with a breakneck style. Asheville wanted to fly, even after Carson scored.

Carson (25-3), which came in allowing 38 points per game, won the tempo tussle, made it a grinding, grueling struggle played mostly in the half court.

“Asheville — they go,” Stouder said. “The priority for us — get back on defense. Sprint back. We did that OK, mostly made them play half court. They’re still a solid drive-and-kick team in the half court, but not as scary as when they can get out and run. We want to play fast, but they want to play faster than we do.”

Carson turned it over 21 times before halftime. Yes, 21 times. Fortunately, most of them weren’t  of the steal/layup variety. Even after turning it over, Carson hustled back and defended.

With Cooper’s deflating injury and the 21 miscues, it might have been over at halftime, except that Ellie Wilhelm and Carleigh Perry, who combined for 17 points in the first half, wouldn’t let it be over. When Wilhelm made a steal late in the half and Isley made a 3-pointer, Carson somehow stumbled to the break leading 25-23 and had a chance to regroup.

Carson got a good start to the third quarter. The home team got a lift from Victoria Post, a senior who normally is the eighth person and might not even play in a tight game. But with Cooper down and with fouls sending teammates to the bench, she was logging crucial minutes and not making many mistakes. Then she made a 3-pointer.

“I’m a senior, I love this team, and I didn’t want this to be the last game we played,” Post said. “I was determined — step up, do my part.”

When Isley drove for a three-point play, Carson suddenly had some separation, up 37-29, with 3:43 left in the third quarter.

Asheville got a timeout, and now the visitors refocused and got after it. Carson couldn’t keep Asheville’s long freshman Evangelia Paulk off the foul line. Carson’s eight-point lead melted to two. Colbie Perry drove for a bucket to close the quarter, and Carson carried a 41-37 lead to the fourth.

And then it looked like Carson might be out of gas. Aleysha Hill only made one bucket for Asheville, but her driving and-one to open the final period, energized the visitors. When Ava Yurko made two straight shots, Asheville caught up, and then surged ahead.

When Carson called a timeout with a little over three minutes left, Asheville had a 46-43 lead.

“We’d had a lull, missed a bunch of free throws, couldn’t score,” Stouder said. “But we still were only down three. It’s still a one-possession game, and we’ve been in a whole lot worse spots. I reminded them of that.”

Isley makes some 3s, but mostly she’s a driver. Somewhere in that huddle, she’d made up her mind to take it strong if she got the chance.

Her free throws with 1:50 remaining cut Carson’s deficit to a single point.

With Carson down 49-47 with 43 seconds left, Isley turned the corner on her defender and kept coming. Her three-point play had fans rolling in the aisles and was the game-changer.

Paulk got a shot up in the lane with 14 seconds left. It wouldn’t fall, and it was Carson’s ball out of bounds.

“We stayed in front of our man, wouldn’t let them get all the way to the basket,” Isley  said. “And then everyone boxed out.”

It was Isley who ended up with the ball against Asheville’s press. She was fouled near mid-court with 9.5 seconds left.

Asheville hurried the ball into the front court, declined a tough 3-point try and calmly got a timeout with 5.5 seconds left.

Paulk took the 3-point shot, from right in front of the Asheville bench. She shot it smoothly. It was on line. It had a chance. It didn’t go, rattling off to the right side where Post was stationed. Rather than chasing the ball, Post boxed out her man. They all did. The ball hit the floor, and a second later, it was over.

“We knew we could give up a layup and that made it easier to defend the 3-point line,” Post said. “If they got a shot off, we knew we had to get the rebound, and get it without fouling.”

Carson did everything right the last two minutes. That made up for all the things that went wrong prior to that.

Carleigh Perry shot 6-for-11, scored 13 and had eight rebounds. Isley shot 4-for-5 from the field and 6-for-7 from the foul line. It would be hard to have a better 15-point night. Wilhelm scored 12. Taylor Conrad had seven rebounds and three steals. Colbie Perry had three steals. Lani Isley, Hannah’s older sister, had six rebounds.

“Just a very hard night, but we weren’t going to give up,” Hannah Isley said.

Next for Carson is fifth-seeded Enka (23-4) at home on Saturday. Enka was the league champion of the Western Mountain Athletic Conference. Asheville was runner-up in that league. Enka won 70-59 against Northern Guilford on Thursday.