Forward 2040 committee gets input from citizens 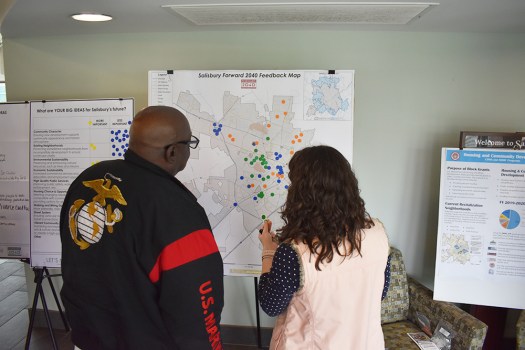 Senior Planner Catherine Garner, right, explains to David Jones how to participate in the Salisbury Forward 2040 Feedback Map. The orange dots symbolize where the area should remain the same, blue means revive and green shows where it should be revolutionized. 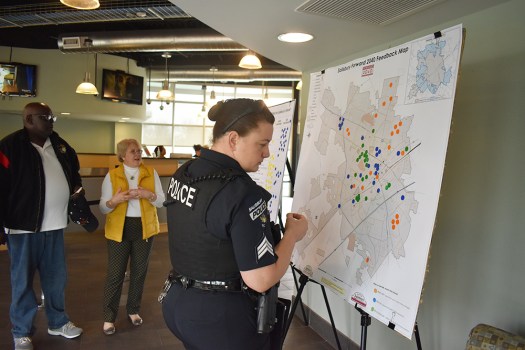 Salisbury Police officer Jennifer Moreau places dots on the map to show to identify where she thinks should remain, be revived or revolutionized at the Salisbury Customer Service Center on Wednesday morning. 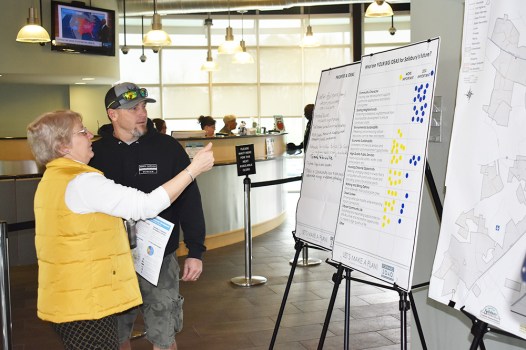 Jane Creech, a Forward 2040 Steering Committee member, tells Joseph R. Ayash to place dots on what big ideas he has for Salisbury’s future.

SALISBURY — As people came in and out of the Salisbury Customer Service Center on Wednesday morning, they shared what they hoped Salisbury would look like by 2040.

Throughout February, members of the Forward 2040 Steering Committee and city staff have solicited feedback on what ideas are important and which areas of Salisbury should stay the same or be improved. They have set up at the Salisbury Community Development Corporation office, Fire Station No. 4, Park Avenue Community Center and La Alcancia Grocery Store.

“We’re reaching out to all walks of life as much as we can to find what they think is important to have a pulse on all different areas of the community,” said Member Jane Creech.

Other-colored dots were used on a map to identify areas that should remain, be revived and be totally overhauled.

The information gathered will be used to draft Salisbury’s Comprehensive Plan that details how the city will grow over the next 20 years in public transportation, emergency services, community character, green spaces, water and sewer, quality of life, neighborhoods and sustainability.

“We want everybody to be involved,” said Senior Planner Catherine Garner. “It’s a joint effort. We all make up the community so we all need to play a role in shaping its future. The information that we are gathering now is going to directly lead to the goals and visions of the plan.”

Veteran David Jones participated in the feedback session and has lived in Salisbury for three years. Jones added having more diverse cultural events to a list of priorities and ideas.

Sarah Dunlap spoke about the city’s role in lowering the homeless population and creating opportunities for activities young people through the parks and recreation department.

Dunlap said it was “wonderful” for the city to go to its citizens and get their feedback. The city was able “to get input of everyday people who are paying their bills,” she said.

Creech said the feedback sessions allow them to reach out to more people in the community.

“I feel like today we captured people we might have missed if we hadn’t been right here,” Creech said. “These are foundation of our city. They’re here paying their bills and they’re the ones we need to hear from.”

Committee member Jonathan Behrooz said getting public feedback will guide the steering committee on its path to determine what the city wants.

The committee will continue to focus on gathering more information for the next four to six weeks.

“When we think about where we are going to be and what we’re going to do in 20 years as a community, that’s why the community feedback is so important to really say this is what we want not just what city government,” Garner said.

Citizens can continue to participate by taking an online survey at salisburync.gov/Forward2040survey. They can also host a meeting in a box, a kit for small groups to get input about what the city should look like. Citizens can request a box by calling 704-638-5320.