Braves’ Foltynewicz ready to put 2019 season behind him 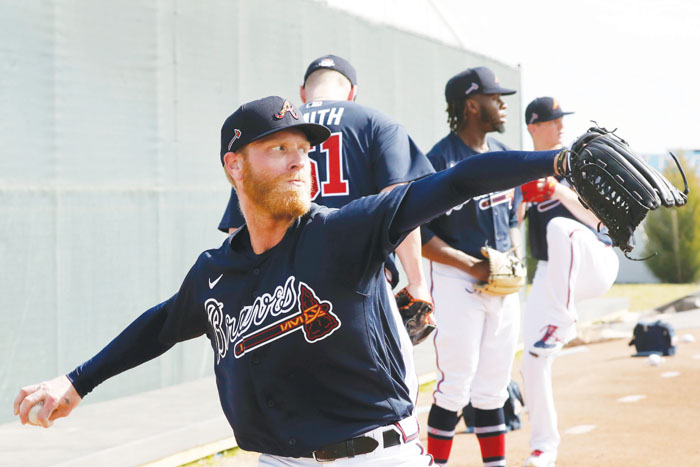 NORTH PORT, Fla. (AP) — When Mike Foltynewicz was asked how long it took him to get over his nightmarish start in Game 5 of the NL Division Series, he said “two or three days.”

The Atlanta Braves pitcher said he quickly turned his attention to wife Brittany, son Mike and daughter Lola. They not only supported the former all-star but visited when he was demoted by the Braves.

“They’re my biggest support system,” he said during spring training. “They calmed me down and relaxed me.

“You have to get over the social media – that can be pretty hard – and put that stuff away and be a dad and husband.”

The forgettable Game 5 – Foltynewicz left with a 4-0 deficit in the first inning that turned into 10-0, then a 13-1 loss – capped a roller-coaster season.

He missed most of the spring last year because of an arm injury that led to a bone spur in his right elbow and a trip to the 10-day disabled list in late March.

When he returned, Foltynewicz won six straight. He finished the regular season with an 8-6 record and lowered his ERA to 4.54.

The resurgence continued in the postseason when the 6-foot-4, 200-pound Foltynewicz threw a shutout over seven innings vs. the Cardinals in a 3-0 win. He walked none, struck out seven and had four 1-2-3 innings.

And then came Game 5.

“The reason really had its up and downs. Midseason, things went really south. I had to step up physically and mentally.”

While he said teammates, coaches and management continued to encourage him, Foltynewicz said his family visiting him while on road trips in Charlotte and Durham, North Carolina lifted his spirits.

“All this stuff is stressful and creates a lot of anxiety,” he said. “I was an all-star. When you can’t figure it out and you’re trying your hardest and not feeling right and competing against some of the guys in the world, it’s tough to have confidence. But my family and teammates were there at the end of the day.

Because Foltynewicz missed most of last spring, Braves manager Brian Snitker said he played catch up all year and it finally caught up to him.

“A healthy start is the key to having a good start,” Snitker said. “I think spring training is all about the pitchers. Position players come along before (pitchers) do. Spring training is for the starters. That’s the only reason we have all these games.”

Sharapova retires from tennis at age 32 — with…