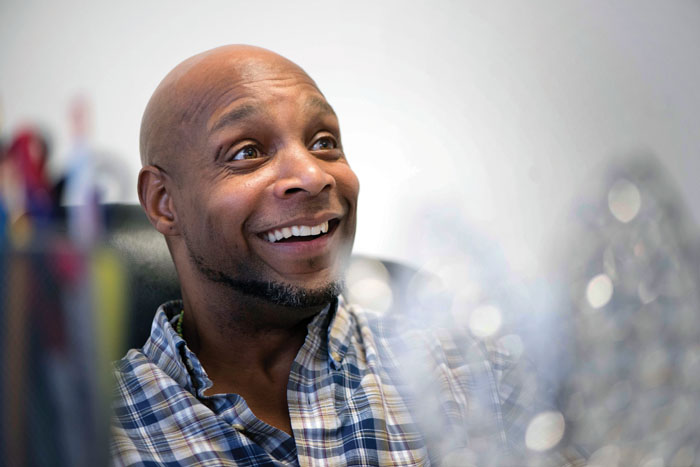 JON C. LAKEY / SALISBURY POST Alex Clark, founder of COMPASS at the non profit office on South Main Street in Salisbury. Gemstones Academy and COMPASS, are nonprofit organizations founded by Alisha Byrd and Alex Clark, with the mission of provide youth with the skills to reach their maximum potential by discovering their gifts, talents and abilities. Gemstones Academy offers their service to girls and young women where as COMPASS is offer to boys and young men. COMPASS stands for Confident, Optimistic, Motivated, Persistent, Assertive, Studious and Successful. Tuesday, April 11, 2017, in Salisbury, N.C.

SALISBURY — Family and friends are mourning the death of community leader and youth advocate Alex Clark, who died Saturday, four years after being diagnosed with Lou Gehrig’s Disease, commonly known as ALS.

Clark, 49, leaves behind a legacy for the youth he mentored and a community that’s forever changed by the purpose-driven life he lived.

ALS or amyotrophic lateral sclerosis, affects the nerve cells in the brain and degraded Clark’s ability to walk, breathe, eat and speak. He had been in the hospital for five weeks, said wife Alisha Byrd-Clark, but he continued motivating others until his last breath.

In 2015 and before they were married, the pair founded the Gemstones and COMPASS Leadership Academy, two companion nonprofits designed to provide youth with skills to reach their maximum potential by unwrapping hidden gifts, talents and abilities. COMPASS stands for Confident, Optimistic, Motivated, Persistent, Assertive, Studious and Successful. A year ago, Clark and Byrd-Clark received keys to the city for their work and dedication to youth in the community. Together, the husband and wife team have given $10,000 in scholarships since they began their nonprofit.

Clark created the clothing line Melanated Genius a few years ago, too.

A week before he died, Clark was scheduled to speak to a group of Salisbury High School students about his experiences with ALS. The students had been reading “Tuesdays with Morrie,” a book about a man who has regular visits with a former college professor who gradually dies of ALS. When Clark was admitted to the hospital, he was determined to keep his promise. Instead of being at the school with the students, he spoke via video conference from a hospital bed. After introducing the students to how ALS began as “the fight” of his life that became a “battle” and then “all-out war,” he fielded some questions.

“Are you scared of death?” one student asked.

“Well, that is inevitable. Nobody gets out alive. However, I do love living. But I know one day it will happen because of ALS,” Clark said to the students.

Byrd-Clark said her husband was at peace with dying. Clark had mentioned to his wife that it “hurt him” to live.

“He said, ‘When it hurts to live, it ain’t living,'” she recalled. “He knew there was no cure and he had accepted that fact.”

She’s comforted in knowing that he made connections with the people he encountered.

“People connected with his heart, his mind and with his spirit. It makes the grieving process so much easier,” Byrd-Clark said.

Byrd-Clark said the legacy she hopes her husband leaves behind is that he lived a purpose-driven life.

“He was true to the cause. He fought for what was right. He spoke truth. His heart was pure and he loved people,” Byrd-Clark said with a smile. “He would tell you that ‘I love people but I love my black people.'”

Byrd-Clark said her husband cared about the community, “but he cared more so about the well-being and the direction that our children are going.”

Byrd-Clark said she feels forever connected to friends that include Nick Means, Veleria Levy and Anthony Smith, among others, who became more like family and hopes they will help her continue the journey that her husband began.

“When I think of him, I think of purpose, passion and people. He knew his purpose and that was to enrich the lives of everyone he came into contact with and he did that on a daily basis,” Means said.

Means said he often found himself taking notes while talking to Clark. He has multiple pages of notes from conversations with Clark.

“There were times I would pull my phone out and press record and just record him talking,” Means said.

Means said he and Clark had a unique relationship, one where an outsider would’ve thought they’d known each other their entire lives.

“I admired his willingness to serve. I admired his strength. And I’ve never met a person as smart as him — ever in my life,” Means said.

He said Clark was intellectually astute.

“He could articulate things that would blow your mind. He was a true student of life and a true servant of people,” Means said. “No disrespect to anybody whose been working in the community, but what he accomplished in a short amount of time is absolutely amazing.”

Those who knew Clark before he was a community servant called him by his childhood nickname, Duke, but to his mother, Margaret Clark, he will always be “Kidd.” He gained the second of the two from his mom when he was a kid, but a great aunt gave him “Duke” when he was an infant.

“She would say I want to see my little Duke,” Clark’s mother said.

Clark was the oldest of three boys. He was always close to his younger brothers, she said.

She said Alex was always smart, brave and someone who would make sure all of his aunts had flowers and knew they were loved around the holidays. She had Clark at a young age and admits that her oldest son helped her “grow up.” He was born in 1970, graduated from South Rowan High School and has lived in either the China Grove or Salisbury area for most of his life.

“I would always tell them ‘can’t is not an option’ and that’s what he wanted, to help children and let them know you can do anything you want. I’m just so proud of him,” Margaret said.

Clark was never one to shy away from his past and even used his life as a lesson to the youth he mentored. A federal drug charge of which he was convicted in 1996 and served 18 years in prison, in particular, was an item he frequently cited as changing his life.

Kiera Cherry, one of the original students in Gemstones Academy, said Clark never held back.

“He gave it to me straight. He was intentional,” Cherry said. “He taught me to be trusting and how to love unconditionally. He taught me that I wasn’t necessarily afraid of heights but I was afraid of falling but it’s OK to fall as long as you get up and he provided me the tools to know that I can get up.”

Levy, whose son was a part of COMPASS, said Clark was more like an uncle than a mentor to her son. She said Clark could bring together people across political, racial and religious backgrounds.

And she noted that Clark didn’t hide behind his past mistakes.

“As someone raising a son as a single mom, I needed that. I believe our community needed that reality check,” Levy said.

Close friend Anthony Smith said Clark could converse about anything, was well-read and a bibliophile.

“We would exchange and talk about books and what we love to read,” Smith said. “He read very broadly. I don’t know if people realize he could talk about anything.”

He called Clark a griot — what West African communities called a wise storyteller.

“Alex was a mighty griot to our community who captured the stories, tales, proverbs and spiritual heritage of our community,” Smith said in a tribute post on social media.

Smith said Clark, “Helped us remember who our people were and are. Not just remember intellectually, to remember in our body in our souls, sort of a deep remembering.”

“To remember we truly are ‘melanated geniuses.’ We don’t have to accept the lie in this culture about our people and we can all choose to be extraordinary,” Smith said.

A celebration of life service will be held Sunday at Salisbury High School auditorium beginning with a 1 p.m. visitation and a 2 p.m. service.