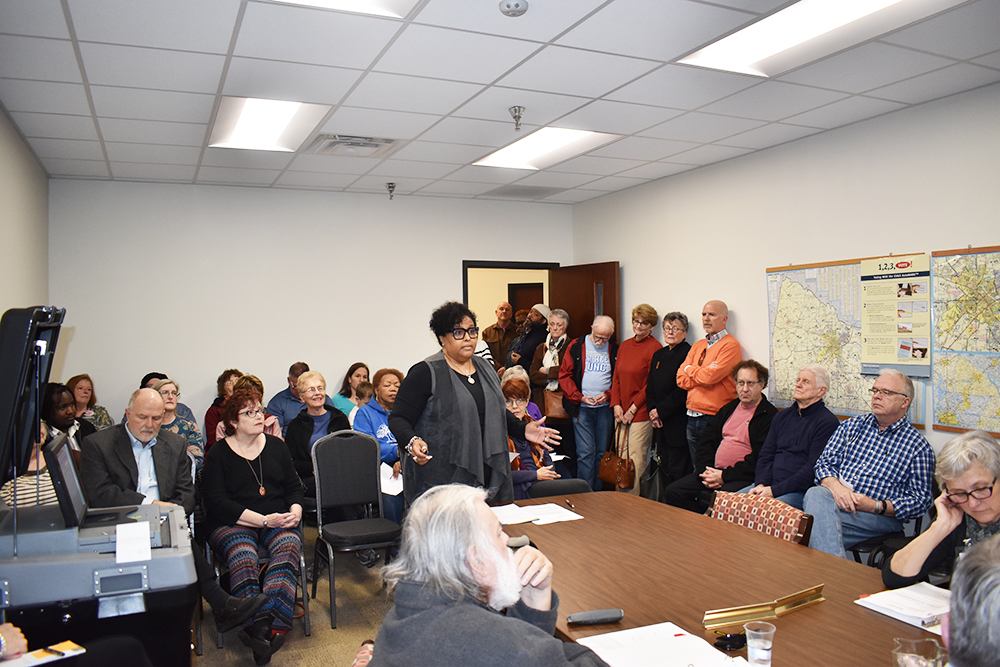 Veleria Levy talks about her work travel and balancing her son's activities as reasons to add a Sunday voting option at the standing room elections board meeting Tuesday.

The elections board decided last week to talk Tuesday, March 3, as they wait for election returns about adding a Sunday one-stop site. It’s too late to add Sunday early voting in time for the primary election.

John Doherty, a member of the public who spoke Tuesday, said democracy becomes stronger if more people vote. He said the board should accommodate every eligible person who wants to cast a ballot.

“Sunday voting helps voters to balance their work obligations, child care and other responsibilities that can deter them from voting,” Doherty said.

“Working and lower-income people, in particular, have less flexible schedules,” Doherty said. “Sunday voting has the potential to help ease these competing burdens by providing people with more choices about when they can vote.”

Mary Lumpkin, another public speaker, said those who are intimidated about the voting process can come with a group after church.

Corey Hill was also among the many speakers and said Sunday voting is historically known for assisted voting for the elderly.

“They cast that vote because we have that constitutional right,” he said.

Veleria Levy said she is often out of town for work and that her 15-year-old son is active. Her Saturdays “are shot,” she said. Those against Sunday voting simply don’t have to cast a ballot on that day.

Elaine Hewitt, again, was the only person to speak against adding the Sunday voting time. She said there were plenty of opportunities for people to vote with absentee ballots and early voting.

Donna Prunkl said, while canvassing, she met an African-American teenager. His mother wasn’t home, but she told him to encourage his mother to vote. Prunkl later returned, and the teenager shared that it was difficult for his mother to vote because she’s a medical professional and sometimes has to work on Saturday.

“I think there are a lot of women like that that are single parents who appreciate every opportunity they have to vote,” Prunkl told the board.

Anthony Smith, political action chair for the Salisbury-Rowan NAACP, said the branch is in favor of including Sunday voting. The NAACP has witnessed a rise in voter suppression and is fighting voter ID laws, closure of polling places, gerrymandered districts and reduced opportunities to vote.

“While we view the harsh history of citizens being denied the basic right to vote, let us find ourselves on the right side of history as we expand the opportunities for citizens to exercise their right to vote,” Smith said. “We, the Salisbury-Rowan NAACP, request that the Board of Elections exercise their moral compass and expand our right to Sunday voting.”

Pam Bloom, who also spoke last week in favor of the Sunday voting option, thanked the board for their willingness to listen and adding it as a discussion topic for the March 3 meeting.

“Sometimes Democratic ideals aren’t always opportune as far as timing, so I know y’all are busy and we appreciate it, but I appreciate that you heard our passion,” Bloom said. “I believe that creating accessible voting for all Rowan voters is a cause that we can all unite for.”

Man’s request to bring property up to code prompts…