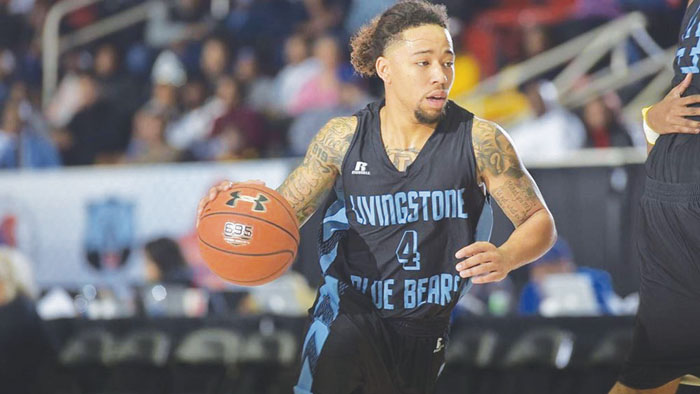 Photo courtesy of the CIAA ... Livingstone’s Roger Ray, during Wednesday’s CIAA Tournament game against Bowie State, in Charlotte. Livingstone won, 74-70, as Ray scored 22 points. Ray, a senior, is the CIAA’s Player of the Year.

The Blue Bears (13-16), snapped a six-game losing skid and takes on Winston-Salem State in a quarterfinal game at the Spectrum Center, tonight a 9:00. The Rams are the No. 2 seed out of the Southern Division, while the Blue Bears are sixth.

Bowie State ended its season with a 16-14 overall record. The Bulldogs were the No. 3 seed out of the league’s Northern Division.

“We put an entire game together for a change and executed down the stretch,” said Livingstone coach James Stinson. “We still had some flaws, like quick shots, but we’ll take a win anyway we can get one. It’s one game at a time and we’ve just go to make sure we put ourselves in the best position to compete and win.”

LC’s Cameron Carpenter canned two free throws with 3.2 seconds left to ice the game for the Blue Bears. “Cameron really stepped up to the line and made some clutch foul shots for us,” added Stinson.

Ray scored five points, including two critical buckets, during a game-deciding 12-7 run in the final 3:23 of the contest. The senior guard swished a jumper to put the Blue Bears ahead, 64-63. Ray scored again to give his team a three-point lead, and the Blue Bears never trailed again.

Lydell Elmore and Carpenter added 16 points and 12 points, respectively, for the Blue Bears, who shot 45.1 percent from the floor. The Blue Bears made 5-of-10 attempts from the 3-point arc. Navar Elmore led LC with in rebounding with eight boards.

Saiquan Jamison had 12 points and nine rebounds and Smith added 11 points for the Bulldogs, who made 40 percent of their shots. Rebounding kept the Bulldogs in the contest as they won the battle of the boards, 43-31, including a 23-12 advantage on the offensive glass — which led to second-chance points.

The lead changed hands seven times in the see-saw affair. After falling behind early, the Blue Bears took a two-point halftime lead. They opened the second half with 10 straight points to build a 49-37 lead, but it evaporated quickly as the Bulldogs made their run, pulling into a 51-51 tie with 9:49 remaining.

The lead changed three times before the Blue Bears surged ahead for good.

Ray came alive late in the first half to push the Blue Bears past the Bulldogs for a 39-37 halftime lead. Eight of his 11 first-half points came in the last seven minutes — including a four-point play on a three-pointer and foul — as the Blue Bears erased a nine-point deficit.

The trio of Elmore, Carpenter and Malik Smith each scored six points in the first half for Livingstone, which connected on 13-of-28 shots from the floor.

Juwan Smith and Jamison scored eight points apiece for the Bulldogs, who led all but the last minute of the first half. The Bulldogs held a working margin between four and nine points until the Blue Bears made its late first-half run.

“We’ve been right there with them (W-S State), but we’re still going to have come to play,” said Stinson. “They’re the No. 2 team in the Southern Division and they’ve done a great job of capitalizing on some our weaknesses. But, it’s tournament time, so we just have to go out there and see what we can do.”

Livingstone will look to Ray for another big game. He averaged 30.5 points per game in the two earlier contests against W-S State.

This season, Ray has compiled seven games with 30 or more points and 13 more with 20 or more.

Ray was voted the CIAA’s Player of the Year, despite not playing for one of the top-finishing teams. “He got the votes, out of respect, for what he’s done for four years — and the things that he has accomplished this season,” said Stinson. “And against Bowie (on Wednesday),  Roger did a good job of getting everyone else involved and putting them in the right positions. I was impressed with his leadership.”

Anthony Jeffries and Dennis Davidson contributed to this story.