Hollywood went to war and kept us distracted 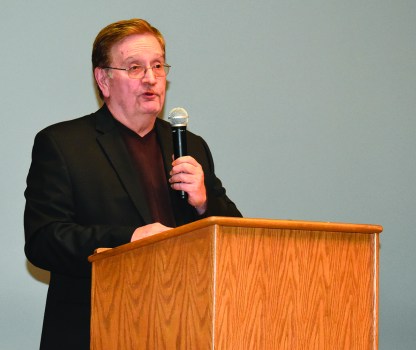 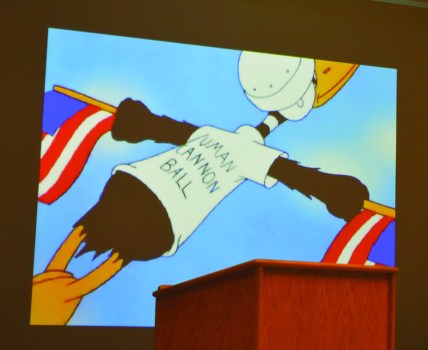 Deirdre Parker Smith/Salisbury Post Daffy Duck does his part for the war as the human cannon ball in a cartoon from the World War II era. 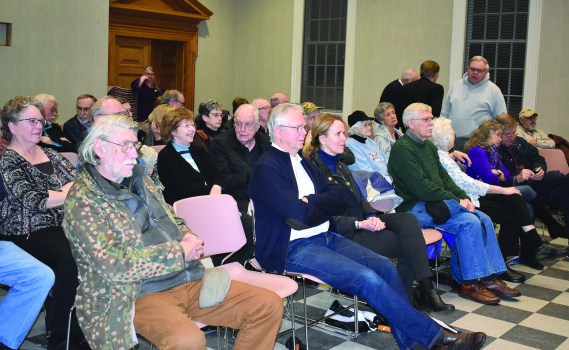 During World War II, there were three busy movie theaters in Salisbury, distracting people from their fears and providing news on film before the age of television.

Mike Cline, a movie buff and collector who has been involved in the arts and movie business in Salisbury,  presented “Hollywood Goes to War” Monday night at Rowan Public Library as part of the Victory 45 series commemorating the 75th anniversary of the end of World War II.

Hollywood went to war in a big way, producing feature films where America always won, loving looks at the home front and of course, Westerns.

Training films were made for every branch of the armed forces at the request of the military.

It was one of the best of times for Hollywood, with the average American going to the movies three times a week. For 40 cents, it was an affordable escape from anxiety.

Cline began his presentation talking about where studios were California, and how the concept of Hollywood grew and changed from the small geographic area it once defined.

Paramount and RKO Radio pictures were in Hollywood; Walt Disney was in Burbank, with Warner Brothers; MGM, the largest and most successful of the studios, was in Culver City.

Salisbury’s three movie theaters included the main one, the Capitol, at 123 W. Innes St. It closed in 1977 and is now the courtyard area next to the Salisbury Post.

The B-movie house was the State, which is now the Meroney Theatre of Piedmont Players. The State was originally a live theatre called the Meroney, then it had a variety of names as a movie theatre. This was where the second tier Hollywood stars were seen.

The third was the Victory, which was in the building now housing Griffin’s Guitars at 103 S. Main St. It was originally call Main Theater, because of its location, but was renamed Victory in 1918. It closed in 1956. It showed second run movies — movies that had been shown at the State or the Capitol first.

Major Hollywood directors were eager to be part of the war effort. John Ford and Frank Capra did military documentaries, like Ford’s “Battle of Midway” and “How to Operate Behind Enemy Lines.”

They also made the training films on hygiene and other topics.

All the Hollywood studios were part of the fight. Stars like Tyrone Power and Jimmy Stewart actually served in the military. Clark Gable was 42 when he went to war. His wife, Carole Lombard, had died in a plane crash while traveling to sell war bonds and Gable was devastated, Cline said.

Walt Disney jumped in to house 500 military troops at the studio, which was close to Lockheed aircraft company.

Disney did propaganda films, using familiar Disney characters like Mickey and Minnie Mouse, Pluto, Goofy, and others in cartoons about the war effort. Many of those films were locked away for 50 years and have only become available recently.

Cline said the one thing to remember is that ”People on the home front had no idea if their way of life would end.” They were scared. “But it pulled the country together,” he said.

Disney also made cartoons with Mickey and Minnie about how to recycle, about rationing, and Minnie was in a cartoon about saving cooking grease for the war effort.

Commercial movies like 1944’s “Since You Went Away” starring Claudette Colbert focused on the home front with a brave woman raising two daughters and waiting for her husband to return.

Humphrey Bogart starred in several of the World War II movies, most notably, “Casablanca” and “The Big Sleep,” which was first shown to members of the military. They didn’t like parts of if, and a year later, the studio rebuilt the sets, called back the stars and refilmed part of it, Cline said.

A movie showing usually included previews, cartoons, ads and a news reel before the main feature.

Many studios had a news reel department. It took at least four weeks to get film back from overseas, and then the film was produced and shown to movie-goers. Without television, they had no way to see what was happening. They listened to radio and read newspapers and magazines, but the news reels brought the war closer, gave them information they so desperately sought.

Cline remembered the days when a kid could go to the Victory all day Saturday. For 9 cents, he could see a 60-minute cowboy movie, cartoons, comedy sketches, a news reel and a movie serial with a cliff hanger every week that prompted a return to the movies the next week.

“Movie theaters were a gathering place,” Cline said. “It was a place to sell war bonds and war stamps. Some actors toured the country selling war bonds.”

In 1944, Cline said, Lon Chaney Jr. came to Salisbury for that purpose.

“At the movies, we were all together,”Cline said. “We didn’t know what was coming.” For the movie studios, war was good for business. “There’s never been a period like it.”