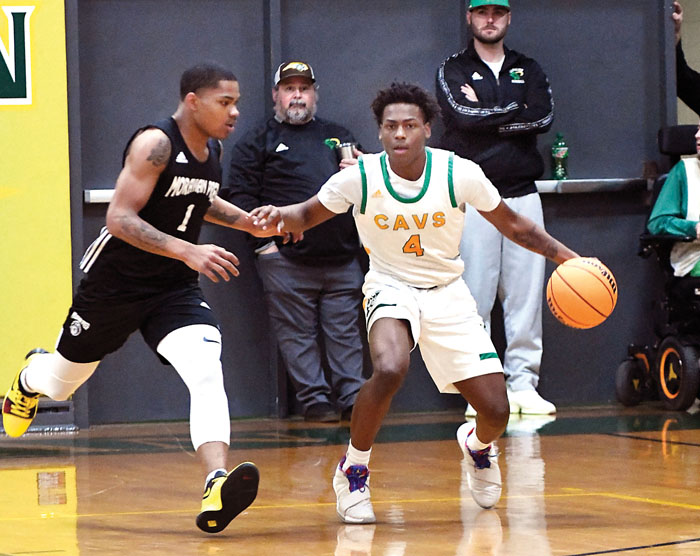 North Rowan's Quashawn Carpenter (4), shown during an earlier game, will help lead the Cavaliers against North Stokes in tonight's 1A state playoff game. ... File photo by Wayne Hinshaw, for the Salisbury Post

Five Rowan teams made it through the first round of the state playoffs.

At home tonight are the Salisbury girls, Carson girls and North Rowan boys.

The third round is set for Saturday.

Asheville won 14 conference games but finished second in the Western Mountain Athletic Conference behind Enka. Carson played the fifth-place team from that league, A.C. Reynolds, in the first round.

Asheville is high-powered. Not many girls teams average 70 points per game. Asheville wiped out Weddington 92-57 in the first round

Carson is small but averages 59 points per game and holds opponents to 38. Carson’s strengths are defense, balance and 3-point shooting.

The Eagles from Moravian Falls finished third behind Alleghany and Ashe County in a split 1A/2A league. They won at North Davidson by 12 in the first round.

Salisbury is a very young No. 1 seed, but has a good leader in senior Anayia Fulson. The Hornets rely on a defense that has held most opponents in the 30s.

The North Stokes Vikings are from Danbury. In the first round, they won 72-67 on the road at Bessemer City. Christian Shemo scored 27 points, Ben Chesnut had 18 points and 15 rebounds, and Isaac Wood scored 18.

North Rowan barely survived the first round, taking a tough decision against North Stanly on a last-second shot by Denerio Robinson.

Forest Hills is in Marshville, not far from Wingate University. There are a lot of newer schools thriving athletically in Union County, but this is one of the ones that’s been around a long time.

The Hornets have encountered the Forest Hills Yellow Jackets frequently in the playoffs, including a close loss in a monumental struggle in the regional final two years ago.

Salisbury opened the playoffs with an impressive win at Smoky Mountain, but Forest Hills has been viewed as the West’s best 2A team all season long, so this will be a challenge for the Hornets.

Forest Hills flattened Pisgah in the first round.

Alec Topper (6-foot-5) led Forest Hills in the playoff opener with 21 points and averages 17.8 per game. Mashad Hester and Jalen Huntley are other standouts.

Zay Kesler paces the scoring for Salisbury and had 13 points in the first round to lead a balanced attack.

Community School was the conference champ for the PAC 7. North Rowan easily handled Mountain Island Charter School, the fourth-place team in that league, in the first round, but this will be tougher.

North Rowan has no shortage of motivation. The Spartans of Community School knocked out North, 56-49, in the first round last season.

The main difference between the Cavs of this season and last season is the addition of freshman Kamora Cannie. She was spectacular on Tuesday with 19 points and 10 assists.

Hunter Huss, located in Gastonia, won the Big South Conference with an 11-1 record.

Huss had a 30-2 run in the first round of the playoffs, scored 34 in the second quarter and easily took care of Kings Mountain for the fourth time this season.

The Huss Huskies have four players who average double figures. Tyrese McNeal is the leading scorer, Deneil Mack led the scoring on Tuesday. Trent Ostrander (6-foot-6) has had a lot of big games in the middle. It will be a key matchup between Ostrander and A.L. Brown’s 6-foot-6 JD Glenn, who scored 22 points in a first-round win against Forestview.