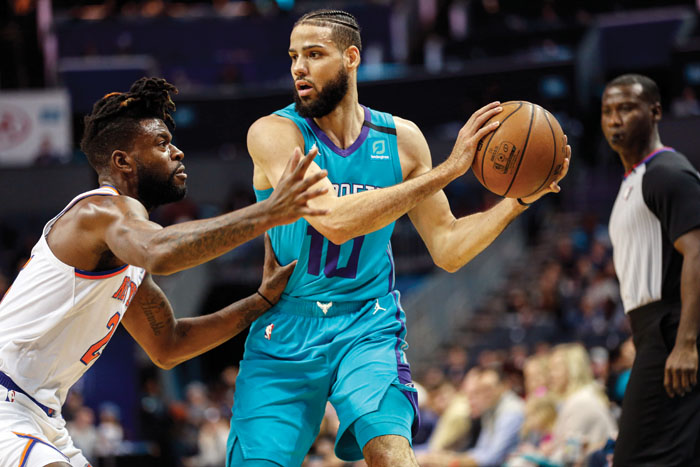 By STEVE REED AP Sports Writer
CHARLOTTE (AP) — Hornets coach James Borrego wants Devonte Graham to finish his second NBA season strong, rather than limping down the stretch.
That’s why Borrego gave Graham the night off Tuesday, in hopes that he would benefit from extra rest — physically and emotionally — during a season in which he ranks in the top 10 in the NBA in minutes played and has been a focal point of the offense.
Terry Rozier scored 26 points, Graham responded after his night off by scoring 21 points and Charlotte handed the New York Knicks their fifth straight loss 107-101 on Wednesday night. P.J. Washington and Bismack Biyombo each scored 12 points for the Hornets.
Earlier Wednesday, Hornets guard Malik Monk was suspended without pay for violating the terms of the NBA/NBPA anti-drug program. The suspension will continue until he is determined to be in full compliance with the program.
Graham said sitting out the Hornets’ loss at Indiana was tough on him because he’s a competitor, but may have been a good idea.
“I have definitely not been playing up to how I should be,” Graham said. “I think it’s just trying to get back mentally, get a little rest, recover, try and get my mind off everything and come back and compete at a high level.”
Graham didn’t get much rest during All-Star week, participating in the 3-point contest and Rising Stars game.
While he’s been a contender for the league’s most improved player, he had struggled to find his shot in recent weeks. He bounced back against the Knicks, connecting on 7 of 18 shots from the field, including two 3s.
“His usage rate has been so high that sometimes there does need to be reset,” Borrego said. “He’s played every game with high minutes. He looked much fresher mentally and physically tonight.”
Julius Randle finished with 18 points and nine rebounds for the Knicks.
The Hornets led by 15 points in the second half before Bobby Portis began to rally the Knicks with a series of mid-range jumpers. Portis had 12 points of his 17 points in the second half, but New York couldn’t get any closer than two with 2:43 remaining.
Allonzo Trier had a chance to tie the game with 1:12 remaining but missed an open look from the corner. Rozier followed with a driving reverse layup that hit near the top of the glass and bounced around the rim and in, pushing the Hornets’ lead to five with 30 seconds left.
Mitchell Robinson cut the lead to two with a dunk off a pick-and-roll, but Rozier knocked down two free throws with 17 seconds left and the Hornets held on.
“I’ll give the guys credit for the battle back and the way that they did to get back in it,” said Knicks coach Mike Miller. “But we have to understand this is a 48-minute game and you’re going to have to play both halves and you’re going to have to play every quarter. We’ve got to be a lot sharper early.”
TIP INS
Knicks: Mitchell Robinson had 12 points and 15 rebounds off the bench. … Shot 4 of 15 from 3-point range.
Hornets: James Borrego gave Cody Zeller the night off, part of what will be a rotation at center moving forward with Biyombo and Willy Hernangomez. … Miles Bridges had an incredibly athletic one-handed put-back dunk in which he seemed to levitate in the air for several seconds to grab the rebound and slam it home.
MONK SUSPENSION
Hornets coach James Borrego said guard Malik Monk has the “full support” of the Hornets organization following his suspension. Monk was averaging 18.2 points in the last seven games.
KNICKS BENCH
If there was a bright spot for the Knicks, it was the play of their bench, which outscored the Hornets 57-26.
“We just try to go out there and try to bring us back,” Portis said. “We have one job, like always: come in and just try to build the game, try to bring energy and that’s our one job.”
TRIER SEES ACTION
Trier has been buried on the Knicks depth chart all year, but had 16 points and four assists against the Hornets.
“If my number is called, I have to come in and be productive,” Trier said. “But if it’s not then I have to be supportive of my teammates, try to help in different ways, tell them what I am seeing and doing those different things.”
UP NEXT
Knicks: Visit the 76ers on Thursday night.
Hornets: At Toronto Raptors on Friday:
___
More AP NBA: https://apnews.com/NBA and https://twitter.com/AP_Sports