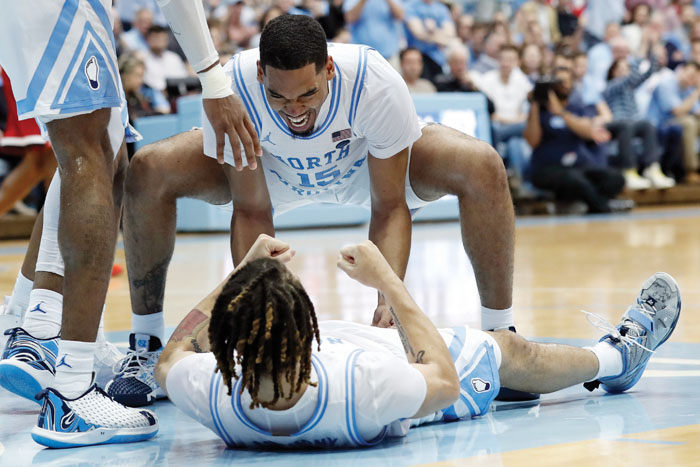 By NEIL AMATO Associated Press
CHAPEL HILL (AP) — At numerous points this season, Garrison Brooks has struggled to make free throws for North Carolina. Tuesday night, shooting free throws was like second nature for Brooks, who scored 30 points to help the Tar Heels end a seven-game losing streak with an 85-79 victory over North Carolina State.
Cole Anthony had 19 points, five rebounds and five assists and reserve Christian Keeling scored 16 points on 7-of-9 shooting for the Tar Heels (11-17, 4-13 Atlantic Coast Conference), who swept the Wolfpack in the regular season and have won 32 of the past 36 meetings.
Markell Johnson scored 21 and had 10 assists for N.C. State (17-11, 8-9).
North Carolina erased a 52-45 deficit in the second half with a 22-4 run. Five different players scored, led by Keeling, who poured in eight points in about two minutes. When Brooks completed a three-point play with 8:33 remaining, the Tar Heels had a 67-56 lead, their largest margin of the night.
In total, Brooks was 14 of 16 from the free-throw line, including 11 of 11 in the second half.
“I just shot ’em with confidence, didn’t think about ’em, and they went in,” said Brooks, who came into the game shooting 56.5% from the foul line.
In the first half, the Wolfpack hit their first four shots and forced North Carolina into five turnovers in the first eight possessions while racing to a 13-2 lead. Johnson led the charge, scoring eight points in the first 2 ½ minutes.
But he cooled off (4 of 9 at halftime), and no one could stop Brooks (13 points at halftime) inside. Four N.C. State players had two fouls at halftime. UNC shot 12 free throws, and N.C. State attempted four, a key factor in UNC’s 40-37 halftime lead.
The Tar Heels finished with 31 free-throw attempts to N.C. State’s 13.
KEY STRETCH, KEY PLAYER
The Tar Heels sealed the victory by making the right plays late, but it was the 22-4 run midway through the second half that was the difference. Keeling keyed the run, continuing a recent stretch of strong play for the Charleston Southern transfer.
“Christian made a couple of big shots,” UNC coach Roy Williams said.
Keeling scored in double figures double figures in five of the past seven games.
BIG PICTURE
N.C. State: The loss hampered the Wolfpack’s chances of making the NCAA Tournament as an at-large selection, but center DJ Funderburk remained upbeat. “Don’t let this one affect the next one,” Funderburk said of the message in the locker room. “We’ve just got to lock back in and be ready for Pitt.”
North Carolina: It’s been a season of discontent for the Tar Heels, NCAA Tournament regulars under Roy Williams. But this win was sweet because it ended a long losing streak and came against a rival. In the 17-season Williams era, UNC’s longest losing streak before this year was four games in the 2009-10 season.
UP NEXT
N.C. State: The Wolfpack plays Saturday at home against Pittsburgh.
North Carolina: The Tar Heels visit Syracuse on Saturday.
___
More AP college basketball: https://apnews.com/Collegebasketball and https://twitter.com/AP_Top25