Salisbury girls open 2A playoffs with romp over East Gaston 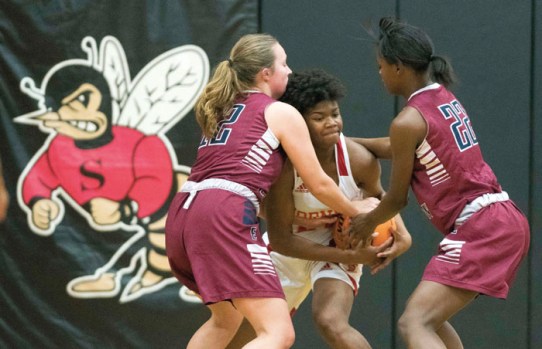 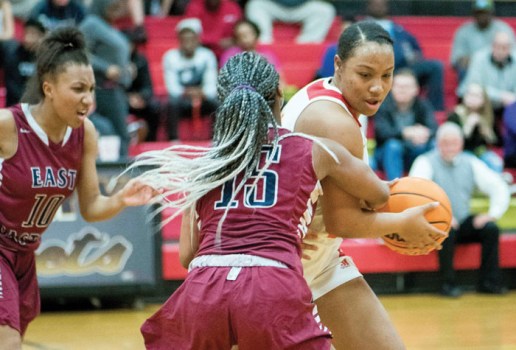 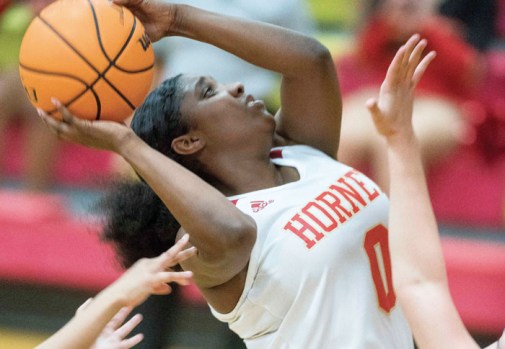 JON C. LAKEY/SALISBURY POST Salisbury's Jaleiah Gibson (0) under the basket. The Salisbury girls varsity basketball team defeated the East Gaston high team 55-33 in the opening round of the state 2A playoffs. Salisbury,North Carolina,2/25/20. 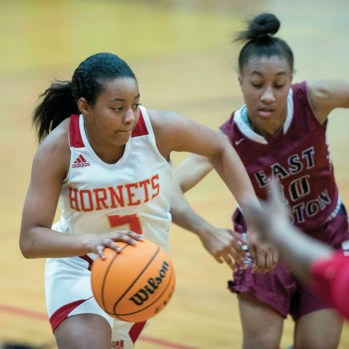 It certainly wasn’t Salisbury’s best game this season, but the No. 1-seed Hornets dispatched No. 32 East Gaston, 55-33, in the first round of the state 2A girls basketball playoffs here Tuesday night.

Even when the Warriors pulled to within six points at 27-21, three minutes into the third period, the game was never in doubt. Salisbury answered with a 10-0 run on two baskets from Kyla Bryant and one each from Jamecia Huntley, Jaleiah Gibson and Anayia Fulson.

“We played well in spurts,” said Salisbury coach Lakai Brice, who watched her team win its 18th straight game. “We had a lot of unforced turnovers early, but some of that was first-round jitters. I think we’ll come out, next game, more ready to play.”

Salisbury, now 26-1, did have 17 turnovers for the game, but its defense came to the rescue. The Hornets forced the visiting Warriors into 20 turnovers and held them to 29 percent shooting from the floor (12-of-41).

“I think our pressure did hurt them,” added Brice. “One thing we want to do is play defense. If you get stops, you can win some games in the playoffs. We did a pretty good job on defense, getting their big girls off the boards and controlling (Aneas) Price, their best player.”

Price led East Gaston with 13 points, but she made just five of 14 shots. She usually had Salisbury senior guard Anayia Fulson in her hip pocket.

Fulson, by far the leader of a team made of mostly freshmen and sophomores, had several steals, two blocks, five rebounds and numerous assists. She also scored 11 points.

Fulson’s steal and layup early in the contest erased East Gaston’s last lead at 4-3. She followed that up with a 3-pointer and the Hornets led, 8-4, and really never looked back.

Salisbury was ahead at halftime, 25-16, and extended the advantage with a 30-17 second half.

“I have to lead our team where we need to be,” said Fulson, “I’m going to take them as far as I can take them. We knew they (East Gaston) would fight. It’s the playoffs, so everybody is going to come in hard against us.”

Sophomore guard Rachel McCullough also sparked the Hornets early, with three first-half 3-pointers. She added another one in the second half and scored 14 points for the game.

Bryant, a freshman guard, started slow, but equaled McCullough’s 14 points — 11 in the second half. She got behind the Warriors’ defense several times, and Fulson hit her, in stride, with some long passes.

“When I get a rebound, my teammates know to just take off, because I’m going to get the basketball to them,” added Fulson.

Huntley, another freshman and a 5-10 post player, was a force, especially early in the game. She had seven of her 10 rebounds in the first half, to go along with two blocks and two steals. Huntley excited the home crowd with a blocked shot, rebound and coast-to-coast layup — all one play.

“Rebounding … you’ve got to want it, it’s all heart,” said Huntley. “It gets the team going. I like giving off energy, so my teammates can knock down shots.”

East Gaston trailed, 39-25, after three quarters, and if the Warriors had any hopes of a major upset, the Hornets squashed those thoughts quickly.

Salisbury opened the fourth period with a 12-3 run, taking the steam out of the Warriors and going up, 51-28. Both teams cleared their benches not long after that.

Salisbury had decent shooting percentages, making up for its turnovers. The Hornets shot 47 percent (21-of-45) from the field, 43 percent from behind the 3-point arc (6-of-14) and made 7-of-9 free throws.

“We still have a lot of work to do, but if keep on communicating, executing and listening to our coach, I think we can go far,” said McCullough. “We had some first-round jitters, but we’ll be ready for the second round.”

NOTES: Salisbury plays at home again on Thursday in the second round, taking on Wilkes Central, a solid 17th seed with a 19-6 record. … Wilkes Central defeated North Davidson on Tuesday night. … East Gaston ends the season at 14-12. … Makayla Boyd had a game-high 12 rebounds for the Warriors. … Gibson was also a force inside, grabbing five boards for Salisbury.