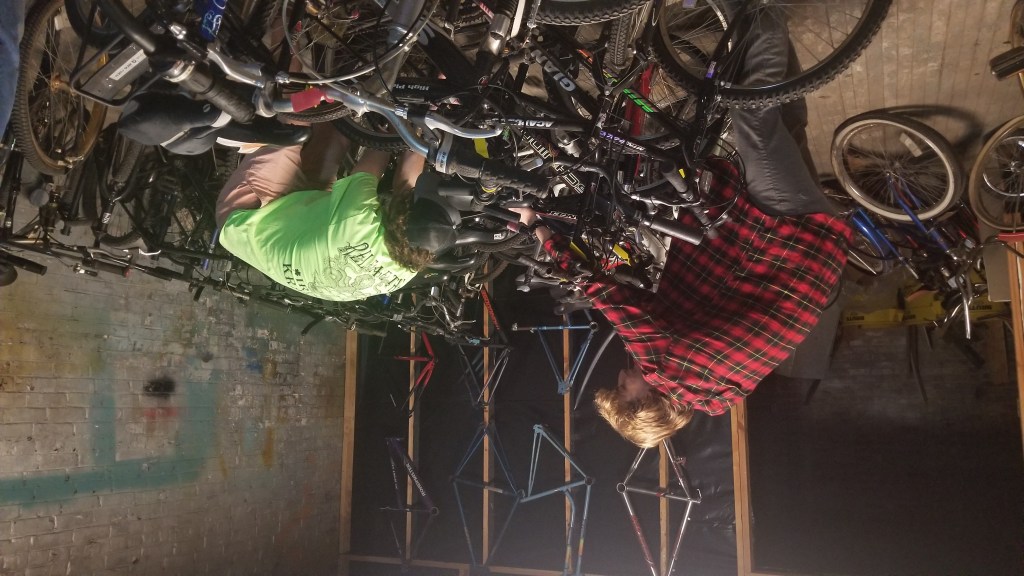 Catawba students Dustin Sink and Cody Stultz installing a kickstand on a bike. A small group of students volunteered at the shop on Monday afternoon.

SALISBURY – The Pedal Factory is a means for anyone in the community to get a bicycle if they work for it, and now it’s a place to learn bike safety, too.

Community members can come get their own bike if they come work at the shop for a few hours via the nonprofit’s Earn-A-Bike program, but just giving someone a bike does not mean they know how to ride safely on roads.

“We’ve never made that a requirement before, but I’ve just noticed a lot of people, they desperately want a bike for lots of reasons, usually its transportation related, but they haven’t been on a bike in a long time and they’re not always safe,” said Director Mary Rosser.

Rosser said there are traffic accidents even involving people who are accomplished cyclists that know how to ride in traffic.

Rosser said inexperienced cyclists may travel on sidewalks because they feel safe there, but it is not how they are supposed to ride.

There are cycling safety sessions once a month at the shop, but Rosser said she will take a one-on-one trip around town with the client to show them the ropes if someone gets a new ride through Earn-A-Bike.

A small group of Catawba College students were volunteering at the shop on Monday afternoon, organizing bikes on the top floor of the shop, which is full of bikes and bike parts laid out all along the floor.

As part of that process, students were putting kickstands on rows of bikes to keep them standing and taking up less floor space.

Sophomore environmental science major Dustin Sink said he and another student enjoyed coming out the last time the volunteer at the shop and it is a fun way to give back.

“We’re doing a bit of everything,” Sink said.

Rosser said the shop is open every Wednesday and people can come volunteer during that time, but that time is mainly used for people making repairs or doing Earn-A-Bike program. Groups like the students do not come by that often.

“Not often enough, that’s for sure,” Rosser said.

The shop is located at 311 E. Council Street. Its website is thepedalfactory.org.