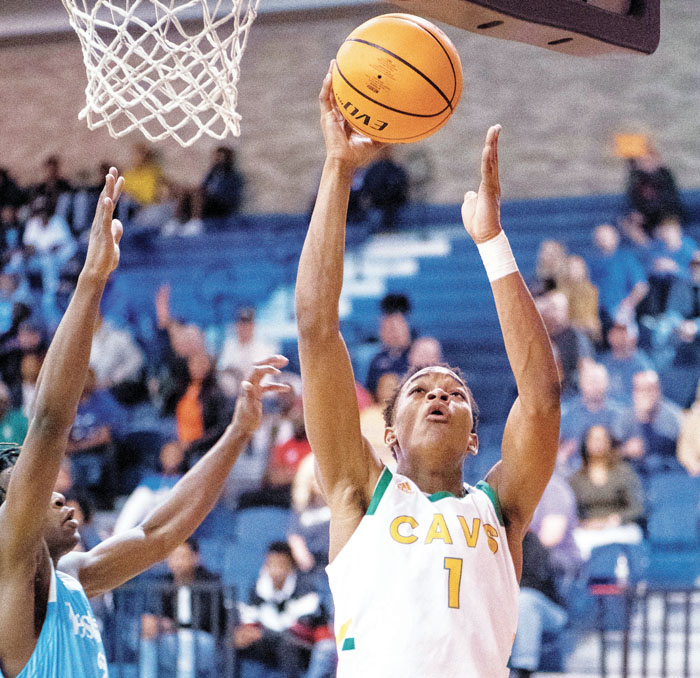 SPENCER — North Rowan senior captain Denerio Robinson is a long, 6-foot-5 athlete who has worked diligently to make himself a shooter.

All those hours of hoisting shots at the YMCA and in a quiet North gym paid off for Robinson and the Cavaliers. His 3-pointer from the right wing, in front of the North Rowan bench, swished with less than 2 seconds left on Tuesday and gave the Cavaliers a thrilling 70-67 victory against league rival North Stanly in the first round of the 1A state playoffs.

“No one works harder than Denerio,” North head coach Jason Causby said. “No one deserves a moment like that more than he does.”

Causby groaned when the pairings and brackets were released for the 1A West on Sunday. He certainly didn’t want to see the North Stanly Comets for the third time. Fourth in the Yadkin Valley Conference, the Comets had gone 0-7 against the top three — North Rowan, Chatham Central and South Stanly — but a number of those games had gone down to the final minute.

“We knew this was going to be hard,” Causby said. “North Stanly is very good, better than people realize. We know them well, but they also know us well. We never doubted it was going to be a fight. That third time is never easy.”

One reason it wasn’t routine was that T’ziah Quarles had an amazing game for North Stanly. Sometimes he doesn’t score. He had a 24-point game, including 19 in a torrid first half.

“That’s a guy we play for the drive, and we give him some room to shoot,” Robinson said. “But tonight he was making everything.”

North Stanly coach George Walker’s club was giving up a lot of inches to the Cavaliers, but the Comets did a stellar job defending 6-foot-10 Brandon White. They made White shoot jumpers and half-hooks from 10 to 12 feet. He didn’t get many layup/dunk opportunities.

Still, seventh-seeded North Rowan (21-7) started so crisply that it looked like the 26th-seeded Comets (14-12) might be blown away. Robinson was scoring from all over, James Gladden was providing energy, and the Cavaliers went up 24-12 after a quarter.

North Rowan led by 14 almost midway though the second quarter after a Quashawn Carpenter 3-pointer, but that’s when the Comets dug in.

“Quarles was hot, and we were trying to make adjustments to him,” Causby said. “Then (Koby) Poole got going, and they get a lot of their energy from him. Plus, we had three of our better defenders on the bench with two fouls and we weren’t willing to put them back in.”

North Stanly outscored the Cavaliers 11-2 to close the first half and trailed 41-37 at the break.

North Stanly took confidence and momentum to the second half, caught up and even took the lead at 47-46 at the 4:32 mark in the third quarter. But Carpenter’s fourth 3-ball put North Rowan back on top, and then Zay Davis, a mind-blowing athlete when he gets it rolling, took over for a few minutes. North Rowan surged in front 63-54 heading to the final quarter.

North Rowan was ice-cold throughout the fourth quarter, while Poole and Clay Hatley were getting it done for North Stanly.

With 1:38 left, the constantly attacking Poole got two more points, and the Comets led 67-65.

Carpenter missed a 3-pointer, but Robinson was there for the tying stick-back with 1:25 on the clock.

The teams traded missed opportunities. Then the Comets’ Chamar Watkins was fouled at the hoop. He shot two free throws. He missed both.

“We were fortunate that he missed, and that set the stage for our last possession,” Causby said.

There was nearly a minute left, but North Stanly sat back in a zone, and North Rowan dribbled and waited. It was clear the Cavaliers were willing to play for the last shot. They’d either make it and win or miss it and go to overtime.

North had a 1-3-1 offensive alignment against the Comets’ 2-3 zone. The plan was to get the ball to the foul-line area to Brandon Jefferson, a large, tall man who can see the court and generally makes good decisions and good passes. When Jefferson caught the ball with about 5 seconds left, he was going toward the hoop. He had an angle to drive and shoot on the move, but he was exploring other options. White was covered, but Robinson was clear.

“When Brandon Jefferson got the ball I thought he was going to kick it out to Carpenter, because he’s our best shooter,” Robinson said. “But we’re coached to find the open spot, to move to the open spot, and that’s what I did.”

Jefferson got Robinson the ball. He had a clean look.

Causby saw Robinson catch it and step into his shooting motion, but then his view of the shot was obscured by the referee who stepped between them. But he didn’t have to see the shot. The roar of the crowd told him that Robinson had delivered and the game was won.

“I’ve been getting up a lot of shots,” Robinson said. “I took that last one with a lot of confidence.”

Poole helped out Charles with 16 for North Stanly, while Hatley had 13.