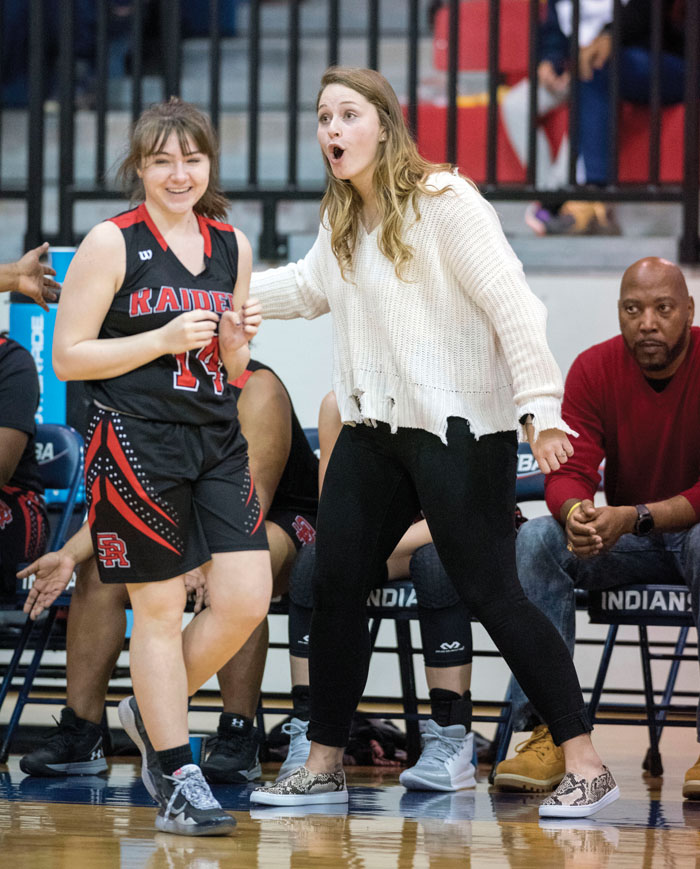 SALISBURY — South Rowan senior Madison McGuire, who is 5-foot-6 and doesn’t jump out of the gym, pulled down 16 rebounds in the Feb. 7 Central Carolina Conference at Lexington.

South still lost, but McGuire showed how much she’s grown this season, not in inches, but in being a well-rounded basketball player.

She mostly was a spot-up shooter in previous seasons, waiting at the 3-point line for Janiya Downs, who is now a freshman at Catawba, to drive, draw a double-team, a triple-team or maybe a quadruple-team, and kick the ball out to her.

McGuire actually scored more points as a junior when she made 40 3-pointers than she did as a senior, but her assists went up this season and she doubled her rebounding total.

“She actually led our team in rebounding,” South’s first-year coach Alex Allen said. “She surprised people. I’m pretty sure she surprised herself. We asked her to play in the post against a lot bigger people, and she did that. She made sacrifices for her team, and she always helped us. Even if she wasn’t scoring, she made her presence felt on defense.”

It was a grinding season for the Raiders — 4-21. And there can’t be any tougher way to end any season than to play Salisbury (24-1) back-to-back. The Raiders did that. They lost 67-31 to finish the regular season at home and 68-31 in the first round of the CCC tournament at Salisbury.

Allen, who scored 1,149 points for South’s neighbor, Carson, was still a student-athlete at University of Lynchburg at this time a year ago. Being a rookie English teacher figured to provide enough adjustments and challenges for a 22-year-old to handle. Allen loves basketball and expected to be an assistant coach during her first year as a teacher, to learn the ropes and to ease into things. But when Stacy Ellis, who piloted the Raiders last season, decided not to return, Allen was the best option. She was offered the head job in August. She didn’t hesitate. She took it on.

“She’s a younger coach, someone who was still playing last season,” South sophomore Bethany Rymer said. “But I think a younger coach was a good fit for this team. We were really young, so the girls who did have some experience tried to be role models for the freshmen.”

It seemed like a dream when South won its second outing, on the road at East Davidson, a perennial power in the CCC, but no one knew then how far down East Davidson was. East Davidson wouldn’t win any.

It took a month before South won for the second time, beating Davie County in a Christmas tournament consolation game. That led to the team’s only two-game winning streak. South came out of the Christmas tournament feeling good and won at Lexington, its best victory of the season. McGuire made three 3-pointers in that one.

South edged East Davidson at home in mid-January for its fourth win. The Raiders dropped their last nine.

“Obviously, it wasn’t good in terms of wins and losses, but young players aren’t going to be perfect,” Allen said. “When I look at our program and I see how much girls improved from start to finish, the way I look at it, that’s a win.”

Allen’s high school coach, Brooke Stouder, wasn’t much older than Allen when she became Carson’s first head coach for the 2006-07 season. Carson was 1-22 in her debut and was 4-67 after three seasons.

But Stouder stayed with it, and Carson stayed with her. She now leads a model program that wins with consistency and with class.

She’s had plenty of veteran advice for Allen this season.

Small victories like the continued development of Rymer, who averaged 14 points as a sophomore. Or the improvement of juniors Carlie Moore and Paige Chabala and freshmen starters Madilyn Cherry and Mackenzie Chabala.

Aleyana Littlejohn and Akira Harrington, seniors who didn’t play a lot, still had an enjoyable final season of basketball. That’s a small victory. Harrington scored five points in her last game against Salisbury, and there are a lot of standouts who didn’t score five against the Hornets.

Then there was night that McGuire, who averaged 2.5 rebounds last season, got 16. Now that’s worth celebrating.

“We competed every night,” said McGuire a cross country/basketball/softball athlete who will be a regular student at UNC next fall. “We never quit no matter what the score was. That’s important. That’s a goal. It’s important to know you didn’t quit.”

The losses may have piled up, but Allen never panicked or blew a fuse.

“The thing about Alex is that she’s the most level-headed and realistic person I know, and her assistant (former Carson standout Sarrah Holman) is the same way,” Stouder said. “You can’t ride every up and down over the course of a season, and she doesn’t. She stays even-keel.”

Allen says a season with losing streaks was a unique experience for her because she played on two teams at Carson that won more than 20.

She says she built relationships with players and got to know their expectations. She also let them know the expectations she had for them.

At the end of the day, high-school coaching is mostly about building relationships, not winning games. All things considered, Allen insists it was a “fun first season.”

In South’s final game, the Raiders were down by scores of 16-0 and 23-2 against Salisbury. They only got off a couple of shots in the first six minutes. If they were ever going to quit, that was their chance, but they kept playing.

“We kept competing and that’s all you can ever ask from your team,” Allen said. “This was far from a lost season for me. This was a learning experience, and we’ll have a lot of people returning. We’ll keep progressing until we’re a team to be reckoned with.”