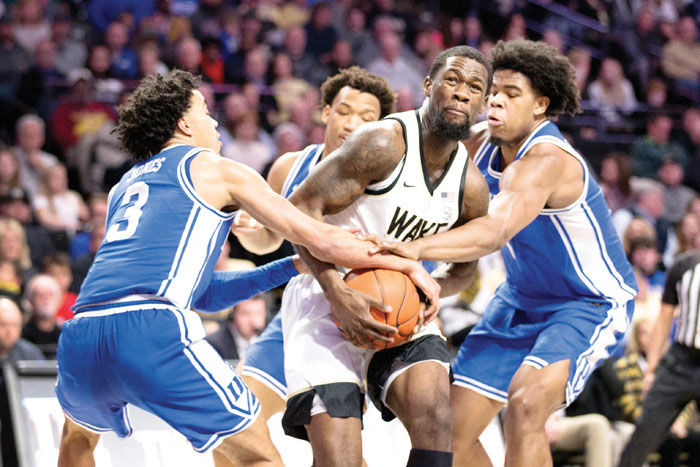 Childress missed his first 10 shots before hitting the tying 3 with 15.5 seconds left in regulation. And once the game went into a second extra period, Childress buried another on the first possession to put the Demon Deacons (12-15, 5-12 Atlantic Coast Conference) ahead to stay, sending them to their first win against the Blue Devils in nearly six years.

He finished with 17 points, five rebounds and five assists. Childress made six of his last 10 shots and scored 13 points in the two overtimes. Isaiah Mucius came up with a dunk with 14.7 seconds left to finally punctuate a huge victory for Danny Manning’s club.

“I don’t care about percentages,” Childress said of his 0-for-10 start. “I’m satisfied with the shots I take. I practice those. It might not have went as much as I’d like to. But I just wanted to find the right moment to take over the game, and I did that.”

When it was over, Wake Forest fans stormed the court to celebrate their first win against Duke since March 2014. Childress got carried around the court on shoulders.

“The second overtime, they just took over,” Duke coach Mike Krzyzewski said. “Obviously the total game, they were the team that was deserving of winning, and they did.”

It marked the second time in a week the Blue Devils (23-5, 13-4) lost on the road to an unranked, instate opponent. They lost by 22 points at North Carolina State last week, a game that ended with another court-storming celebration.

Freshman Wendell Moore Jr. had a season-high 25 points to lead the Blue Devils, and Tre Jones added 24 points, seven rebounds and nine assists at the point. But star big man Vernon Carey Jr. had 10 points before becoming one of three Blue Devils to foul out in a game they appeared to have under control, leading 78-69 with 1:21 left in regulation.

A few turnovers opened the door, just enough for Childress and the Demon Deacons to jump through.

Olivier Sarr scored a career-high 25 points before fouling out to lead Wake Forest, which shot 52% from the game and helped itself by getting to the line repeatedly. The Demon Deacons made 37 of 50 free throws, including 13 of 15 in the overtimes to finally wrestle control.

Duke: It’s a costly loss for the Blue Devils, who fell a game behind league-leading and sixth-ranked Florida State in the ACC standings with three games to play.

Wake Forest: The Demon Deacons had lost four of five coming in, sitting a game ahead of last-place North Carolina in the ACC. Now they have a huge win, ending an 11-game skid against the Blue Devils.