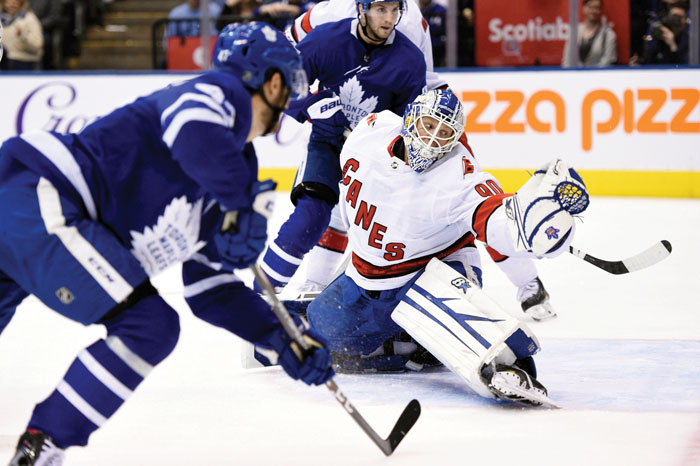 RALEIGH (AP) — David Ayres is still adjusting to new-found stardom after winning a game as the emergency goaltender for the Carolina Hurricanes.

The 42-year-old Zamboni driver and kidney-transplant recipient has been making the rounds on TV shows and radio interviews since earning Saturday’s unlikely win at Toronto following injuries to the Hurricanes’ top two goalies. Now he’s here to provide Carolina with another boost by cranking the pregame siren to fire up fans before Tuesday’s visit from Dallas, part of a day that included being honored by the Raleigh mayor and North Carolina governor.

“It hasn’t stopped since I got off the ice,” Ayres said Tuesday at a news conference alongside his wife, Sarah. “It’s a good time for sure.”

Ayres said he would watch videos of people sounding the siren to prepare.

“Everyone has said this siren thing, it’s really huge and really loud and everyone gets crazy, so I can’t wait,” Ayres said. “This is going to be so much fun. I just hope I’m doing it right.”

Well, in the eyes of Hurricanes fans, he probably can do no wrong, anyway. Not after he skated into the net Saturday night for a team jostling for playoff position in the Eastern Conference as the local on-call goaltender, then finished with eight saves in the 6-3 win against the Maple Leafs.

That made him the oldest goalie in NHL history to win his regular-season debut, while Ayres’ stick was sent to the Hockey Hall of Fame.

In the days since, Ayres has been featured on the “Today” morning show as well as Stephen Colbert’s late-night show, which included a joke of Ayres running on to relieve Colbert after the host injured his hamstring.

By Tuesday morning, Gov. Roy Cooper had issued a proclamation declaring Ayres as an “honorary North Carolinian” while the City of Raleigh had its own proclamation that it was “David Ayres Day” in the state’s capital city.

“Good for him,” Hurricanes veteran Justin Williams said Monday of Ayres’ sudden fame. “I’m proud, and I hope everything that comes his way is positive. He gets a great story out of this because it is one.”

There were also plenty of fans stopping at the PNC Arena store to buy shirts featuring Ayres’ name and No. 90 jersey number on the back. The team has said Ayres is set to receive royalties from the shirt, while a portion of proceeds will go to the National Kidney Foundation’s Carolinas Division.

Ayres also has received some paid sponsorship opportunities and could even receive a playoff share if the Hurricanes reach the postseason, though that hasn’t been discussed by the team in detail.

Ayres said he’s “definitely going to be a lifetime fan” of the Hurricanes, even as he plans to be back in Canada as the emergency goaltender for Saturday’s Vancouver-Toronto game. He’s also eager to settle back into a normal routine.

“We kind of live our lives just low key and go about it with family and friends and stuff like that,” Ayres said, adding: “I didn’t ever think it would be like this. I’m not really complaining about it, but it’s not something I would want to do” daily.

“Like the A-listers, I don’t know how the celebrities and even the hockey players that have people following them all over the place — it can’t be easy, that’s for sure.”