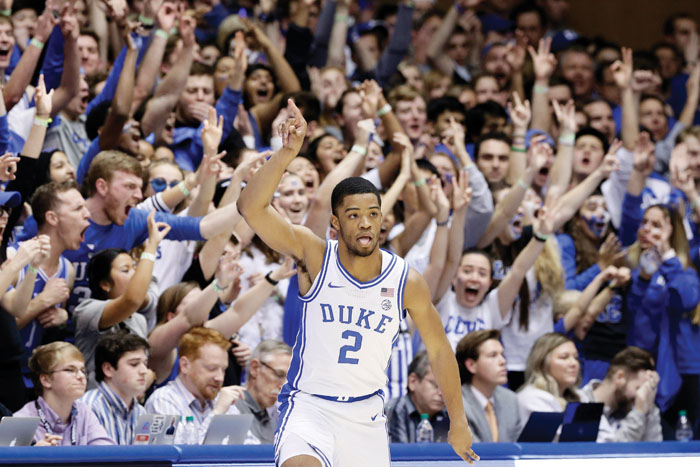 DURHAM (AP) — Duke’s energy was back. Not surprisingly, so was its dominance.
Cassius Stanley scored 21 points and made a season-high five 3-pointers to help No. 6 Duke beat Virginia Tech 88-64 on Saturday night.
Matthew Hurt added 16 points and a season-high 10 rebounds for the Blue Devils (23-4, 13-3 Atlantic Coast Conference), who bounced back from an 88-66 loss at North Carolina State on Wednesday night.
“I think we grew as a group this week,” Duke coach Mike Krzyzewski said. “Sometimes you need to get punched and knocked out, but then you get up and figure out why you get knocked out. That’s what we did.”
Krzyzewski showed his players video evidence of their lackluster effort and energy against the Wolfpack, and they responded with a strong practice Thursday. The intensity carried over into the game, which the Blue Devils seized control of from the opening tip.
Duke began with an 11-2 spurt that featured three 3-pointers in the first three minutes. The Blue Devils scored on 10 of their first 12 possessions and later delivered a 19-4 run on their way to a 51-25 lead at halftime.
“They blitzed us early and often,” Virginia Tech coach Mike Young said. “They were better, obviously. They were that good.”
Vernon Carey Jr. scored 16 points and Tre Jones had 14 points for Duke, which improved to 21-1 all time at home against the Hokies.
Tyrece Radford scored 16 points to lead Virginia Tech (15-12, 6-10), which shot 37% from the field. Isaiah Wilkins added 11 points, and Hunter Cattoor had all 10 of his points in the second half for the Hokies.
Landers Nolley II, who entered the game averaging a team-best 17.3 points and 6.3 rebounds, had three points and one rebound for Virginia Tech.
BIG PICTURE
Virginia Tech: The Hokies continued their slide. They were one of college basketball’s feel-good stories early on with a win over Michigan State and then seven victories in an eight-game stretch through mid-January, but they have dropped eight of 10 games since then.
Duke: The Blue Devils won for the eighth time in nine games, remaining a half game behind No. 11 Louisville for first place in the ACC. Their response to the blowout at N.C. State was impressive and emphatic. “We were angry,” Krzyzewski said. “I was angry at them. But in order to change, you have to be angry at yourself. They took responsibility right away.”
STAR WATCH
Stanley had made just 6 of 29 3-point attempts in his previous eight games, not making more than one 3-pointer in any game during that span. He made his first four 3-point tries against the Hokies, all in the game’s first 15 minutes, taking advantage of a defense that was preoccupied with Carey inside.
“We knew from the first time we played them that they were going to leave us open and double- and triple-team Vernon,” Stanley said.
QUICK COMPARE
The game featured the top two freshman scorers in the ACC in Carey and Nolley. Carey made 4 of 8 shots from the floor and grabbed nine rebounds, but Nolley was just 1 of 8 and sat out the game’s final 15 minutes.
Nolley has made just 8 of 44 shots (18%), including 2 of 17 3-point attempts, in the last three games.
“Nobody wants to come out of it as much as he does,” Young said. “We need him to. But we’ll hang in there with him and continue to shoot before and after practice. He’ll come out of it.”
TAP-INS
Duke improved to 1,000-226 as a ranked team under Krzyzewski. … The Blue Devils started 5 of 6 from 3-point range after making 4 of 17 3-pointers in their loss at N.C. State. … Nolley went scoreless in the first half on 0-of-5 shooting.
UP NEXT
Virginia Tech: Virginia, which beat the Hokies 65-39 on Jan. 4, visits Virginia Tech on Wednesday night.
Duke: The Blue Devils travel on Tuesday night to Wake Forest, a team they beat 90-59 on Jan. 11.