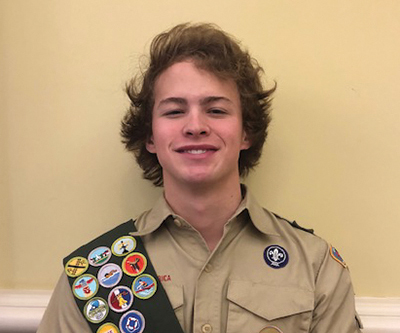 Graham Frazier Smith, 18, received his Eagle Scout award on Sunday, February 2, 2020, at First United Methodist Church of Salisbury.  The award was presented by his Scoutmaster, David B. Wilson.

Graham earned 21 merit badges.  He completed the Introduction to Leadership Skills for Troops and National Youth Leadership Training courses and served Troop 442 as a Patrol Leader.  He completed two 50-Miler awards, one for canoeing, as well as one for backpacking at Philmont Scout Ranch in New Mexico.  Along with other members of Troop 442, he participated in a National Public Lands Day project for several years, cleaning trash from the Yadkin River.

A senior at Salisbury High School, Graham is a member of Junior Civitan and was on the baseball and football teams.  Graham is a member of First Presbyterian Church of Salisbury, where he is active in the youth program and Teens with a Mission, through which he has helped build two homes for families in Mexico.
For his Eagle Scout leadership service project, Graham led a team of volunteers in fund raising efforts and permanent placement of four picnic tables and two trash cans in Centennial Park in Salisbury, and improved the overall landscaping of the park.

Graham is the son of Blaine and Andrea Smith of Salisbury.