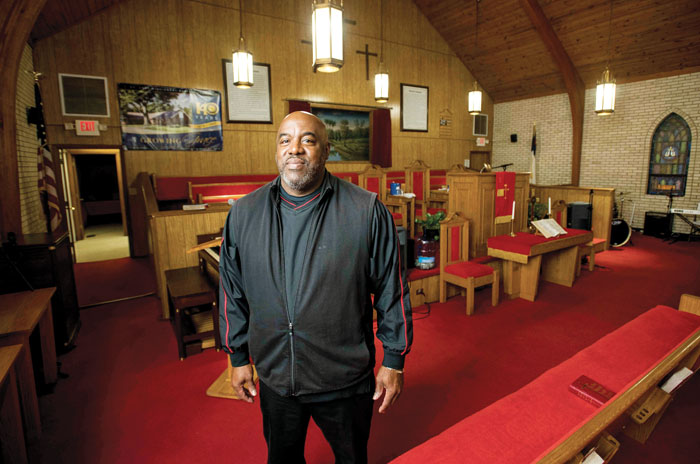 JON C. LAKEY/SALISBURY POST James Greene is a deacon at St. Luke Baptist Church on Hawkinstown Road. Greene was one of the first, if not the first, black probation officers in the county

SALISBURY — In 1984, not long after James Greene graduated from N.C. State University, he became a Rowan County probation and parole officer at a time where there weren’t many people like him working there.

Greene, a native of Mount Gilead, was one of the first, if not the first black probation officer in the county. He majored in sociology and was part of a family that found honor in serving others. He minored in criminal justice.

He grew up seeing his grandmother and parents working in the community and in the church.

He is currently a life coach at the Community Care Clinic and a deacon at his church, St. Luke Baptist Church, on Hawkinstown Road, where he’s served for nearly 20 years. All together, Greene has been a member of the church for 24 years. Nell Rose and Lois Bradley, sisters who cleaned the courthouse, encouraged a young James Greene to attend the church.

As a life coach, he works to find the clients needed resources, much like his years as a probation officer.

He graduated in August 1984 and after applying for a job with the state, a position opened in Rowan County. Greene, 18 at the time, had never been to Rowan County.

“It was more of my foundation — things just kind of pull you to where you need to be sometimes when you don’t realize exactly where you needed to be,” he said.

Initially, he wanted to work in the forestry service. That was until he saw the extensive curriculum and changed his mind.

He became licensed and certified as a probation and parole officer, where he worked his entire career in Rowan County from 1984 to 2003. There were others who had issues with working with Greene because of his race.

“I would go to lunch and I would come back and there were things left on my desk. I’d have some paraphernalia on my desk … KKK,” Greene said.

Greene had grown up in a community that didn’t see race as an issue and he didn’t even know what KKK stood for, but he soon learned.

“I really had no idea of what racism looked like. I just wasn’t brought up that way,” he said.

The discrimination that he received through his job and prejudice he encountered in the community helped him grow up, Greene said.

Prior to joining the probation staff and when others found out he’d be joining the team, Greene said department heads prepared his future co-workers for what would it would be like to have him work there. He recalled riding to church on a Sunday morning and passing by a Klu Klux Klan rally in Granite Quarry.

“I saw a couple of the gentlemen that I had on probation. When they came in the office Monday morning, they said, ‘Mr. Greene, didn’t I see you yesterday?’ I said, ‘Yeah. I thought that was you,'” he recalled.

Greene said he had a special relationship with his parolees.

“It was just a relationship and some of those guys now are some of my very best friends. I’ve always been the kind of person not to judge but just to link up with the community and try to make it stronger,” Greene.

After his time helping parolees, Greene received a suggestion from a judge who thought his social work degree could be better suited to working with youth.

“He told me that time, I’m sure he was kidding, but he told me I need to get in the school system so I can help someone that would listen to me,” Greene said.

Even if the judge was joking, Greene took his words to heart and became a girl’s basketball coach at South Rowan High School in 1996. Greene said he thought about the youth he could keep from going along the path of the adults he’d been serving as a parole officer.

In his role as a probation officer, Greene helped parolees make connections with jobs and other resources they may not have been able to find on their own to help make their lives better. One of his first tasks at South Rowan High was working with drop out prevention.

Greene jokes that he lost his hair working as a girl’s basketball coach, but he continued worked there until 2003. He was also an assistant coach for the football team.

Greene broke color barriers over 35 years ago and now says conversation is the obstacle to being racially harmonious in the workplace and elsewhere.

Greene said it’s going to take having, “an out-of-the-box conversation about racism because it’s a thing that really has to be addressed because it is in the foundation of America. It is in us. It is in our households. So, it is something we are going to have to be open and discuss because it affects so many things.”