Fury wins in stunning stoppage of Wilder in heavyweight tilt 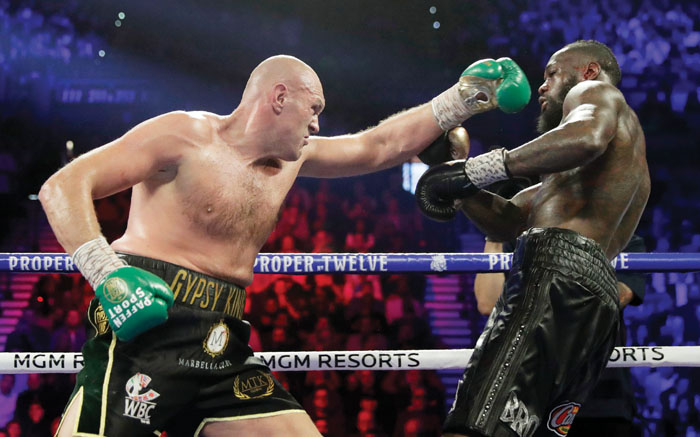 By TIM DAHLBERG AP Boxing Writer
LAS VEGAS (AP) — Tyson Fury is a heavyweight champion once again, dominating Deontay Wilder in their title rematch Saturday night before Wilder’s corner threw in the towel in the seventh round.
A boxer in their first fight, Fury went on the attack in the rematch and knocked Wilder down twice before a flurry of punches in the seventh prompted his corner to call an end to the highly anticipated rematch.
Fury dropped Wilder in the third round with a right hand that seemed to take the legs out of the champion. He put him down again in the fifth round, this time with a left hand to the body.
The end came at 1:39 of the seventh round when referee Kenny Bayless stopped the fight after Wilder’s corner threw in the towel as he was getting pummeled in a neutral corner.
It was the first loss for Wilder in 44 fights, and it came in the 11th defense of the title he won in 2015.
Fury stalked Wilder almost from the opening bell, using his jab to control the early rounds. He won every round on the scorecard of the Associated Press and was in total command of the fight when it ended.
Wilder briefly protested the stoppage, as a pro-Fury crowd at the MGM Grand hotel roared in delight.
Fury had bulked up to 273 pounds for the rematch, vowing to change tactics and become the big puncher. He was true to his word, dominating early with a jab that stopped Wilder in his tracks and then landing combinations to the head and body.
The rematch drew a sellout crowd that set a record of more than $17 for the live gate and was expected to do well on pay-per-view. Both fighters were guaranteed $5 million but could make $40 million apiece.