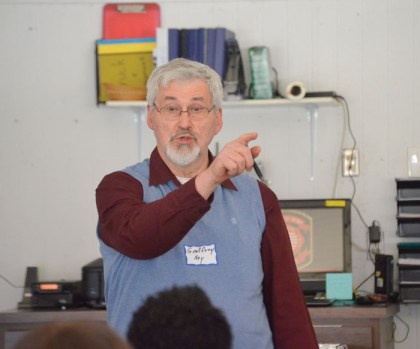 Geoffrey Hoy, who is running for NC Senate District 33, speaks at an informal forum held Saturday at the Scotch Irish Fire Department in Woodleaf. About two dozens residents gathered to hear from candidates about the often-discussed issue of the lack of broadband internet connectivty in the area. Shavonne Walker/Salisbury Post 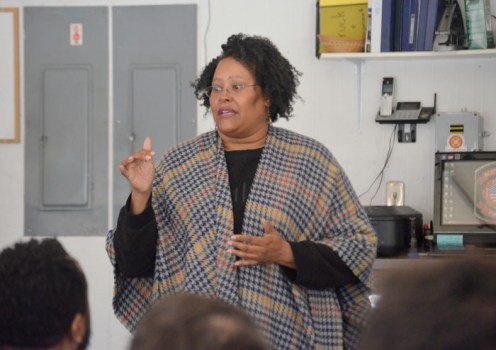 Al Heggins talks to a group gathered at the Scotch Irish Fire Department who were in attendance to hear about broadband connectivity. Shavonne Walker/Salisbury Post 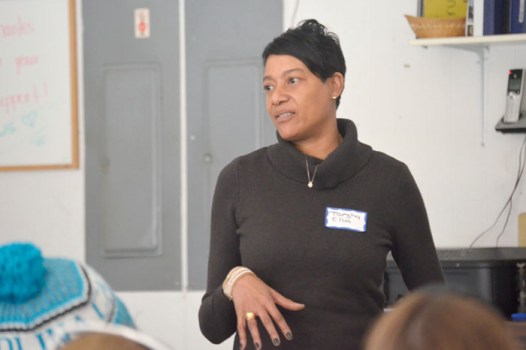 Tarsha Ellis is running for NC Senate District 33 speaks at an informal forum held Saturday at the Scotch Irish Fire Department in Woodleaf. About two dozens residents gathered to hear from candidates about the often-discussed issue of the lack of broadband internet connectivty in the area. Shavonne Walker/Salisbury Post

WOODLEAF — Malvia Houpe has a daughter with health issues who requires a device to monitor her heart, but she worries the lack of a clear broadband internet connection will interrupt information getting to her daughter’s doctors.

Houpe was among a group of about two dozen people gathered Saturday morning at the Scotch Irish Fire Department to hear from local political candidates running for state and federal positions.

Michael Stringer, who organized the forum, said he did it as a way to hear thoughts from candidates about the lack of broadband internet coverage and weak connectivity — an issue that strikes a chord with many of those who live in the Woodleaf/Cleveland areas.

“My hope is they will hear our needs out. We are here to let them know our needs are just as important as people in the city. We need good representation,” Houpe said.

Ellis, who kept her comments brief, said she would make sure that Cleveland and Woodleaf residents’ needs are heard. She said it makes sense that, if the schools send tablets home for children to do homework, they all have access to connect to devices.

Hoy said he recently took a tour of the area with Stringer and said it all comes down to voting.

“We need the money allocated for the information highway to make it possible for children now,” he said.

Hoy said it is a matter of pulling in funding and working together to get what the community needs.

Heggins spoke about the connectivity of Fibrant, now Hotwire Communications, and what something like that could bring to a community like Woodleaf.

Heggins said, although the seat she’s running for doesn’t serve the Woodleaf area, in order to make something happen it would take making connections and teamwork.

“I know you have friends in the 76,” Heggins said.

Huffman, who worked in the technology field, encouraged those in the audience to not lose hope and that they will work to expand broadband internet.

One of the reasons there isn’t a wider area of broadband internet is because there hasn’t been a push to expand its reach. He spoke about being a small business that wanted to expand and being impeded by lobbyists who influence legislators.

“What we want to do is get money out of politics,” Huffman said.

Stringer said he received a considerable amount of help in organizing the event and that there are future planned events from Sarah Shaefer, who is with Mike Bloomberg’s presidential campaign. He extended invites to both the presidential campaigns of Bernie Sanders and Elizabeth Warren campaigns, both of whom said they were busy.